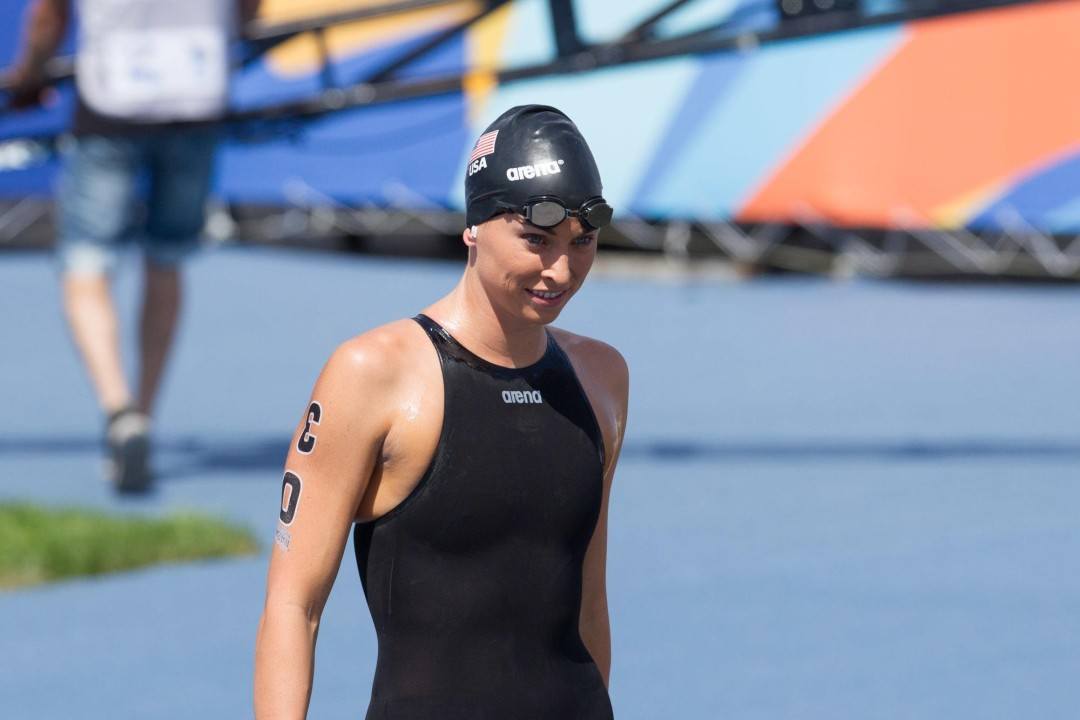 Two time Olympian Haley Anderson became the first American woman to win an Olympic medal in open water swimming by winning a silver medal in the women’s 10K at the 2012 London Olympic Games. Four years later at Copacabana Beach in Rio, Anderson placed in fifth overall, just missing out on the podium but fighting strong to the finish. In the violent open water competition this summer in Rio, French swimmer and the reigning world champion Aurelie Muller was disqualified from the event after a controversial finish. Muller swam over Italian swimmer Rachel Bruni to touch the wall for second place and was quickly disqualified for her unsportsmanlike tactics. The race was a battle to the end and although Anderson missed out on the podium, she never gave up on herself and was able to walk away with pride knowing she gave it her all.

Last month in Venice, Calif., Anderson took the time to reflect on her Rio experiences with Excelle Sports.

Vandenberg: How was Rio for you? Are you happy with your performance?

Anderson: It took me a while to be happy with my performance. I think being on the U.S. team, especially with the U.S. swim team, if you don’t come back with a medal, it’s kind of like, not looked down upon, but you’re just another person and you forget that it took a lot of hard work to actually get to the Olympics and to get to this level, so it took a while to be happy with that. I did well in London so coming back to Rio, I had expectations for myself and I think that was hard for me. I thought there was pressure from everybody else but really it was just me and the pressure I was putting on myself.

Vandenberg: How did you feel during the race?

Anderson: It was good. It was a bit violent, I was getting pushed around and that happens sometimes in open water so I was getting a little frustrated. I learned in the past not to get frustrated but sometimes you forget that and so that was my mistake, getting frustrated by being pushed around a little bit in the race. I’m happy with how I did, I didn’t position myself well going into the last lap, I got beat up a bit going into the last lap.

Vandenberg: What kind of violence are you talking about?

Anderson: I was getting swallowed up by the pack and girls were swimming over me, sometimes the officials don’t see it but it happens. Someone swam over my shoulder and I was one row back and one of the girls broke away and I didn’t see that. I was seated like fifteenth or something going into the last lap. I could have been content not getting a medal, but I didn’t give up. I am proud of myself for not giving up and doing the best I could with the position I put myself in. Looking back at how I handled it, I am proud of myself.

Vandenberg: How was the water?

Anderson: That was the hardest thing about this whole year, we qualified a year out and we have been answering this question all year. Honestly, the water was fine. I swam there before in January and I was fine, it was all about the media hyping it up. It wasn’t the cleanest water I have swam in but it wasn’t the dirtiest water either.

Vandenberg: What was the dirtiest water you swam in?

Vandenberg: Did you get really sick?

Anderson: No, it is just really smelly.

Vandenberg: Gross. That is a bit like swimming in some Brooklyn city pools!

Anderson: Growing up I trained at a city pool too and so it was the same in the summer, we had this structure with all these games on it and we always thought we would get out if we put a chocolate bar at the bottom of the pool.

Vandenberg: HA! So how did Rio compare to London? Was there a difference in your training?

Anderson: There is always a difference, each year is never the same. Leading up to London I was still in college (USC) and that is totally different than being a professional. In college, it is different, you wake up and you are part of a team. When you are a professional, it is hard to learn how to motivate yourself.

I was training with a lot of international male swimmers but I never really had a consistent girl to train with. This last year, I trained with some of the freshman distance swimmers, it was so refreshing. They were so excited about everything and they really helped me with their energy.  Every year has been different, even if you don’t plan on it. I did a few training camps to altitude in Colorado saying to myself and knowing in my head that I did everything I could do to be prepared.

Vandenberg: Did you do anything different in training out of the water?

Anderson: Well I never had a consistent dry land coach in college, I didn’t really take it too seriously. My first year out of college, I started pilates and I really enjoyed that. The last two years I have been working with Amanda Wittenmyer, a strength and conditioning coordinator at the U.S. Olympic Training Center in Colorado Springs.

It was good to have someone who knew swimming since she swam in college. She knew that I needed specific things to strengthen my shoulders and maintain a healthy body. A lot of it was injury prevention.

Vandenberg: Did you watch the other sports in Rio?

We did a lot of sight seeing too, we saw sugarloaf which was probably one of my favorite things. I had a lot of our family friends there too. We had about thirty people. It was the first time everyone was there just for me, usually everyone would come for me and my sisters. That is what swimming has always been about. My sisters both swim and we all grew up around the pool for summer league.

Vandenberg: Did you explore the cuisine?

Anderson: I thought their bread and pastries were really good down there. We got a few street things as well, I got this delicious street churro with Dulce de Leche.

Vandenberg: Did you stay in Rio or did you get to travel after?

Anderson: We stayed in Rio a bit and then afterwards I went home to Northern California with my family and did nothing, so it was amazing.

Anderson: I am still in that limbo. I feel like people don’t really talk about that, it is really scary. It is something you don’t want to think about too much before the Games, you don’t want that on your mind but the after part is really scary because it is not something you are prepared for. We spend all these years being focused on this moment and all of the sudden you are moving on, I am scared of the next step and starting over and you are at the bottom and need to work your way up.

I think I want to travel and I have a few things in the works, I think it is just getting over the excuses I am making for myself. I am interested in interior design and fashion.

Another American athlete with good things to say about Rio including the open water ‘ All 30 fsmily members returned safe with no muggings . It is not stated but maybe they even filled up at a gas staion without drama & as paying customers used the bathrooms.

If this keeps up some SwSw ers might even begin to feel a bit guilty attacking Rio & Brazilians . No not really .