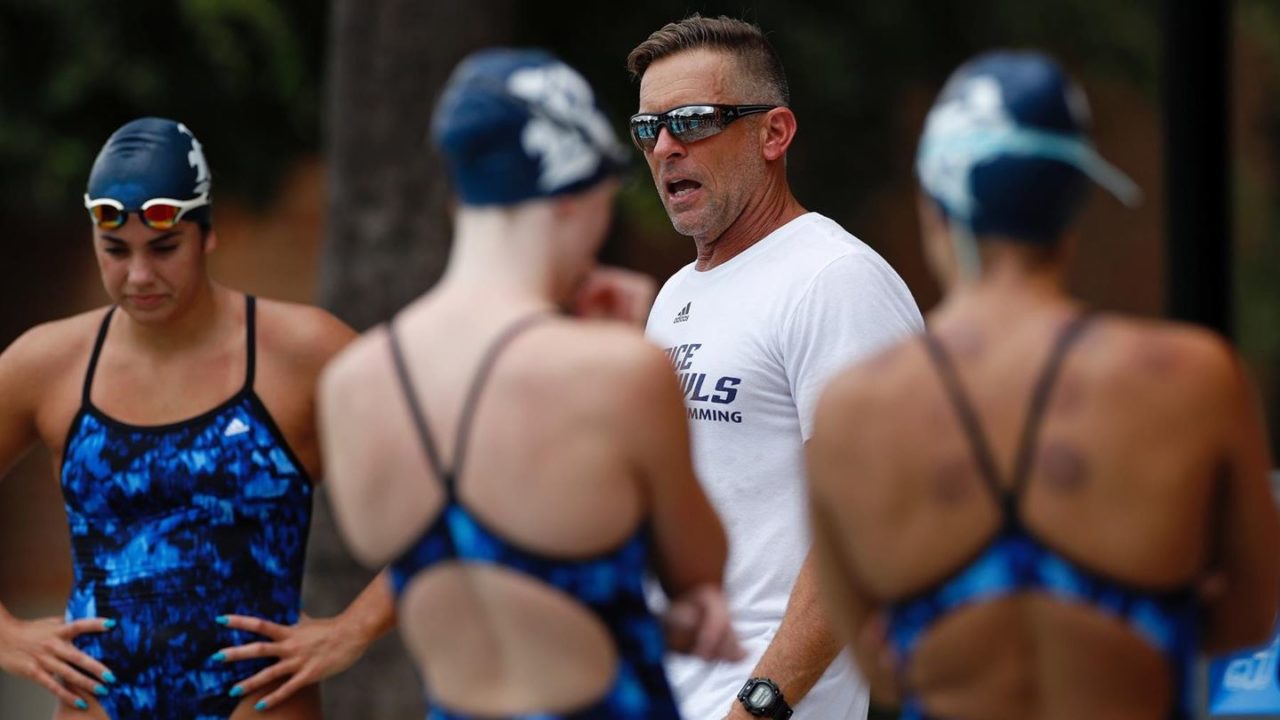 Huston believes the lack of change is accomodating Lia Thomas while failing to recognize the impact it's having on "thousands" of others. Archive photo via Rice Athletics

The first active Division I coach has spoken out on the ongoing transgender debate in college swimming.

In light of the NCAA ruling on Wednesday and subsequent statement from the CSCAA on Thursday, Rice University head coach Seth Huston has made his stance on the issue public.

Huston criticized both the NCAA policy change, which essentially passed off the responsibility of making a decision regarding transgender participation to each sport’s national governing body, and the CSCAA statement, which stood in support of Lia Thomas competing at the Women’s NCAA Championships in March.

“The NCAA once again has proven that it is not leading. It is not really even following,” Huston said. “The NCAA governance has become a bystander waiting for other organizations to make tough decisions. They hoped NIL would continue to be suppressed and now they are scrambling to make it fit their construct. Now they sit on the sidelines with Transgender issues.

“The CSCAA is right in being frustrated with NCAA Leadership or lack thereof, but wrong to suggest Lia compete at NCAAs.”

Huston, who is in his 19th season as head coach of the Rice swimming program and was named one of the CSCAA’s “100 Greatest Coaches” in 2021, says that Thomas has the right to compete this year, but not in the women’s division.

“I respect Lia Thomas, her transition, and all of that,” he said. “And I am completely OK with (her having) the opportunity to compete. because that would be a Title IX issue.

“But I think another thing within Title IX is that we have to be given time to accommodate, I guess you could say. Whether that is creating a third division, a transgender division, or whatever.”

“No person in the United States shall, on the basis of sex, be excluded from participation in, be denied the benefits of, or be subjected to discrimination under any education program or activity receiving Federal financial assistance.”

“In the meantime, Lia has every right to compete. But I think, black and white right now, you compete as what you were biologically born until we get to a point where we’ve expanded opportunities, you know for instance, in transgender.

“I get Title IX, I understand it, Lia is completely within the law to do so. But there are other ways I think we can be accomodating and making opportunities for Lia without hurting a whole of others.”

Huston says that right now, organizations and governing bodies are fully accomodating Thomas and her decision without taking into account the impact it will have on everyone else.

“I just feel like we’re bowing to, in this particular instance, to one person,” he said. “And really to the detriment of thousands of other athletes potentially. And I don’t think that’s right.

“I think there’s going to be a lot of frustrated competitors, and families and fans in the sport in the end if we continue down this short-term road right now.

“Again, I’m not saying she can’t compete. But in this instance or in this forum, it’s patently unfair to all the other competitors.”

Thank you, Coach Seth!!! I knew Rice Swimming was the BEST team for my daughter!!!

I agree with the coach. One persons participation should not be allowed to ruin all other competitors. Women’s sports should be kept for females only.

What’s not being discussed in the comments is Seth’s spot-on vocal criticism of the NCAA. “Not leading or following” is perfectly stated. Just cowardly abdicating and kicking the can down the road. The failure of courage in sports moral leadership is what allows the Nassars of the world to run amok. It is unforgivable.

Thank you Coach Huston for addressing this logically. Having read many articles regarding the transgender swimmer issue, there seems to be overwhelming support that Lia should be allowed to swim. The issue is how these times should be counted. Someone is not transphobic if options are being discussed as to what is considered the scientific range of testosterone levels acceptable within the women’s category. Many have made this very personal to Lia herself on both sides which has created so much bias based on feelings rather than facts.

Athletics from a young age are not fair, whether it be the coach’s kid getting special treatment, kudos given to undeserving, or opportunities being taken away. That is why we need… Read more »

Can’t all of the ‘records’ reflect a ‘T’ after the name indicating orientation? Or ‘P’ for pan gender. I feel like they’re making it more difficult than necessary. Just build out a new category based on born sex and current orientation. A third category would not be difficult to implement. The ‘female’ records are not actually being broken, but the Transgender records are not being acknowledged as they rightfully should be. Denying that acknowledgment as a transgender record is like saying I don’t see you for who you are, and accept you for who you are…it should be offensive to them. Just support building out the category. If a mixed swim occurs, acknowledge male/female/trans male/trans female/ pan gender participated. It… Read more »

I’m not necessarily disagreeing with you, but I think part of the issue is that some (many? most? no idea) trans people just want to live normal lives as men or women without any sort of asterisk next to their name, regardless of how open they want to be about being trans.

I fully support what Seth said, and I admit that I’d be biased toward siding with the biological women. However, I think there are many ways to approach the issue. The fact that the NCAA didn’t come up with a solution yet is probably indicative of the fact that there may be no solution that can make everyone happy.

If people raise the issue of biological advantage, does… Read more »

Finally, a coach who actually has the guts to come out and protect the integrity of women’s swimming and the rights of thousands of hard working NCAA swimmers. Thank you.
Now we need more to speak out. Who is next?

Thanks to Coach Seth for speaking out on this issue, he definitely deserves a pat on the back. His opinions are fair and hopefully more athletes and coaches will express their thoughts and provide the impetus for an actual practical solution to be implemented-soon!

Good for Seth. I’m proud of him standing up and taking a well-articulated stand. Great representative of Rice (and The Univ of Tampa).