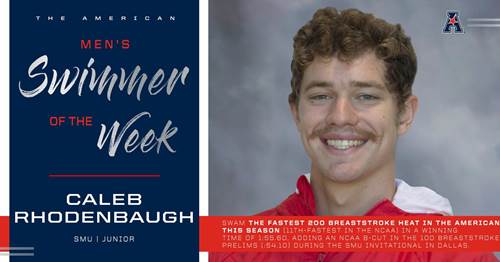 Caleb Rhodenbaugh and Peter Smithson were honored by the American Athletic Conference as the league's top performers following the SMU Invitational.

Rhodenbaugh posted a pair of NCAA B Cuts in breaststroke events to help lead the Mustangs over the weekend. His 1:55.60 in the 200 breast won the race and was a career-best performance. It also places him third on SMU’s all-time top performer list and is the 11th fastest time in the NCAA and leads the conference.

In the 100 breast, the junior clocked a 54.10 for the top seed coming out of prelims and finished fourth in the Championship Final. The time makes him the seventh fastest Mustang all-time in the event.

Smithson won both 3 meter (358.85) and platform (350.10) to help SMU sweep diving events at the Invitational. He was also second on 1 meter (318.65). All three scores met the NCAA Zone qualifying mark and the 3 meter and platform scores were career bests.
The Mustangs took home the team title at the event, outscoring their closest competition by more than 270 points.

Smithson and the divers return to action Jan. 3-5 for the Tennessee Diving Invite, while the full team hosts West Virginia Jan. 17.