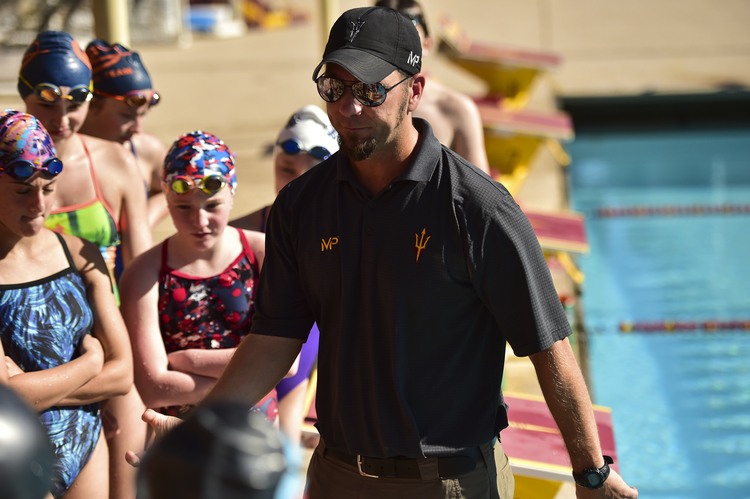 The Reno Aquatic Club has announced Ryan Mallam as its new head coach. He replaces Brian Holm as the team’s head coach.

Mallam comes to the club ranks from the college level, where he’s spent the last two seasons as the associate head coach at Arizona State. There, he was the first hire by Arizona State head coach Bob Bowman, who was also the head coach of the 2016 U.S. Men’s Olympic Team (and longtime personal coach to Michael Phelps).

“Ryan has a way of looking at swimming with fresh ideas and viewpoints,” Bowman said of his former assistant. “His skill of vocalizing those innovations to the athletes is second to none.”

Mallam left Arizona State just over a month ago.

Prior to Arizona State, Mallam spent 2 seasons as associate head coach for the Texas A&M, and for 3 years before that he was the head coach of Indian River State College – the top Junior College program in the country.

As an athlete, Mallam swam at South Carolina, where he was a 4-year letter winner and qualified for the U.S. Open Championships. After finishing his undergraduate work, he completed his law degree at the John Marshall Law School.

“I am extremely excited for this opportunity to coach at Reno Aquatic Club,” Mallam said. “I look forward to getting back to club coaching, working with the staff, and meeting the athletes in the coming weeks.”

The announcement coincides with the Reno Aquatic Club’s celebration of its 45th anniversary. The team is recognized as a bronze medal club, making them one of the top 200 clubs in the country.

The full press release from the club is below:

August 9, 2017   FOR IMMEDIATE RELEASE  Ryan Mallam will become the new Head Coach of Reno Aquatic Club in Reno, Nevada September 1, 2017.  Since 2015, Ryan was Associate Head Coach for Men’s and Women’s Swimming at Arizona State University.  Ryan worked with the combined men’s and women’s teams at ASU under Head Coach Bob Bowman and was Coach Bowman’s first hire at ASU.  “Ryan has a way of looking at swimming with fresh ideas and viewpoints.  His skill of vocalizing those innovations to the athletes is second to none.”—Bob Bowman, 2016 Head Men’s Olympic Swimming Coach/Head Coach ASU Swimming and Diving

Prior to Arizona State, Mallam was Associate Head Coach for Men’s Swimming at Texas A&M University from 2013 to 2015.  Prior to A&M, Mallam served as the head coach of perennial NJCAA powerhouse Indian River State College from 2010 to 2013 and led the men’s and women’s teams to three NJCAA National Championships.  Ryan is a coaching innovator and swimming technique guru and has taught clinics at the national level on technique and sprinting using fresh and creative ways to swim fast.

Mallam says “I am extremely excited for this opportunity to coach at Reno Aquatic Club.  I look forward to getting back to club coaching, working with the staff, and meeting the athletes in the coming weeks.”

Ryan graduated from the University of South Carolina with a degree in Business Administration where he was a four year letter winner and qualified for the US Open.  Ryan also graduated with a law degree from John Marshall Law School.  Ryan enjoys running marathons and playing the guitar.  He has a son Levi and a Rhodesian Ridgeback named Arrow.

The swimmers and families of Reno Aquatic Club are excited to bring Ryan to Reno to continue the great traditions and swimming excellence with Reno Aquatic Club.  He will bring his strong coaching background, his innovative techniques, fresh perspective and strong leadership skills to Reno Aquatic Club.  We look forward to his arrival and having him on deck soon.

What happened to Mallam anyone know?

MALLAMS OUT OF RENO AQUATIC CLUB!!! That didn’t take long and puts all these pro-Mallam /pro-Reno comments into the BS category.

Yeah but who even is Erik Scallise. I have never seen him before?

Ryan Mallam will change the face of swimming here in Nevada more than any other coach has done before.

Reno is lucky to get Mallam, he will be amazing for the area.

I completely agree. I only got the opportunity to swim for Ryan for about a year, and even then I was only in his group only 4 times a week, but not only does his resume of athletes speak for itself, but I can attest personally to the almost laser focus he has on seemingly dozens of small details at once. I remember one day we were doing some 15 meter sprints on camera and we would hop out of the water and go watch the video with Ryan and we’re talking about maybe a 5-second video clip but Ryan would talk to us for 5 to 10 minutes about every little thing that we can do a little bit… Read more »

Unfortunate autocorrect. I think you meant “known him long enough”.

And you’re talking about college swimming. This is age group swimming. Ryan won’t be able to curse out his swimmers anymore. Keep on blowin though.

Anyone know what is up with Brian Holm, where will he be going?

When I asked him about it, he said he loves Reno, will stay in Reno, but that he’s retiring. He is NOT leaving on bad terms.

So everyone’s happy, except that Scalese character!

Can you provide a name or two that Antonin Scalia helped make into NCAA finalists, champions and Olympic finalists? Cuz Ryan’s done both and I’m drawing a blank on Mr. Scablice

Mallam is amazing he won’t care what you think you have taken over !

Scalise has done a great job creating a year round rec team. I will wait for him to produce a competitive swimmer before taking him seriously though. He’s been working on it for what? 11 years now? 12? And no, his little brother doesn’t count, he was developed by another team.

You’re not wrong, but I think the progress is noticeable despite RAC doing everything possible to prevent their growth. Scalise is coming just like Omar.

Mallam will encourage growth in the sport and unity between teams. Everyone in that zone of Pacific Swimming should be excited.

As an outsider to both teams looking in, I think your faith is a little misguided. If by progress you mean which team is getting bigger, nobody cares who has the bigger team. People care about their kids swimming fast and having fun and there are only 2 teams in Reno doing BOTH right now… and you aren’t one of them. RAC and LAKE are the only teams not getting more and more lane time and are the only teams producing. Facts are facts.

Why would a smaller team need more pool space? I think they have only been around since 2009 and appears to be much larger than the others. Shouldn’t more kids mean more pool space?

Wow what a lucky team to have Mallam at the helm!