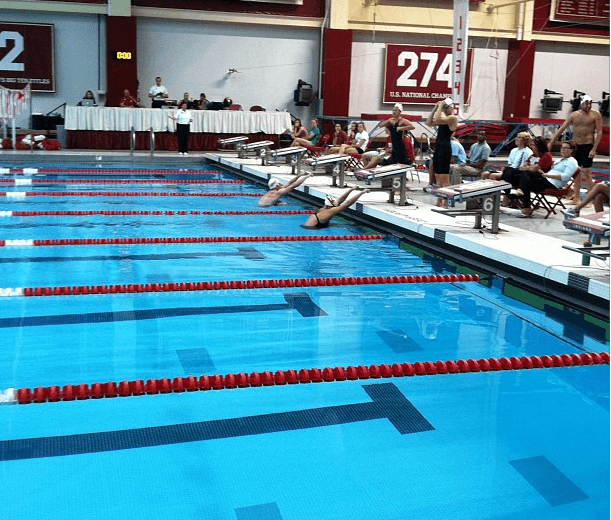 We will update this post with all of the results from the Indiana Relay Rally, where the Hoosiers are attempting to set World Records in the 8 new relays recognized by FINA beginning Wednesday. Note that all records are not official until FINA ratifies them, verifies doping controls, and the pool is measured.

The Indiana relay of Matt Gerth, James Wells, Stephanie Armstrong, and Olivia Barker took 2nd in 3:48.01. If USA Swimming begins recognizing National Age Group Records, then it would go to the Bloomington Swim Club for 13-14’s, who took 4th overall.

#2. Mixed 400 Medley Relay (Long Course Meters) – Allie Day, Mike Hurley, Tanner Kurz, and Haley Lips combined for a 4:13.47 in the mixed 400 medley relay. Again, the Hoosiers had to use a breaststroker on their butterfly leg, like they did more-than-once in championship season in 2013, but fortunately they have incredible depth in that event.

#3. Mixed 200 Medley Relay (Short Course Meters) – James Wells, Cody Miller, Gia Dalesandro, and Olivia Barker won the mixed 200 medley after the pool was changed from long course meters to short course meters. Their final time was 1:49.87. Wells led off in 26.47 and Miller followed with a 28.56 50 breaststroke split. The women finished off the relay, with Dalesandro splitting a 27.81 and Barker anchored in in 27.08.

The team of Allie Day, Tanner Kurz, Bailey Pressey, and Matt Gerth finished second with a time of 1:51.05.

The European Record for the Mixed 200 Medley relay was swam at the 2012 European Championships by France with a time of 1:38.74.

This race has been swam at the European Short Course Meters Championships and in 2009, a team from the Netherlands had the WBT (World’s Best Time, as opposed to a WR) with their time of 1:42.69. That swim in 2009 was before the new FINA rules went into effect, and therefore can not count as a FINA World Record.

The name in #2 is Gia Dalesandro

Great idea, I could have had a world record

Exactly. I was being a bit too . many still remember clearly the night Shane broke it. spectators took over an hour to file in .

What a night under the Harbour bridge ! They used to have to stand down off the blocks if. Train went by. Then there were the screams from the Big Dipper at next door Luna Park.

Now that was a real world record. What Is this rubbish? A 58 lol.

World records usually have a story that makes them exceptional.