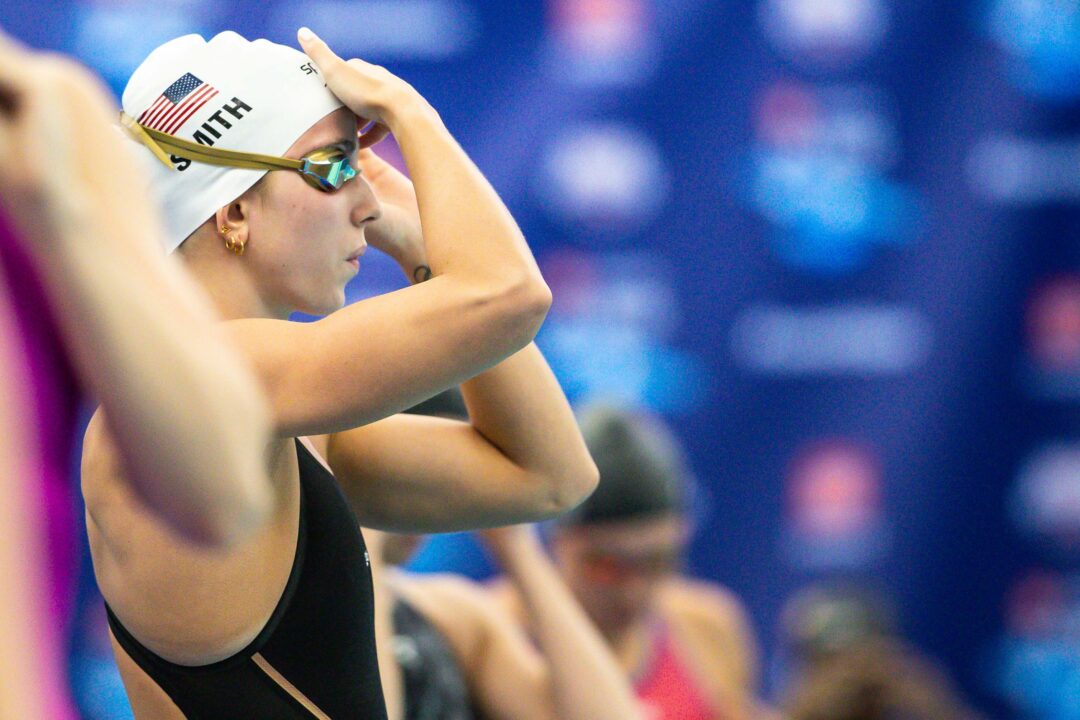 Regan Smith shattered her previous meet record time of 2:07.09 by nearly two seconds, and swam her fastest time since she went 2:03 twice in 2019. Archive photo via Jack Spitser/Spitser Photography

Had Smith swam her time tonight at the World Championships, she would have won bronze. However, she still would have been 0.15 seconds off White’s 2:05.13 that finished second at trials.

In recent years, Smith has struggled to make international teams in the 200 back following her major breakout in 2019. At the 2021 U.S. Olympic trials, she led for 150 meters of the race before fading on the final lap and finishing third in a time of 2:06.79 t0 miss the Olympic team. The same feat struck her in 2022 at the World Championships trials, when she swam over a second faster than trials (2:05.65) but still finished third to Rhyan White and Phoebe Bacon, missing the team once more.

In Smith’s first meet as a pro training under Bob Bowman, she has produced spectacular results, including a 2:10.40 best time in the 200 IM, and a U.S. Open meet record time of 57.95 in the 100 back. If she continues these kinds of strong swims into 2023, she could finally reclaim an international team spot in the 200 back and potentially a gold medal.

Glad to see Regan improving again, she obviously needs the challenge of tough practice like she had with her club coach, Mike Peratto. Good decision Regan!!

Regan’s not-so-secret weapon, apart from her great underwaters, is her incredible turnover. She looks as if she’s taking one and a half strokes to her competitors’ one. (Obviously, she’s not, but it *looks* that way.) Doing that takes incredible conditioning, so for someone like Regan, Bowman’s tough workouts are key.

Happy to see Regan doing well now. I have a feeling that she’s going to make it back onto the US team now in the 2 back again. But it’s not going to be easy. But if she makes it at trials then she will go off at worlds.

Isn’t obvious she used her full taper to qualify. It’s really tough to make the US Olympic and World Champs teams.
Only exceptions are people like Phelps and Ledecky who’s so far ahead of the US competition that they can semi taper for the trials and still make it.
Hardest team to make in the world

No thanks to Greg Meehan.

Give it a rest

Agreed. Kudos to those who can both study and swim.

She did better with Greg than she did in her last year with Mike Parratto who had coached her to a world record. That’s not because Mike suddenly forgot how to coach Regan, but because there’s a million factors that can play into athlete performance. Even more so dealing with the stress of a global pandemic.