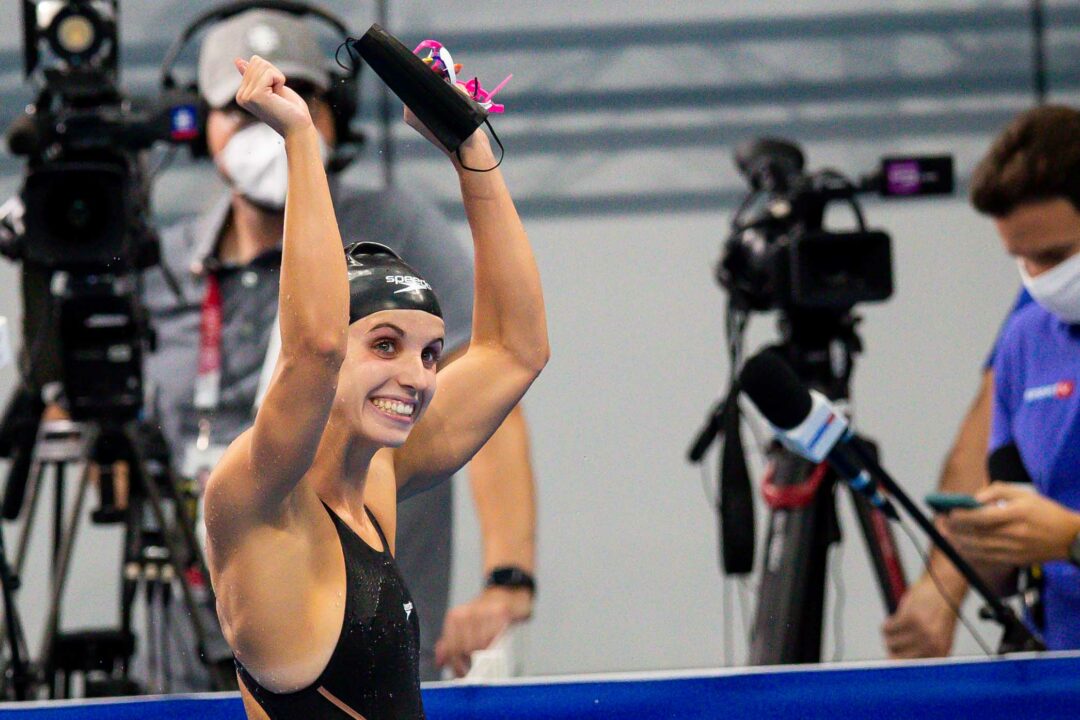 Smith has won every individual event that she has competed in for Stanford this season. She picked up two more wins against USC. Archive photo via Jack Spitser/Spitser Photography

The USC women hosted the Stanford women for a dual meet on Saturday January 22nd. Stanford has won every dual meet between the two dating back to 1999 which is as far back as the records go.

The Stanford women won the meet with a score of 174-126. The team was led by Regan Smith who earned two individual victories of the day. So far this season, Smith has won every individual event that she has competed in at dual meets. Her only non-first-place finishes have been when she exhibitioned the 500 freestyle, which she has done twice. She won both the 100 backstroke (51.51) and 100 butterfly (52.62). Those times were about the same she went a week ago in the dual meet against Arizona as she went times of 51.47 in the 100 backstroke and 52.43 in the 100 butterfly then. Smith currently holds the top time in the NCAA this season in the 100 backstroke as she went a 49.97 at midseason.

Small criticism… but triple column results are an atrocity

are are we gonna call White or Smith for our prediction in the 200? 👀

Does anyone think she might swim the 200 fly instead of the 200 back? I think that’s an easier path to a NCAA title and more points for Stanford.

The race between Smith, White, Berkoff and Bacon in the 100 back was already going to be epic. Throw in McNeil and Walsh, the race could be the most thrilling ncaa event ever.

We might see all of them lead off medley relays in the same heat except maybe bacon. Idk what the Wisconsin relays are like

Put some respect on Isabelle Stadden 😤

She’s a true beast. Absolutely love to see it.

I’m looking forward to Regan vs. GWalsh in the 100 back at NCAAs. Regan is the AR holder and heavy favorite — but I don’t think there’s any doubt GWalsh is going :49

GW the favorite after that 23

Berkoff has been 23.7 unsuited this year as well. We’ll see what happens when the suits are on and the titles are on the line.

multiply 23 by 2 and you get 46. Thats for all the math challenged college kids

I think GW is the favorite for the opening 50 – Regan will have better back 50. Who wins? Might just depend on who’s swimming on fire in March.

Who can swim 40 yards of backstroke and 60 yards underwater the fastest. Thats who wins.

you don’t need the same endurance to come home SCY

Gretchen Walsh won the 100 free gold medal at world juniors in 2019 in 53.74 when she easily beat Torri Huske and Meg Harris. She had a strong back-half that year. Meg Harris swam 52 last summer while Gretchen Walsh has moved a lot backwards in 55. Let’s hope that she will find her 100 free magic again soon with her new training environment at UVA and doesn’t focus too much on backstroke in the next few years to the detriment of freestyle. USA doesn’t need another backstroke female star. However they badly need new stars in the 100 free if they want to finally bring back home the 4X100 free relay gold medal in 2024. Last time was in… Read more »

Wow according to commenters votes GW is a 6/1 underdog. That’s bulletin board material for Desorbo.

UVA’s website says that Gretchen went a 48.73 at Cal. Even listing it on the records. Not sure if that confirms the time or not.

and Kate Douglas split a 41 on same relay!!!! It looks like a mixed relay and I think the guys times were credited to the girls and vice versa

Pretty sure she was 51 something at that meet.