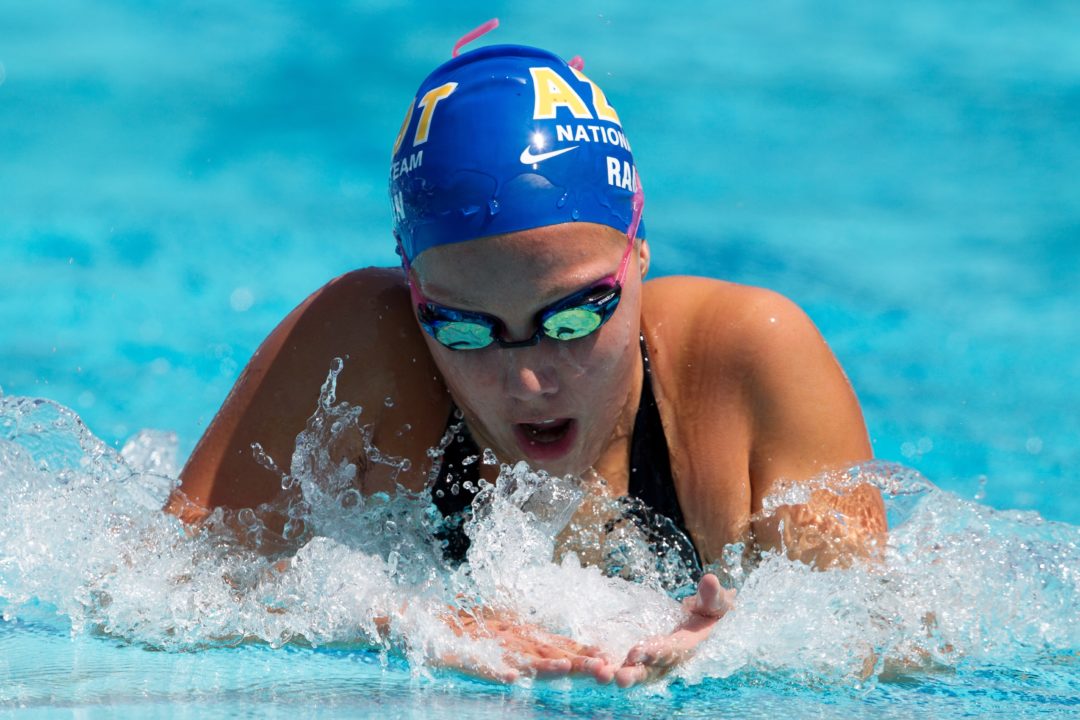 Recaps of American meets in Olympic years, don’t usually start with highlights from 50’s butterfly, but I had to make an exception for this meet.

That’s because in the first event of the 3rd finals session of the meet, 15-year old Mary Schneider from the Academy Bullets shot a 26.94 in the 50 fly. USA-Swimming records on 50-meter races are shoddy at best, but that has to be one of the fastest 50 fly’s we’ve ever seen by a swimmer this young. That time ranks her 30th in the world. She’s the third seed. Watch out for her in Friday’s 100 fly (where she’ll face off against Rachel Bootsma and Janet Hu, both of whom she smoked in this race). She very-well could break a minute in that race.

Meanwhile in the boys’ version of that race, the 24.07 swum by Renny Richmond out of the Lahaina Swim Club also puts him in the world’s top 30 this year. New Trier’s Reed Malone added a third runner-up finish for the meet by touching second in 24.96.

In the Olympic events, Curl Burke’s Katie Ledecky won the 200 free in 2:00.46 (after a 1:47.41 in the yards-course prelim). That’s among the top-10 times we’ve ever seen from a 15-year old even though this event stretches just below her better events: the 400 and 800. It does, however, help her keep pace with the other mid-teen superstars this year (Leah Smith and Gillian Ryan) who have also been 2:00’s this season.

Haley Molden out of the Topeka Swim Association took 2nd in 2:03.73, and Kendal Casey from Daytona Beach was 3rd.

Reed Malone finally got off of the schneid when he won the 200 free, one of his two best races, in an outstanding 1:50.97; more than two seconds ahead of a group that included Jack Conger in 3rd in 1:53.31. With Malone’s versatility, and still one more year to develop, college teams should be eyeing the junior as one of the top 10 swimmers in the class.

Also notably in the final, Malone and his teammates from the New Trier Swim Club broke 3 minutes again in the 400 yard free relay with a 2:58.20 (relays are not being raced in finals). Remember that this is the same group that became the first high school relay (in high school competition) to break three minutes at this year’s Illinois State Championships.

Yes Mary Schneider is a bomb. She’s a pure sprinter.
For Katie Ledecky, her 2.00.46 is in the 200 free and please don’t compare her to Leah Smith. She’s incredibly better than Leah Smith who is good but not fantastic.
I’m very disappointed by John Conger in the 200 free with 1.53.31 after prelims in 1.35.78. He struggles in long course but I’m sure he has a big talent in freestyle.
And 1.50.97 by Reed Malone is superb. He’s only 16. Perhaps he is the Cameron McEvoy of USA in the 200 free.