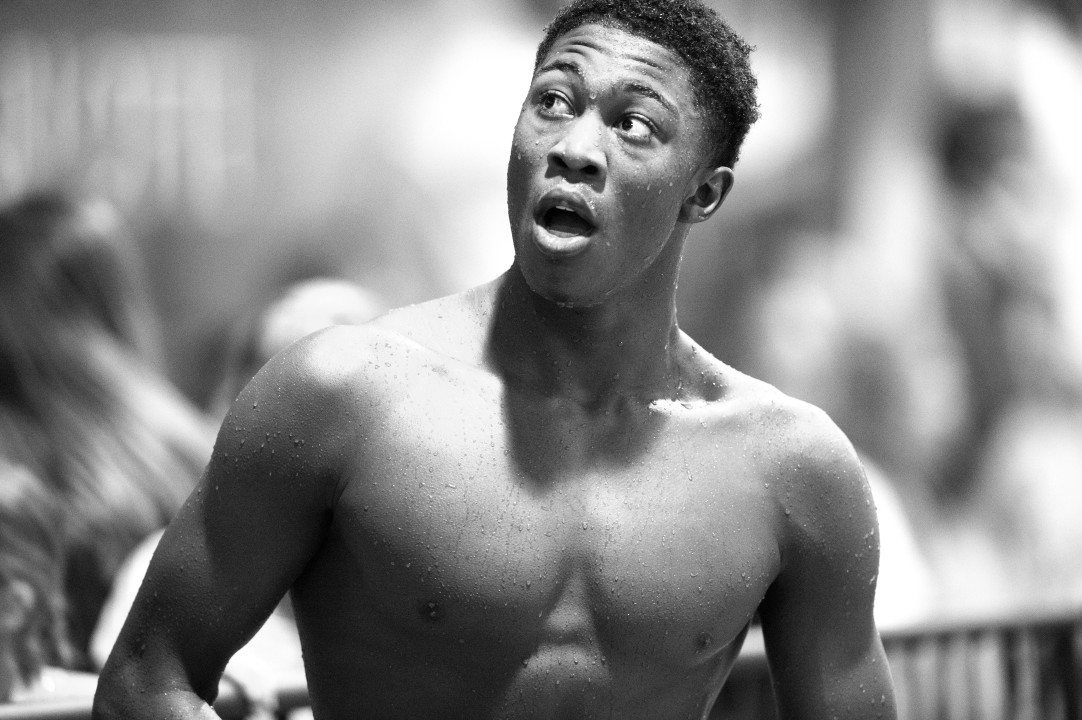 SwimSwam’s #1 recruit for the class of 2018 and Cal Berkley commit Reece Whitley has been named to the 2018 Young Futurists list by The Root staff. The list is comprised of 25 African-American influencers, ages 15 and 22, that are “brilliant and inspirational leaders who are already charting their own paths in the worlds of business, science and tech, the arts, social justice and the environment.”

The Root references Whitley’s many accomplishments in the pool, starting with his performance at last summer’s 2017 FINA World Junior Championships where he captured three silver medals and was one of five team captains.

Whitley, who has been breaking national age group records for years, was named Sports Kid of the Year by Sports Illustrated in 2015. At the 2016 Olympic Trials in Omaha, Whitley, then 16-years-old, placed 13th in the 100 breaststroke and 14th in the 200 breaststroke.

The Root contrasts Whitley’s successes in the pool with statistics gathered by the USA Swimming Foundation which reveal that “64 percent of black children have low- to no swimming abilities.” Regarding those shocking numbers, Whitley once said “I think as I get older … I’m going to need to take—play—a key role in kind of integrating swimming into inner-city communities a lot more.”

Per The Root’s Facebook page, “The Root provides an unflinching analysis of important issues in the black community through insightful and savvy commentary from black thought-leaders.”

Feels great to be a part of this list. Thank you! @TheRoot https://t.co/2QdOUQN9P8

The breast stroke is a difficult stroke and I’m glad you have embraced it. It’s the one stroke where you get audience participation on every stroke. Amazing and congratulations. I will be in Japan to see you swim. 😉

Congrats!!! That is quite an achievement that is well deserved. I can’t wait for him to go after the new 100 breast record next year at NCAAs.

Can’t wait to see him explode at Cal. This young guy has no limits. And he looks pretty cool outside of the water.

The swimming world and those who have witnessed Reece Whitley’s journey know this young man is not just a successful person but happens to be African-American. Our team and others never put color of skin above his towering height over his competitors, his size 12 feet when he was 12 years old and his hands that made a basketball look like a tennis ball in his hand as something unique. His swimming excellence is captivating. He will be a great USA Swimming National Team member.

Congratulations to a fine young man!

I think we are getting closer to the day we don’t we African American swimmers for race, just damn good swimmers; even if they have to negative split a 100.

What a stupid comment! Excellence speaks for itself, and when a member of any community is excellent, it’s wonderful when a community (whether it is forged around sports, gender, race, nationality, sexuality, geography, religion, etc.) celebrates that excellent member.

I don’t think it’s a stupid comment. Some people base accomplishments not on “gender, race, nationality, sexuality, geography, religion” but on if you’re good you’re good. The only “membership criteria” is being human. Is that really so bad? Some people make a list of “Top 10 Irish Directors of All-Time”. Neither is bad, just a different way of looking at things.

Yes we are getting closer to that day, BUT we are not there yet. There are still large communities in this nation who are STILL discriminated against, and have been for 100s of years. Do you throw a fit every time there is a list the top athletes in NFL because “why not just say athletes and include ones from all sports?” I doubt it. I would also bet that you are someone who would complain about, or make a comment about Black History Month by saying “why do they need a whole month…why not a white history month?” or deny the existence of systemic racism (which is only perpetuating it). Am I correct?

I do have a question about… Read more »