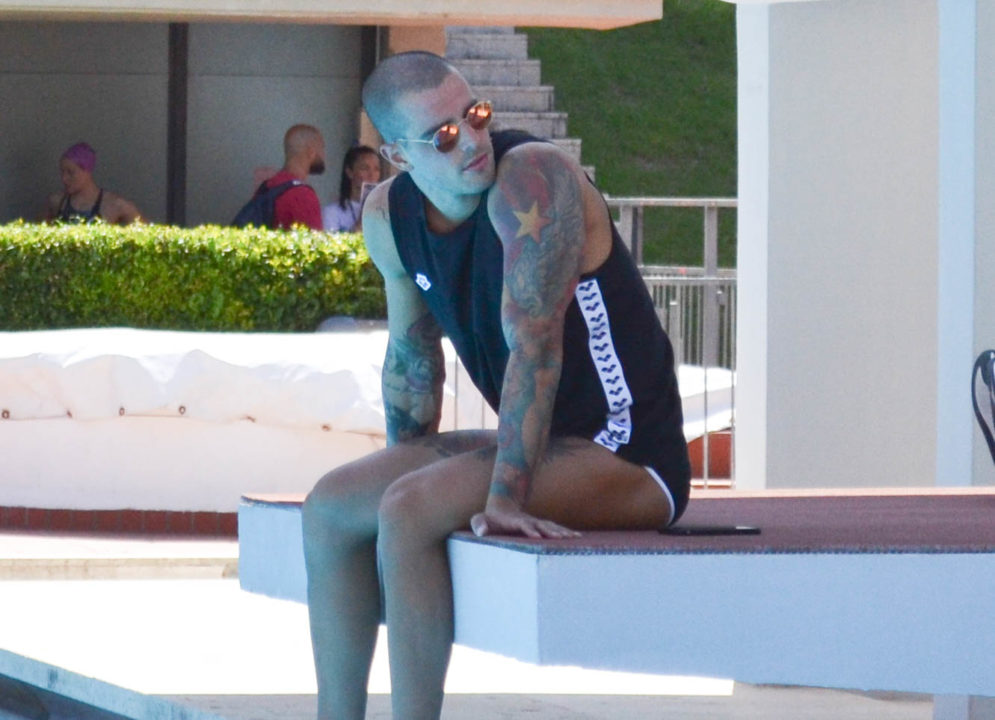 Does Bruno Fratus love Monopoly? Which book is helping Aimee Willmott pass the time? Check out what elite swimmers are reading, watching & gaming while home. Archive photo via Giusy Cisale

As the coronavirus (COVID-19) pandemic continues to unfold essentially minute-by-minute around the world, one thing we know is that athletes across all sports are off the field, away from the court and out of the pool indefinitely.

Most swimmers already had comprehensive strength and conditioning programs built into their overall training regimens, but they are now forced to rely on just those athletic outlets until they’re able to finally get wet once again.

Besides dryland training, your favorite elite stars are also keeping their minds sharp by catching up on books they’ve been meaning to read, watching their favorite shows, or playing games with their also-quarantined housemates to help pass the time purposefully.

I reached out to several swimmers stationed around the globe to find out what they’re watching, reading, and gaming nowadays.

I like watching documentaries. I saw ‘Tiger King’ lately; that was absolutely nuts. For books, I’m reading 1Q84 by Haruki Murkami. I love his surreal style! He builds up slowly but never gets boring. He is my favorite writer.

For board games, I prefer card games actually. We play Klaverjassen often in training camps. Since we are in quarantine, my husband and I play tennis every day. He’s happy since he hasn’t lost a game yet.

*Editor’s note: Heemskerk has a very interesting story of marrying her now-husband off-schedule. Look for details in our next Beyond the Lane Lines post.

Both ‘Brooklyn 99’ and ‘Family Guy’ are easy to binge-watch and are funny. And I don’t read books – hard for me to sit still and concentrate on them..ha!

I’m currently reading the sixth book of ‘The Seven Sisters’ by Lucinda Rily at the moment. I’m also binge-watching a pretty cool series called ‘Outlander’. My favorite board game is Catan, but with only 2 people we’ve been playing Lost Cities and several card games.

The last book I read was ‘Breaking the Habit of Being Yourself’. It’s about overcoming mental paradigms, creating your own reality through the shaping of your own mind. ‘Leo’ is another book I read recently which tells the story of Leo from the moment he’s initiated in sports all the way until he becomes a big name and beyond.

I’m not a big Netflix guy, but I do love movies. 90’s psychological thrillers such as ‘Fight Club’ and ‘The Shining’ are all-time favorites.

I recently finished watching ‘Love is Blind.’ I love reading anything from sportspeople. I love hearing about the stories that you don’t see on TV.

I love the Logo Game.

I’m currently watching the Netflix series ‘Drive to Survive’ about Formula 1. I’ve followed the sport for a long time and I love to see all the behind-the-scenes action. Especially as a racer myself, I can understand a lot of the pressures that the drivers go through and love to see how they cope with them. I like to see all the unique characters that are across the grid and spire to bring character into my own sport as well.

While the world of sport is very high-intensity and high-pressure, it’s also entertainment and that’s what people love to see.

Currently, I’m also reading Stephen Hawking’s book ‘Brief Answers to the Big Questions.’ I take A-level physics and understand a lot of what he talks about since I find I have a very inquisitive mind and always want to know the reasons why.

I like classics, such as Jules Verne’s ‘Twenty Thousand Leagues Under the Sea.’ I never watched ‘Game of Thrones’, but I’ve read the entire series.

I love books that get me thinking and really hold my attention, such as ‘This Is Going To Hurt’ by Adam Kay and ‘Between You And Me’ by Lisa Hall. The most frustrating book I’ve read was ‘Gone Girl’ – great book until the ending; never wanted to throw a book out the window more in my life!

I do Game Nights with a group of friends and we play Cards Against Humanity, Exploding Kittens, the Game of Life and the Stick Game.

I watched ‘Prison Break’ for the very first time last year and I didn’t really want to, but my girlfriend wanted to see it. We tried and after 2 episodes were literally stuck to the TV. It is intense and things can go wrong, but that’s what I like the most about it. I don’t like to watch TV shows knowing it will be a happy ending and this one really kept the suspense about it.

For games, Monopoly is my favorite, but it can be the best 3 hours of your day or the worst!

Books: ‘Tools of the Titans: Learn From the Best’ by Timothy Ferris (Kromo); ’12 Rules For Life: Very Useful Tools to Get a Grip on Chaos’ by Jordan Peterson (Ferry)

Film: ‘The Two Popes’, ‘The Professor and the Madman’ – both very touching and nice filmwork (Kromo & Ferry)

The Japanese anime ‘My Hero Academia’ is really cool, but it’s much more than just a show. It’s also motivation to give everything you’ve got and become better.

My 2 favorite shows are ‘New Girl’ and ‘Brooklyn 99’. I just love that type of humor. It always cheers me up and I can rewatch both shows without hesitation.

The best card game is definitely Wizard. It’s really fun to play with your friends and it’s not based on luck; you have to use your brain to win!

SwimSwam has reached out to Pieroni for rebuttal.

Board Game: Scrabble
Shows: Sons of Anarchy & Suits; lots of episodes to get stuck into

I don’t watch much TV, but when I have free time I love to watch action series like ‘Money Heist’, ‘Narcos’ or some series about an investigation.

I’m addicted to my training bike. Right now I can’t go outside, but I have my trainer at home so I can plug my system online and I can ride online with some friends around the world on Zwift.

I enjoy watching ‘Race Across the World’ on BBC because I love the race aspect of the program, along with seeing some incredible places in the world which, hopefully, I will have the chance to travel to.

I don’t particularly read books, however, I like having cookbooks to help prepare good dishes.

Monopoly is my favorite board game. It’s always so competitive and brings the best out of people (including family arguments).

I’ve been spending most of my time making vlogs, FaceTiming with my girlfriend while she’s stuck in Houston and playing a bit of Fortnite in my free time. I also play FIFA with my dad. And, we’ve been planing a lot of table tennis!

My favorite TV show has always been ‘Friends’. I think it’s an all-time classic. But, right now I am hooked on a show called ‘Better Call Saul.’

At the moment I’m reading a very famous one called ‘Zorba the Greek’ by Nikos Kazantakis. It’s a controversial book, which addresses many philosophical issues. For example, the meaning of life, presenting them through the life of a boisterous and mysterious Greek man.

I like the show ‘The Mentalist’ because the main character knows how to read people’s gestures. I love playing Uno as a game just because it’s easy to play and always turns out fun.

My favorite TV show is ‘Another Skye’. It is a talk program that visits the guest’s memories and their home town, looking at the guest’s past. I like it because I can learn a different way of life from them.

Othello is the game I like. It’s the best way to kill time with your friends.

Rewatching ‘How I Met Your Mother’ for the third time because it’s the only show people should watch.’

I steer more towards the gritty dramas like ‘The Killing’, ‘Broadchurch’ and ‘Dark.’ But, I am currently watching ‘Better Call Saul’, which is more of a dramedy.

Catan is my favorite board game and, as far as reading goes, I much prefer news over novels (imagine that!)

“SwimSwam has reached out to Pieroni for rebuttal”. Classic !

They should tell Guy and Andrew to play each other

and livestream it on twitch!

Aaah Retta thank you for reminding me of Broadchurch! That’s the rest of my isolation binge watching sorted out

I sorta cringed at Kromo reading Tim Ferris, but really lost it at Weertman reading Jordan Peterson. Not exactly a guy I want to read for life advice, given his current situation.