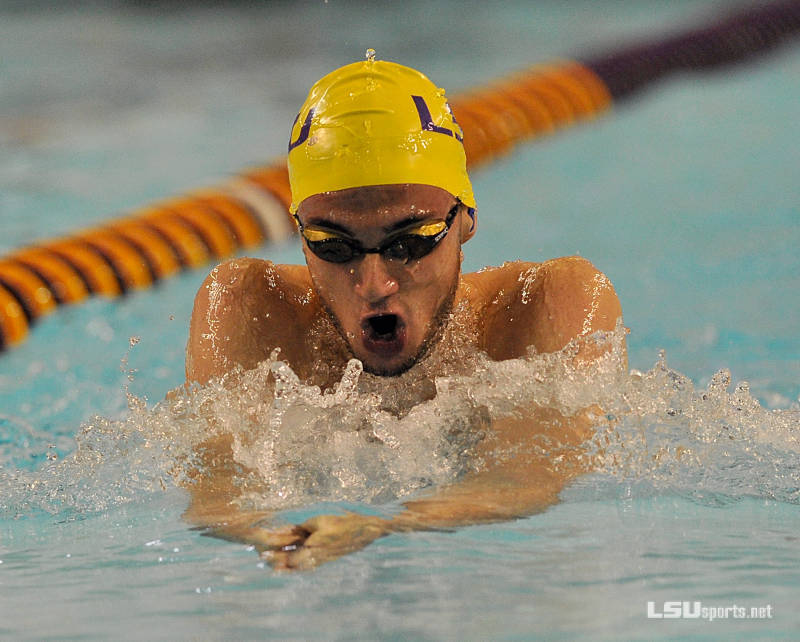 LSU kicked off the season with its annual Purple vs Gold Intrasquad meet. Stock photo via Steve Franz/LSUsports.net

The purple team beat the gold team to win the annual LSU Intrasquad Meet. Sophomores Matt Klotz and Lewis Clough, and freshman Cameron Karkoska, led the purple team to victory with 2 wins each. Klotz, the deaf world record holder in the 50 meter back, was on the winning mixed 200 medley relay and won the mixed 200 back in a solid first-meet performance of 1:49.88. Clough was also on the winning 200 medley relay and won the mixed 100 fly with a time of 49.46, just 1.01 seconds of his personal best set last year. Karkoska picked up wins in the mixed 800 free relay and the mixed 200 IM. Other event winners from the purple team were Jake Markham, Ellie Baldwin, Lauren Thompson, Olivia Paskulin, Leyre Casarin, Matt Phillip, and Tyler Harper.

LSU welcomes 20 freshmen to the team this year, and the coaching staff was excited to see how the team looks at the beginning of the season with so many new members. Head Coach Dave Geyer said he was interested in watching the freshmen to “see how they compete.”, and that “it’s a long season, and this was the first step in the process.”

LSU will face Loyola and Tulane on Friday, September 29th, at 6 p.m. at the LSU Natatorium.