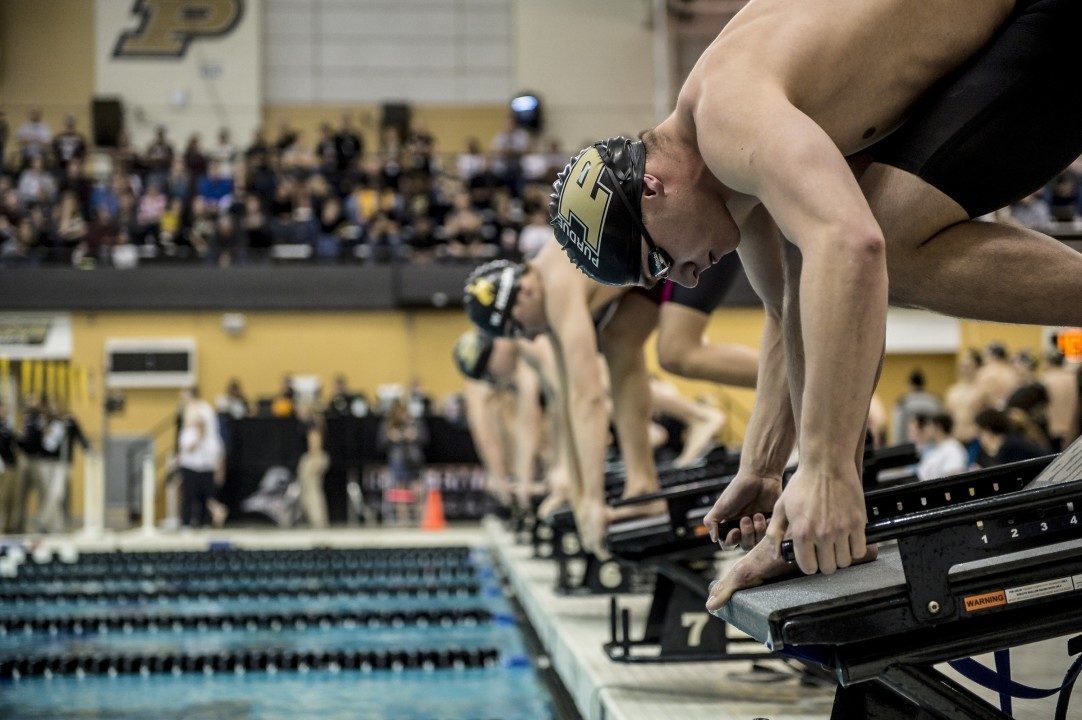 Both the men’s and women’s teams for Purdue rolled past Miami (Ohio) in their season-opener. The Boilermaker men were especially dominant, winning 15 of 16 events, while the women won 11. The Purdue men won the meet 201.5 to 93.5, and the women won 174 to 124.

The Purdue men swept the podium in the 100 free, 500 free and 200 breast, and also finished first and second in both relays.

Miami Ohio’s lone individual event win on the men’s side came in the 200 free when Lucas Brock held off Purdue freshman Kaleb Gould to win by five one-hundredths of a second. Brock’s winning time was 1:43.50.

WEST LAFAYETTE, Ind. — Kaersten Meitz, Nick McDowell and Eddy Zawatski all won a pair of events to lead the way as the Purdue swimming & diving teams posted an opening-night sweep of Miami (Ohio) in dual meet action at the Boilermaker Aquatic Center on Friday.

Meitz opened her junior season with a sweep of the women’s distance freestyle events (500 and 1,000). McDowell did likewise on the men’s side in his collegiate debut. Zawatski touched first in the men’s freestyle sprints (50 and 100).

Breanna Robinson won the 100 butterfly and contributed to each of the women’s relay winners. For the men, Erik Juliusson (100 fly) and Joe Young (200 fly) coupled an individual event victory and relay win together.

Olympians Steele Johnson (1-meter diving) and Jinq En Phee (100 breast) were victorious in an event in their first college meets of the year. The Purdue men had the top four finishers in both diving events, but it was freshman Brandon Loschiavo that was victorious on 3-meter.

The Purdue women had at least the top three finishers in the 50 free, both butterfly events and the 200 individual medley. Along with diving, the Purdue men did the same in the 100 and 500 free. But the men had one-two finishes in 11 events total, including both relays.

Chris Bals, Grace Hernandez, Taite Kitchel and Jackie Smailis all won an individual event and finished as the runner-up in another. Bals was victorious in the 200 breaststroke after finishing second to Marat Amaltdinov in the 100. Hernandez touched first in the 100 free after finishing as the runner-up in the 200. Kitchel was the women’s top performer in the butterfly events, winning the 200. And Smailis paired a victory in the 50 free with a runner-up showing in the 100 backstroke.

Other individual event winners for the men included Kiki Komlenic (100 back), Adam Noens (200 IM) and Jake Thomas (200 back). Hanna House (200 back) and Emmy Rawson (200 IM) also won events for the women. Coincidentally, both genders saw a student-athlete record a pair of second-place finishes in the diving events and freestyle sprints. Danielle Auckley (sprints) andSamm Reese (diving) did so for the women, Joe Cifelli (diving) and Nate Thomas (sprints) for the men.

The Boilermakers close out their season-opening weekend Saturday when they host the nine-university Indiana Intercollegiates meet. Action begins at noon at the Boilermaker Aquatic Center.

James Wray had an impressive meet against the Boilermakers, earning second place in both the 100-yard backstroke (50.68) and 200-yard backstroke (1:53.06). He also led the 200-yard medley relay team to a third-place finish (1:34.546), teaming up with Nicholas Wukovits, Rob Newman and Nick Ward.

Other top-three finishes by RedHawk men included Justin Andrews placing second in the 1000-yard freestyle (9:43.46), Ross Rybakowicz touching the wall third in the 200-yard butterfly (1:57.17) and Wukovits with a third-place finish in the 100-yard breaststroke (57.17). Newman swam a tight race, tying for second with a Purdue swimmer, with a time of 51.44.

The Miami men and women have a quick turnaround, as they are back at home on Saturday afternoon at 1 p.m. to take on Xavier.