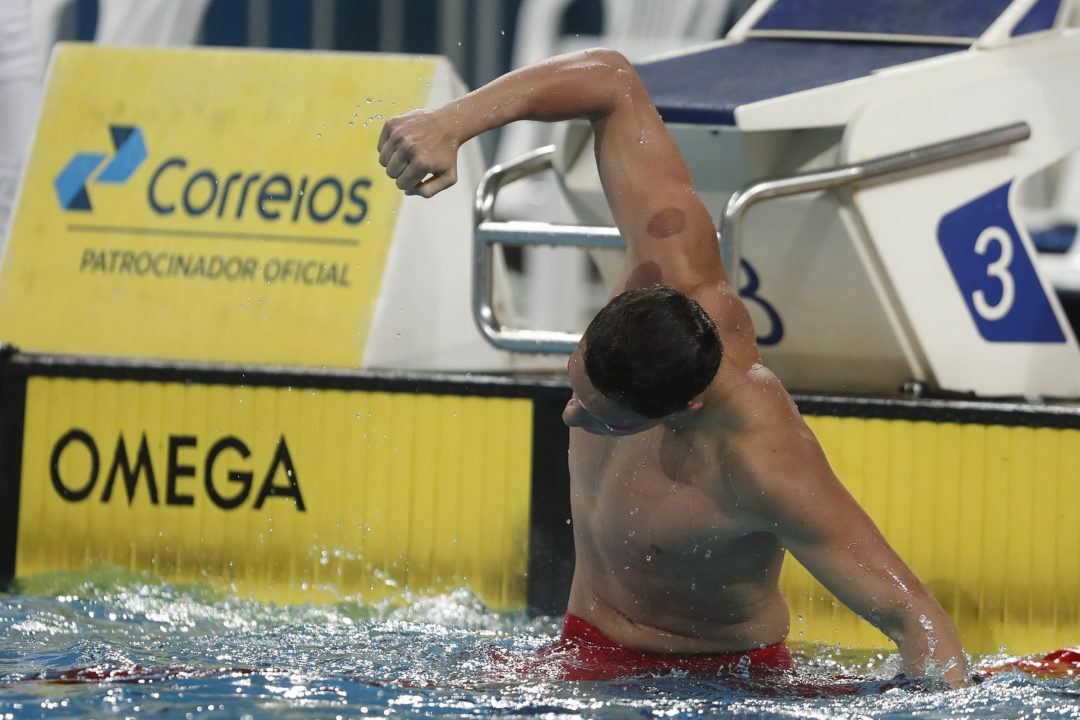 This event went to the Florida freshmen on the men’s and women’s sides.

Leah Braswell wasn’t far off of the 4:40 barrier, clocking a 4:40.86 to lead the way. The freshman has been 4:39 before, and she stayed strong with mostly 28-lows the way through and a 26.80 finishing 50. Auburn freshman Emily Hetzer was 2nd in 4:43.09, less than a second off of her lifetime best, while Auburn senior Erin Falconer was 3rd in 4:44.29. Alabama freshman Kensey McMahon is already seeing a lot of improvement with ‘Bama, hitting a 4:45.24 to take 8 seconds off of her lifetime best (which was a dual meet swim from earlier this season).

The 200 IM is an event right in the Florida men’s wheelhouse, but Georgia Tech’s Caio Pumputis absolutely stole their thunder this morning. The sophomore was 1:43.70, the only finisher under 1:45, with a time that will likely qualify for NCAAs. That’s a best time by over a second, with his old best coming just last week at 1:44.83 at the ACC/B1G Challenge. Florida took the next two spots, with junior Grant Sanders (1:45.31) and freshman Kieran Smith (1:45.52). Virginia Tech’s Sam Tornqvist was next at 1:46.48.

Claire Fisch has been on fire this semester following her transfer from Arizona State to Auburn, and she’s carrying that momentum into this meet. Fisch, a junior with the Tigers, was 22.15 to finish over three tenths ahead of the next-best competitor. That’s a best by .12 for Fisch, who is now flirting with the 22.0 barrier. 2nd this morning was UNC freshman Grace Countie at 22.50, with ‘Bama frosh Kalia Antoniou (22.54) and South Carolina’s Christina Lappin (22.57) not far behind.

Alabama took the top two spots in the men’s 50 free, with Robert Howard at 19.41 and Zane Waddell at 19.45, while FSU senior Will Pisani clocked a 19.46 as he’s well within striking distance to edge in for a win tonight. Florida’s top finisher was Maxime Rooney at 19.77, which looks to be his first time under 20.0 (his old best, according to USA Swimming, is a 20.08 from the 2017 Purdue Invite last season).

How are the ASU transfers from IU doing? I forgot their names.

I’m not sure where you’re reading that I wrote Pumputis stole the show on the national stage. In fact, I was putting his swim in context of the competition at this meet, which includes Florida, a team traditionally dominant in the IM’s.

Looking around at other invite meets, though, we haven’t seen anything faster than 1:43 yet. I bet someone at the IU Invite will be able to get under tonight.

And yes we did see a 1:42 last weekend at the ACC v B1G meet from an ACC swimmer.

Who said he/they were best? You can swim well and not be the best