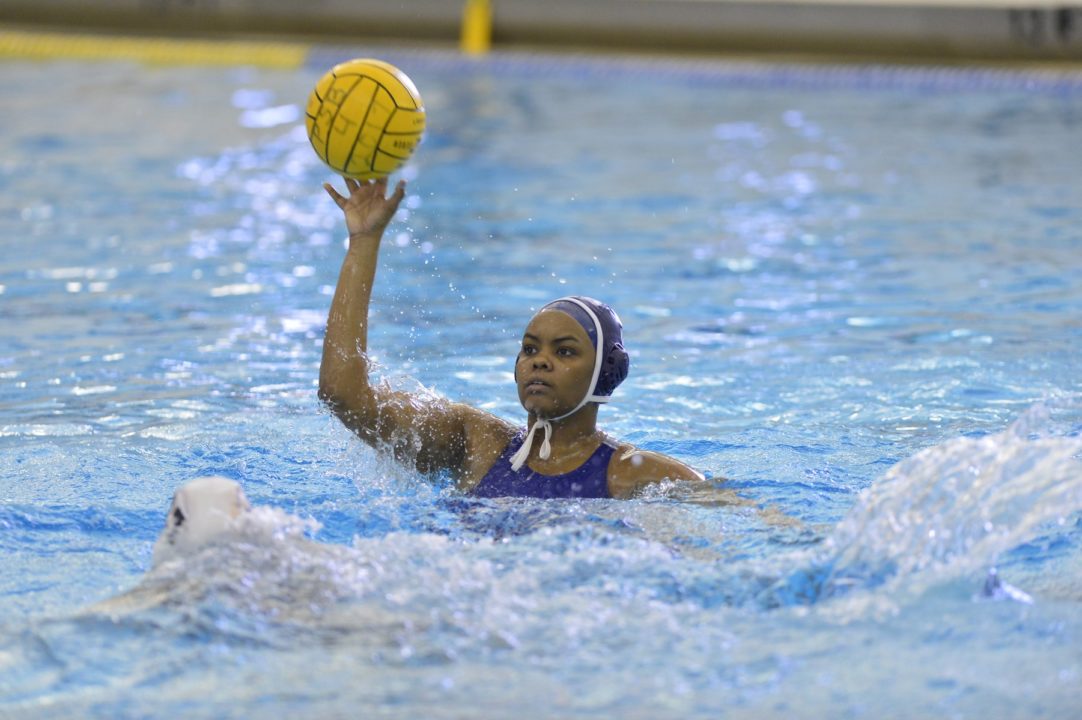 Penn State Behrend’s Lauren Wood set the school season record for goals with two against Connecticut College on Friday, upping her tally to 55 for the year. Kyra Christmas was the leading individual goal scorer of the week, putting in eight goals on 12 shots as #6 Pacific topped #13 Fresno State 16-8. Current photo via Penn State Behrend Athletics

In Penn State Behrend’s game against Connecticut College on Friday,  semopr Lauren Wood set the school season record for goals with two against Connecticut College on Friday. This brings her to 55 for the year, after earlier this month surpassing the school’s career record. She then added hat tricks in the 12-6 win over Utica later in the day and the 14-10 victory over Washington & Jefferson on Saturday, before closing out the weekend with six scores in a 14-12 loss to Grove City.

Kyra Christmas was the leading individual goal scorer of the week, putting in eight goals on 12 shots as #6 Pacific topped #13 Fresno State 16-8. Viktoria Szmodics notched a hat trick for the Tigers in the contest.

LaSalle’s Sarah Defuso put in six of the team’s 11 goals in an 11-10 win over Siena on Saturday. Defuso added five scores as the Explorers bested Villanova 14-13 on Sunday. Madison Martinez turned in a hat trick in the Sunday victory.

#15 Wagner got six goals from Daisy Nankervis and five from Jacqui Sjogren in a 19-6 victory over VMI on Saturday. Erica Hardy also had a hat trick in the game. Sjogren and Sofia Diaz Alvarez notched five goals each, while Nankervis and Kristen Sacyznski added four apiece in the Seahawks’ 26-4 win over LaSalle later in the day. Savannah Henshaw put in a hat trick among nine scorers in the game.

On Sunday, Sjogren notched five scores in the Seahawks’ 21-8 win over Siena, leading nine scorers, followed by Kristy Donkin and Nankervis, who put in three goals apiece. Sjogren, a junior attacker from Queensland, Australia, finished the week with a six-goal effort in a 26-5 win over Villanova. Diaz Alvarez and Hardy added four goals each, while Donkin and Nankervis turned in hat tricks. Ten Wagner players scored in the final victory.

Villanova got six goals from Kate Stenmoen in a 14-13 loss to LaSalle on Sunday. The Wildcats saw Kaysie Stuba score three times in an 11-8 loss to #20 Marist on Saturday.

Monica Chernoff scored five times and Claudia Oppermann and Lori Berberian chipped in four goals each as Occidental outdid Cal Tech 17-6 on Wednesday. Occidental got a hat trick from Chernoff in the team’s 16-5 loss to LaVerne on Saturday.

#2 Stanford was led by Madison Berggren’s five bagger and Aria Fischer’s four scores in a 20-7 win over #18 Harvard. Ten different Cardinal players scored in the match, with five chipping in multi-goal efforts.

Maxine Schaap put in five goals to lead #5 Hawaii past #21 Cal State Northridge 15-2 on Saturday. Schaap had help from Femke Aan and Carmen Baringo who each notched hat tricks.

Teresa Marchetti notched five goals and Sawyer Bellville added a hat trick as Whittier moved past Chapman 18-10 on Wednesday. Veronica Ramirez put in three goals in the team’s 10-5 win over Redlands on Saturday.

Jordan Van Reeken and Jillian Schultz each scored five times among eight scorers as Iona topped St. Francis Brooklyn 17-13 on Saturday. Schultz chipped in a hat trick in the Gaels’ 11-8 win over VMI on Sunday.

St. Francis Brooklyn got six goals from Kelsey Snelgar in an 11-10 win over Siena on Saturday. Snelgar put in five goals in a 17-13 loss to Iona earlier in the day, while Sara Monckton and Nicole Herrick posted hat tricks in the contest. Bianca Gonzalez turned in a three-goal day in a 13-8 loss #20 Marist on Sunday.

#20 Marist saw Anais Mathes put in five goals and Myriam Lizotte add a hat trick in a 15-8 win over Siena on Sunday. The Red Foxes built on a four-goal effort by Ariana Singer in a 11-8 win over Villanova on Saturday. Katherine Tijerina put in four goals in the team’s 13-8 win over St. Francis Brooklyn on Sunday, while Singer added a hat trick.

#12 Loyola Marymount got four goals from Mariaelena Seltopoulou and a hat trick from Mollie Williams in its 11-8 win over #22 Azusa Pacific on Saturday. APU’s Hannah Bradley notched four scores in the loss.

Daphne Guevremont scored four goals as #13 Fresno State lost to #7 Pacific 16-8 on Saturday. Emily Nicholson, Claire Schade and Guevremont turned in hat tricks for the Bulldogs in a 13-12 overtime loss to #18 Harvard on Tuesday.

Amy Castellano scored four goals as #17 Princeton squeaked past Concordia (CA) 8-7 on Wednesday. Madison Ravello notched a hat trick for the Eagles in the loss.

Evan Tingler put in four goals, including the game winner in the second overtime period, to lift #18 Harvard past #13 Fresno State 13-12 on Tuesday. Kristen Hong led the Crimson with a hat trick in a 10-7 win over #19 San Jose State on Thursday.

McKenna Miller put in four goals as RV Brown topped Whittier 11-7 on Sunday. The Bears got three goals each from Dagmara Czajka and Maigrie McDougal amongst five multi-goal efforts in a 14-9 victory over Claremont-Mudd-Scripps later in the day.

Siena’s Sophia Torres scored four and Diana Fernandez added a hat trick in the Saints’ 11-10 loss to LaSalle on Saturday. Anna Borton and Bianca Prinsloo notched three goals apiece in the team’s 11-10 loss to St. Francis Brooklyn later in the day.  Torres and Kristen Burger put in hat tricks in Siena’s 21-8 loss to #15 Wagner on Sunday. Torres added three more scores in the team’s weekend finale, a 15-8 loss to #20 Marist.

Nine players contributed goals led by Paige Gurich’s four scores in Chapman’s 21-10 win over Cal Tech on Saturday. Audrey Hattori, Alyssa Caltagirone and Charlene Ma each put in three goals in the victory. Chapman got four goals from Argelia Diaz in an 18-10 loss to Whittier on Wednesday, while Hattori scored three goals in a 7-6 win over Macalester on Tuesday.

Emily Bennett scored three goals for RV San Diego State in the team’s 8-6 loss to #14 Princeton on Tuesday. Bennett also added a hat trick as the Aztecs upset #12 Loyola Marymount 9-7 on Friday. Hannah Carrillo chipped in three scores in a 10-6 win over #22 Cal Baptist on Saturday.

Sonoma State got hat tricks from JoJo Williams and Annika Erickson in an 11-8 win over Cal State Monterey Bay on Saturday.

VMI’s Sarah Dolitsky turned in three goals in the team’s 8-7 win over Villanova on Saturday.

Player of the Week: Eirini Patras, Long Beach State – Racked up 16 saves in an 8-2 win over #14 Princeton, tied for third most in a single match in school history

Defensive Player of the Week: Lauren Burns, Brown – Posted 24 saves with a .750 save percentage as the Bears topped Chapman (8-3) and Whittier (11-7); allowed just one goal and made 10 stops against Chapman; registered 14 saves while allowing seven goals against Whittier; tallied three assists on the week

Co-Player of the Week:

Offensive Player of the Week: Jacqui Sjogren, Wagner – Scored 20 goals in four wins for the Seahawks; notched five goals in each game, while also added three assists; drew 12 exclusions and grabbed nine steals; posted an .815 shooting percentage on the week

Defensive Player of the Week: Isabel French, VMI – Made 38 saves across three matches for a 54.3% save percentage; tacked on four steals as the Keydets went 1-2.

Player of the Week: Aria Fischer, Stanford – Scored four goals as the Cardinal topped #18 Harvard 20-7 in the team’s lone effort of the week; added a team-best three assists, two steals and a field block; earned three exclusions in the win

Newcomer of the Week: Tina Doherty, Indiana – Scored four goals and added an assist as the Hoosiers fell to #6 Michigan 16-8 on Saturday; grabbed two steals and added a field block on the defensive end

Offensive Player of the Week: Teresa Marchetti, Whittier – Put in eight games over three games last week, including five in an 18-10 win over Chapman; added two scores in a 10-5 win over the Redlands; scored one goal in an 11-6 loss to Brown

Player of the Week: Brooke Sullivan, Sonoma State – notched a season-high 16 saves in an 11-8 conference win over Cal State Monterey Bay on Saturday.