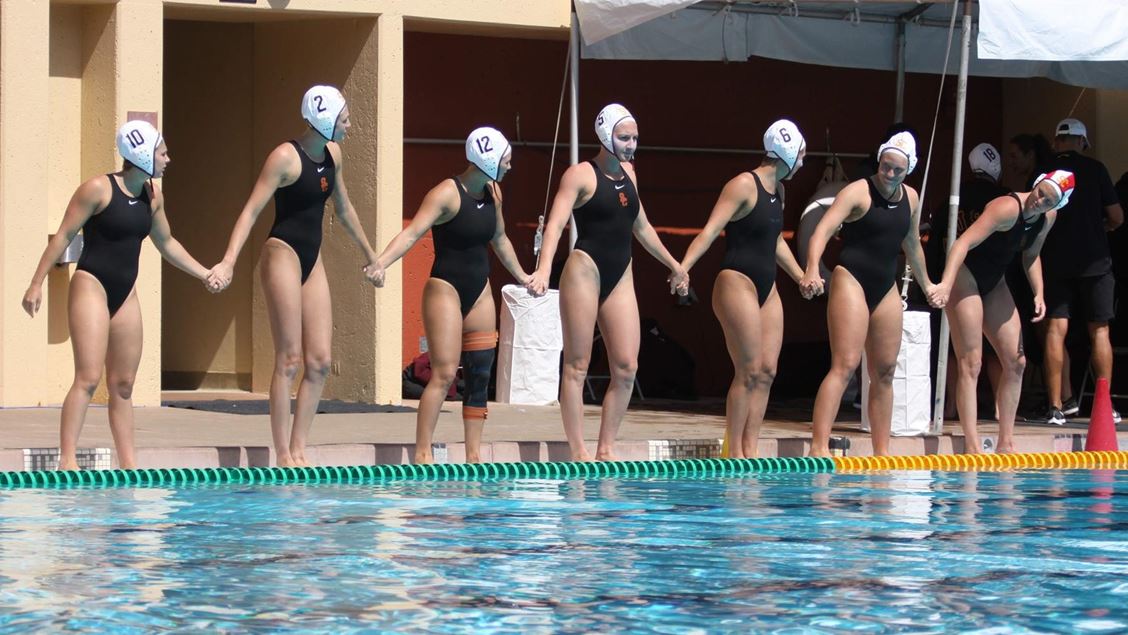 NCAA Tournament water polo action continues Friday at the Avery Aquatic Center with the quarterfinal round (first round) with the top four seeds  – #1 USC, #2 Stanford, #3 UCLA and #4 Cal beginning play alongside #5 Hawaii, #6 Michigan and Tuesday’s opening round victors: #8 Pacific and #14 UC San Diego.

Defending national champion USC will kick things off against the Tritons, while 2018 runnerup and tournament host school Stanford will take on Pacific. The Trojans are looking to go back-to-back and nab its sixth NCAA water polo crown, while Stanford is aiming to win its seventh NCAA title and second in its home pool (following 2015).

The first step toward USC (26-1, 5-1 MPSF) going back-to-back as national champions goes through #14 UC San Diego, which topped #19 Wagner in the opening round (or play-in game). The Trojans have finished no worse than fourth (or in the semifinals) in every NCAA Tournament since 2004, including five national titles. USC is on a six-match win streak, including a golden goal victory over #1 Stanford in the MPSF title game, which avenged its lone loss of the season.

UC San Diego (22-13, 4-0 WWPA) is on to the first round (quarterfinals) for the first time since 2016, after defeating Wagner 12-8 in Tuesday’s opening round. The WWPA’s tournament champion for the seventh straight year, the Tritons bring a six-game win streak into Friday’s battle.

Series History: USC leads the all-time series 13-4, including a 13-4 win on Jan. 20 at the Gaucho Invitational. The Trojans have won 13 straight against the Tritons.

Players to Watch: First team All-MPSF honoree Maud Megens paces the Trojans with 63 goals, including 20 multi-goal efforts, while fellow first teamer Paige Hauschild has chipped in 45 scores, including 14 multi-goal performances. On the other end of the pool, first teamer Amanda Longan has allowed just 4.4 goals per game.

Three players boast more than 50 goals, led by Honorable Mention All-WWPA honoree Grace Pevehouse’s 61. Honorable Mention selection Taylor Onstott (55) and first teamer Ciara Franke (53) follow. It was Shelby Stender, however, who guided the Tritons against Wagner, with four scores, upping her season tally to 33 goals. Pevehouse added two goals, while Franke and Onstott chipped in one apiece among six scorers in the victory.

First Team All-WWPA selection Bennett Bugelli handled the goalkeeping duties in the game, but did not make a save, leaving her with a 7.19 goals against average. If necessary, the Tritons have the option of switching to Reilly Gallagher, who has logged 494 minutes between the pipes and owns a 7.57 GAA.

Pick: USC. Even after a nearly two-week layoff, it is hard to pick against the defending champs and especially the goalkeeping abilities of Longan. If UCSD hopes to keep this one close, they will have to go deep in their scoring roster, utilizing Stender, WWPA Player of the Year Chanel Schilling (35) and others to load up on the Trojan defense. UCSD has played 20 matches against ranked foes, but fell to all eight of the Top 10 opponents they faced. It would take a monumental effort to pull off this upset.

Despite being the third at-large team to get in to the NCAA Tournament, Cal was awarded the #4 overall seed. The #4 Bears (16-8, 3-3 MPSF), which earned their third straight NCAA berth after finishing fourth in the MPSF, are looking to make the semifinals for the seventh time in program history, doing so in each of its previous appearances. All eight of Cal’s loss this season have come to Top 5 opponents, while the team also registered seven Top 10 victories.

Hawaii (18-5, 4-1 Big West) is making its sixth NCAA appearance in program history and first since 2015. Although the team is 5-10 all-time at the NCAAs, the Rainbow Wahine have won four of their five opening contests. After finishing in a tie for the regular season Big West title with UC Irvine, the Rainbow Wahine charged through the conference tournament with wins over UC Davis and UC Irvine to claim the league’s automatic bid. Four of the team’s five losses came to Top 5 foes, including two against Cal (12-10 on Feb. 23; 10-9 on March 10).

Series History: Cal leads the all-time series vs. Hawaii 33-11, including a 2-1 advantage in 2019. The Rainbow Wahine won the most recent contest on March 29, marking their first win over the Bears since 2016.

Key Players: First team All-MPSF selection Emma Wright has more than doubled the output of her nearest Cal teammate, finding the back of the net 62 times, including a seven-goal effort against San Jose State in the MPSF Tournament among 11 hat tricks on the year. Brigit Mulder (36) and Kitty Lynn Joustra (30) follow. In goal, second team All-MPSF honoree Madison Tagg boasts a 7.23 goals against average, playing in 22 of the team’s 24 games.

Pick: Flip a coin. Hawaii won the most recent meeting by just one goal, but that could go a long way in confidence for the Rainbow Wahine. Honestly, this one comes down to star power and defense. Will it be Emma Wright for Cal or Hawaii’s Irene Gonzalez that can impose her will offensively or get enough help from a supporting cast to gain the edge? Forced to pick, I give Hawaii the edge based on momentum.

#8 Pacific (18-8, 7-0 GCC) steamrolled Cal Lutheran 16-4 in the opening round of the NCAA Tournament on Tuesday. The victory, which extended the Tigers’ current win streak to 10 games, saw eight players contribute a goal. Leading the way was GCC Player of the Year Kyra Christmas’ five-goal haul, which marked her 12th straight hat trick. Toula Falvey (15) chipped in three goals. In 2019, GCC champion Pacific bested 12 ranked foes, including potential semifinal opponent Michigan once, and suffered all eight of its losses at the hands of Top 10 foes, including a 14-3 decision to Stanford on Feb. 23.

#2 Stanford (20-2), which boasted the #1 spot nationally to end the regular season and captured the MPSF regular season crown, is coming off a 9-8 golden goal loss to USC in the league’s tournament title match. The Cardinal are no stranger to the NCAA Tournament, however, boasting six titles, including five of the last eight. Stanford, which has played in the national final every year since 2010, has suffered both of its 2019 losses at the hands of the Trojans, which also topped team in the 2018 NCAA title game. This year, 19 of the team’s 20 wins have come against ranked teams, including 11 against the Top 10, strong preparation for whatever lies ahead over the next few days.

Series Record: 1-0 Stanford in 2019 with the Cardinal coming out with a 14-3 win on Feb. 23 at the Barbara Kalbus Invitational

Key Players: Kyra Christmas paces Pacific with 69 goals, followed by First Team All-GCC honoree Viktoria Szmodics (44) and second teamer Mariana Duarte (44). As evidenced by the team’s opening round win, however, the Tigers boast multiple goal scoring options, with eight notching a goal and four recording multiple scores. Honorable Mention All-GCC selection Clara Vulpisi has spent 780 minutes at goal keeper, boasting a 7.53 goals against average. In 18 of her 26 appearances, Vulpisi has made at least five saves, while posting a 13-5 mark in those contests.

The Stanford roster is headlined by Makenzie Fischer and Aria Fischer, who have led the team in scoring in all but six matches in 2019. Makenzie, the reigning MPSF Player of the Year, boasts 78 goals, including 17 multi-goal efforts and 15 hat tricks. Aria, a first team All-MPSF honoree, has chipped in 46 goals, followed by second teamer Kat Klass (41). Fourteen players have contributed to the team’s 354 goal tally (16.09 goals per game) with 13 notching at least one multi-score effort. The Cardinal turn predominantly to honorable mention All-MPSF honoree Emalia Eichelerger in the goal, where she has posted a 7.40 goals against average over 54 quarters of play. Thea Walsh is a strong second option, with a 5.08 GAA in 32 quarters of play.

Pick: Stanford. This one could be closer than expected if battle tested Pacific can utilize multiple scorers, but if the Tigers rely predominantly on Christmas to do the scoring, it may be over much sooner. The Cardinal have something to prove after last year’s title game disappointment and will seemingly do anything to get another crack at USC. Even in a fairly even contest, Stanford has the edge with a tougher defense (6.5 GAA), a dynamic duo with the last name Fischer and home pool advantage (10-1 at home in 2019 and 108-10 since 2008). Don’t expect Pacific to roll over though, no matter the score.

#3 UCLA (23-6, 4-2 MPSF), which was one of three MPSF teams to earn an at-large berth to the NCAAs, finished third in the both the conference regular season and tournament races. The Bruins record all 23 of their victories against Top 25 teams, including 11 Top 10 victories, besting its current foe twice (15-5 on Feb. 23 and 9-7 on Jan. 20). The teams six losses all came against MPSF teams, three vs. USC, two vs. potential semifinal foe Stanford and one vs. Cal.

#6 Michigan (23-8, 6-0 CWPA), which is making its fourth straight NCAA Tournament appearance and looking for its first NCAA win since 2016, brings a nine-game win streak into Friday’s contest against UCLA. The Wolverines, which won the CWPA regular season and tournament titles, are no stranger to tough competition, having notched 19 wins vs. ranked foes and six against fellow Top 10 teams. Michigan has hit a buzzsaw in MPSF foes, however, falling to #3 UCLA and #1 USC twice and once each to #2 Stanford and #4 Cal.

Key Players: MPSF first team honoree Maddie Musselman leads the Bruins with 50 goals, followed by Val Ayala (32) and second team All-MPSF selection Bronte Halligan (27).  UCLA has scored 10.24 goals per game, while allowing just 6.72. Seventeen players have turned in multi-goal efforts, including three five-score performances by Musselman. Honorable mention All-MPSF honoree Carlee Kapana has played 530 of the team’s 716 minutes in the goal, posting a 6.64 goals against average. Jahmea Bent has logged 249 minutes between the pipes and a 6.62 goals against average.

The Wolverines average 11.4 goals per game with six players boasting 30 or more goals, while allowing just 7.58. Second team All-CWPA honoree Julia Sellers has netted a team-best 63 goals, followed by CWPA Rookie of the Year Abby Andrews (56) and CWPA Player of the Year Maddy Steere (53). First Team All-CWPA selection Heidi Ritner has played 862 of the team’s 988 minutes in goal. She boasts a .495 save percentage and a 7.52 goals against average. Ritner is just one save away from her third straight 200-save season.

Pick: Michigan. History says this should go to UCLA, but it is difficult to beat a team three times in a year. The Wolverines may be due to garner their first ever win over the Bruins. Michigan is on a roll coming into the tournament and this senior class is aiming to garner its first win on the NCAA stage. Being the underdog may also play into the Wolverines’ favor. Statistically, this one should be close. If UCLA wins, it likely will be Kapana’s efforts in goal that are the difference, shutting down a varied Michigan attack.