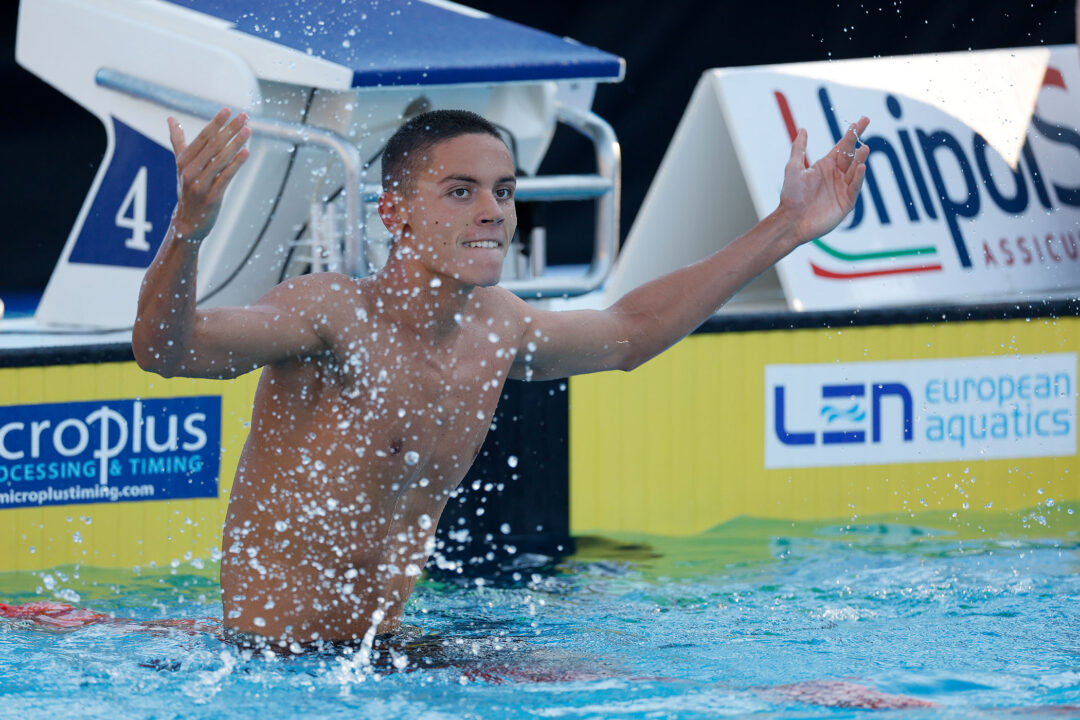 After Popovici lead the Romanian 4×100 free relay off in 47.07 last night, it seemed as though he could put up a performance close to what he did at the European Championships a few weeks ago. However, he was over 3 seconds off that time tonight. It will be interesting to see how Popovici fares in the individual 100 free later in the meet.

Although his time was well-off from the world-leading time of 1:42.97 he set at the European Championships in July, Popovici described the race in his post-race interview as: “It was a good enough race, I’m happy with it. It’s all good.” He also credits the crowd for helping him “have fun”, as that was a stated goal of his for this this meet.

Popovici and Girev’s splits are very similar, but Popovici got the edge on Girev’s record from his opening speed in the first 50. This is Popovici’s second championship record of the week, with his first being his lead-off in the 4×100 relay last night (47.07).

Behind Popovici, there was a tight race for silver and bronze between Hungary’s Daniel Meszaros and Italy’s Filippo Bertoni. Meszaros managed to hold of Bertoni and Vitor Sega to claim silver, but Bertoni had the second-fastest final 50 split behind Popovici.

Not talking about the phenom this time, but about Filippo Bertoni who eneded up third last night.
Kid may not have the most pleasant swim in the field, but he was the youngest among the top 8 the only one with 2006 as DOB against guys being born in 2004. He went 1:49.0 dropping 6 tenths form his previous PB set one month ago. I keep saying Italy probably have a super interesting 4×200 for the upcoming Olympic cycle after Paris. There’s only a problem, but a very big one: if Paris scheduled will be confirmed in 2028, 4×200 will be just minutes later men’s 800 free, with Lorenzo Galossi being a strong medal contender and with his efforts… Read more »

Sounds like he’s tired. I had been wondering how he’s been able to maintain such so many peak level performances over this period of time. That’s highly unusual for any athlete.

Nice of David to be kind on the competition.

Crazy to look at his time and think “oh man that’s a rough swim”. But then consider that it’s still the fastest anyone has swam at world junior champs. Without the context of his other performances this would be an impressive showing for an athlete. Crazy how much ahead of the curve he is.

Just because the word “WORLD” is in the name of this meet it doesn’t make it more significant. It IS slow. Swimming for Popovichi by more than 3sec at 200m distance behind his personal best IS slow. Most likely there is some reasoning for racing this way. But please look at the things as they are. Yes, he is well ahead of swimmers of his age and that raises a great deal of expectations because statistically it is very unusual for male swimmer to peak at the age of 17. So even greater results are expected from him. But it is even more unusual for the 17 years old boy to be a world record holder. Who knows, maybe his… Read more »

Another great take from Yozhik

Whats wrong with you?

yozhik is broadening his horizons. no longer is he limiting his remarks to females, but now he is including underage boys in his analyses. classy as always