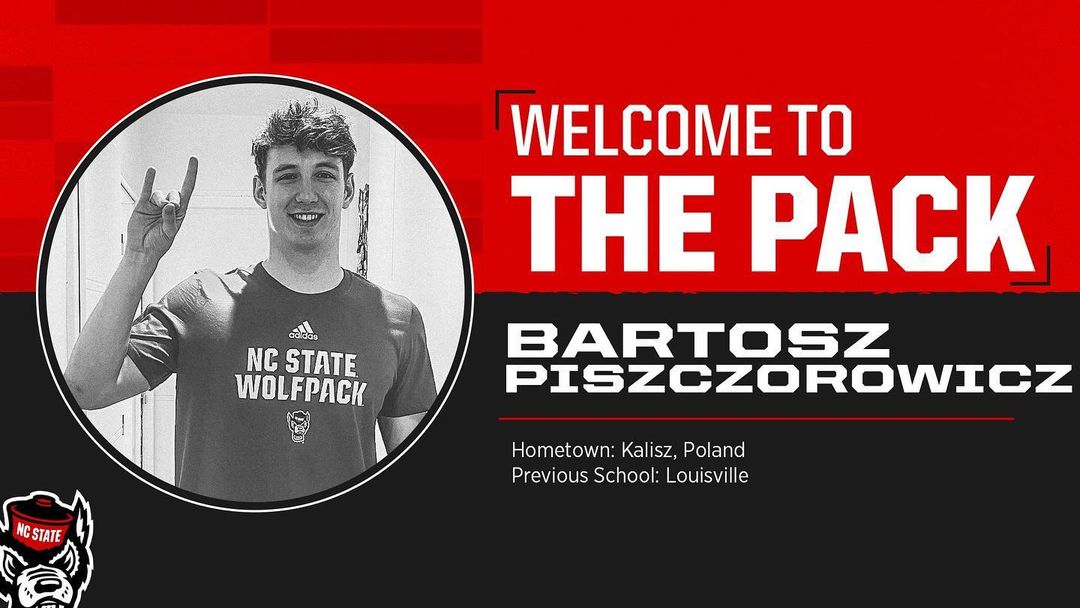 Bartosz Piszczorowicz, the 2019 ACC Champion in the 200 free, will use his last 2 years of college eligibility at NC State. Current photo via NC State Athletics

The NC State Wolfpack have picked up another big piece to add to their puzzle for next fall, announcing the addition of former Louisville Cardinal Bartosz Piszczorowicz as an incoming transfer.

While both NC State and Louisville are members of the ACC, the conference eliminated any additional intraconference transfer burden in March, meaning that he won’t have to sit out a year to begin racing for the Wolfpack.”Great program with even better people,” Piszczorowicz explained of his decision. “Also, my friends and teammates from Poland are at NC State. They have a strong training group can’t wait to train with them.”

In his freshman season in 2018-2019 for Louisville, he was the ACC Championship in the 200 free (1:33.51). That year, he qualified for the NCAA Championships in both individual and relay events. He earned an All-American nod as a member of the Cardinals’ 800 free relay, and also swam prelims legs on their 200 and 400 free relays.

He added time individually at NCAAs, placing 30th in his best event in 1:34.51, and finished the season ranked 28th in the country across all meets.

As a sophomore in 2019-2020, he was unable to improve in any of his primary yards races, and wasn’t qualified individually to race at the NCAA Championships, which were eventually canceled because of the coroanvirus pandemic.

Like many Polish swimmers who had been training at colleges in the US, Piszczorowicz skipped the 2020-2021 collegiate season and trained at home in Poland. That resulted in modest time drops across the long course 50, 100, and 200 freestyle races and earning a spot as a relay-only swimmer at the Olympic Games.

Poland qualified to swim all 7 relays at the Tokyo 2020 Olympics, but had to pull out of the women’s 800 free relay because all four legs did not have “B” cuts individually.

While NC State has been clearly been “one of the best men’s teams in the NCAA” for several years already, the gulf between the best teams (Texas and Cal) and the rest of the country has been substantial.

This class for the Wolfpack, though, has the depth and talent that, if they pan out at the college level akin to their expectations, they could be the group that bridges that gap. The Wolfpack are also bringing in a very fast 2022 class that will continue that effort.

Right now, Piszczorwicz, who turns 22 in October and should have 2 seasons of eligibility remaining, projects initially as a relay addition for the Wolfpack, especially if he can get back to his freshman year times. The NC State 800 free relay, which is graduating two out of four from a 5th-place finish at NCAAs last year.

The Wolfpack will be looking for any boost of NCAA scoring. they can get to seal up their 2023 recruiting class. While that class will arrive after Piszczorowicz exhausts his eligibility, it is likely to be the class that will have the first big opportunity to push NC State over the top in a quest to a national championship.

Wow. Could they win it all in 2022? Assuming they develop these recruits like they’ve proven they can, an NCAA title seems inevitable by 2024.

2022 is too soon. Males can certainly have an impact as freshmen, but nothing on scale of what we saw with, say, Virginia’s female freshmen.

I think 2023 is a possibility. The 2022 freshmen class has the potential to score on a level similar to the Cal class that just graduated with a year under their belt, and the current juniors are a potential big money class assuming they get the best out of Piszczorowicz, Dant, Stokowski, Korstanje, Tapp (moved to backstroke), and Henderson. They don’t lose a ton after this year.

Isn’t the pack also getting Alexander norgaard this season?