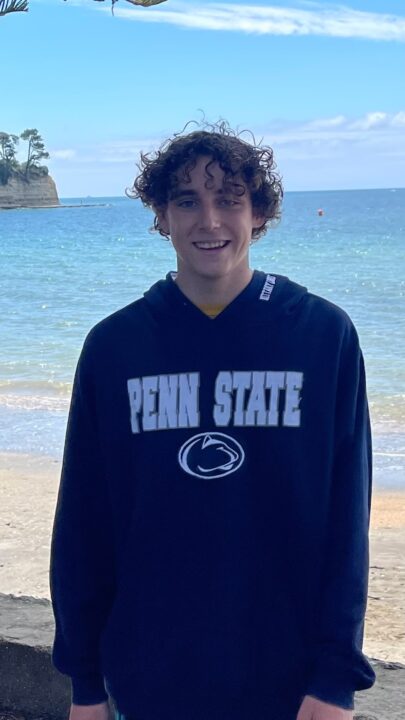 Morley will provide the Nittany Lions with depth across the backstroke events with times that convert to be among the team's best this season.

Coming to Penn State all the way from Auckland, New Zealand, Cooper Morley has announced that he will be joining the Nittany Lions in the fall of 2023. Already one of the top swimmers in his country, Morley is the first commitment for Penn State’s class of 2027, and will join the program following a gap year during the 2022-2023 school year.

“I am extremely excited to announce my verbal commitment to swim for Penn State University 2023 team! Special thanks to everyone for their support throughout the recruitment process. I can’t wait to be part of an amazing swim team!! Go Nittany Lions.”

The Nittany Lion men finished 7th at last year’s Big-10 Championships. The team finished with a pair of medal-winning performances, with Michael Daly topping the field in the 400 IM and William Roberson grabbing bronze in the 50 free. Daly also led the team in the backstroke events at the meet, taking 7th in the 100 and 5th in the 200. He contested the 200 back at the NCAA Championships as well, taking 19th in 1:41.51.

This season, the backstroke group is being led by Daly and Lachlan Byrne, who, like Morley, hails from Oceania. With his best times, Morley would fit in right behind the duo, with a converted time in the 100 back that would put him just behind Daly as the third fastest on the team this season.

The Penn State roster has a strong international presence, with seven of the thirty-two athletes on the roster currently hailing from outside the United States.

Earlier this week, Penn State was forced to cancel their dual meet against Army due to Covid-19 cases within one of the programs.