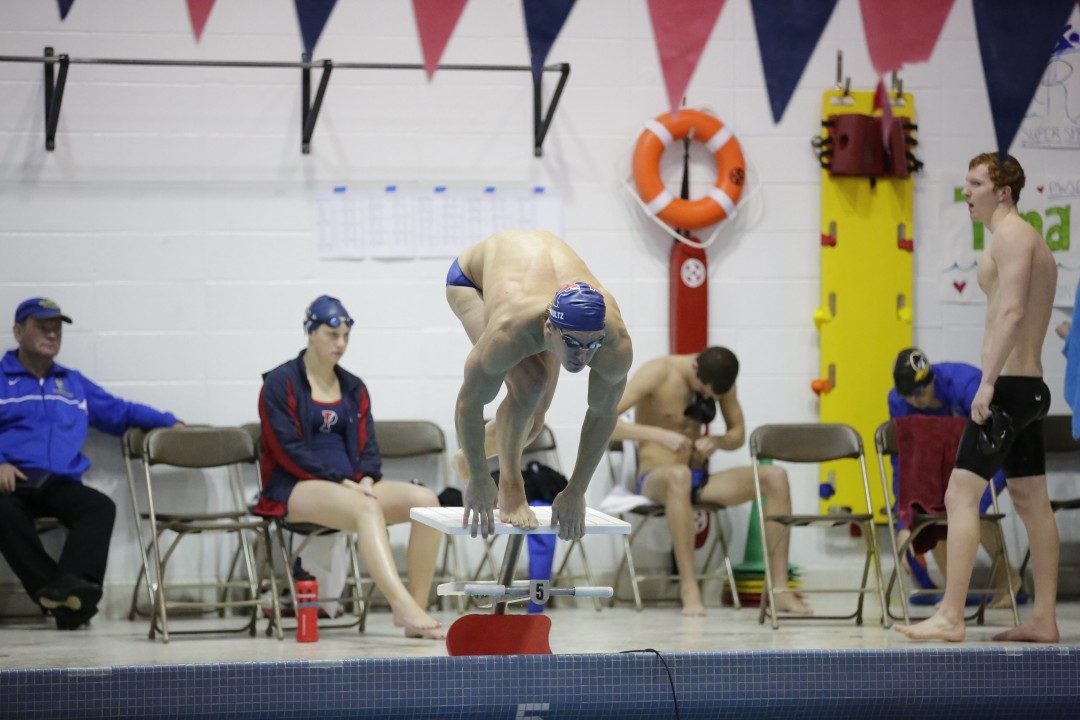 Eric Schultz won the 200 free in one of the closest races of the night. Current photo via Hunter Martin

The University of Pennsylvania garnered two wins against West Chester this weekend, defeating the Golden Rams 164-125 on the men’s side and 185-101 on the women’s side.

The Penn Quakers began the meet with a strong win over West Chester in the 200 medley relay. The team of Libby Jardeleza, Haley Wickham, Nancy Hu, and Kimberly Phan touched in 1:46.35 over their B relay’s time of 1:48.33. The West Chester A relay touched fourth in 1:53.08.

Morgan Scott followed up the relay with another win for the Quakers, taking the 1000 free in 10:20.70. Scott’s new personal best time put her nearly twenty seconds ahead of runner up Madeleine Jardeleza. Dani Barron claimed third for West Chester. Scott’s teammate Meagan Dollard won the 200, following up Scott’s performance with a time of 1:55.05. Dollard touched out West Chester’s Tess Hayward for the win.

Penn freshman Georgia Reilly swept the backstroke disciplines, taking down West Chester’s Elizabeth Miller by nearly three seconds in the 100. Reilly split back-to-back 29’s to post a 59.10 to Miller’s 1:01.98. In the 200, Reilly took the victory over her teammate Sydney Tan, who is primarily a breaststroke swimmer. Reilly edged under the 2:10 barrier, clocking in at 2:09.54 over Tan’s 2:11.61.

Penn’s Mary Whiting took the 500 free, touching eight seconds ahead of West Chester’s Hayward. Whiting clocked in at 5:00.63 while Hayward touched in 5:08.97. Phan followed with another win for the Quakers, securing the 100 fly victory in 57.95. Her teammate Laine Higgins touched just behind in 58.92. West Chester’s top performer, Morgan Haney, touched fourth in 1:04.12, technically winning the event due to the Penn performers racing exhibition.

Virginia Burns, who returns as the defending Ivy League champion in the 500 free, showcased her versatility by winning the 50 free in a time of 24.55. She finished nearly a half second ahead of her teammate Annie Tran‘s 24.93. Haney touched third in 25.22. Rochelle Dong won the longer sprint freestyle event in 52.12, two and a half seconds ahead of Haley Wickham (54.43). Hayward claimed bronze for the Golden Rams in 55.08.

Two freshman Quakers, Madison Visco and Kelsey Prince, locked horns in the 200 fly. Visco took the title, winning in 2:08.04 over Prince’s 2:08.78. Felicia Grego finished fourth for the Golden Rams. The 400 IM featured an even closer race between Penn’s Megan Alexander and Lia Lombardi, with Alexander showcasing a dominant front half and Lombardi closing fast on the breast and free legs. The two touched virtually dead even but the win went to Alexander, who bested Lombardi 4:31.40 to 4:31.48. Emelie Johansson claimed the technical win for West Chester due to exhibition swims, touching fourth in 4:39.55.

Johansson picked up a win for the Golden Rams in the 100 breast, beating Penn’s Marissa Moskalow 1:09.31 to 1:10.10. Hu won the longer breaststroke for the Quakers, touching over Johansson in 2:25.27. Despite posting a second 100 a full two seconds faster than Hu’s, Johansson could not close the gap and finished second in 2:25.78.

The Quakers won the first individual event through Taylor Uselis, who won the 1000 free. Uselis touched for gold over his teammate Bradley Wachenfeld, 9:31.49 to 9:37.06. West Chester’s Bradley Strathmeyer finished fourth in 9:50.72.

The 200 free followed, featuring a showdown between Penn’s Eric Schultz and West Chester’s Victor Polyakov. Schultz raced out to an early lead, and though Polyakov charged past him on the third 50, Schultz dug deep to close under 25 seconds and take the win by seven hundredths. Schultz, the defending Ivy League champion, touched in 1:39.46 to Polyakov’s 1:39.53, with Penn freshman Stephen Marcin picking up bronze.

Although Polyakov won the 400 IM due to Penn exhibition swims, Penn freshman Thomas Dillinger broke the Sheerr pool record to touch first, finishing ahead of the mark formerly held by Harvard’s Niall Janney. Dillinger hit the wall in 3:57.53 to hold off his teammate Alex Peterson, who also broke four minutes in 3:59.28.

CJ Schaffer and Brian Foley were responsible for two Quaker wins in the backstroke events, with Schaffer taking the 100 and Foley dominating the 200. Schaffer touched in 51.47 over his teammate Mark Blinstrub and West Chester’s Dan Sokman. Foley won the 200 in 1:54.46 to complete a Penn podium sweep with Andrew Drummond (1:57.57) and Uselis (1:58.31). West Chester’s Michael O’Brien topped the Golden Rams performers, finishing fourth in 2:02.18.

Penn’s Kevin Su and Zach Fisher pushed each other to the wall in the 50 free, with Su barely edging Fisher 21.00 to 21.16. West Chester’s Evan Sherkness took bronze in 21.74. Jimmy Jameson took the title of 100 free champion over Sokman from West Chester, touching in 46.56 to Sokman’s 47.44. Penn sprinter Kevin Intrieri came in third with a time of 47.81.

Freshman breaststroker Colin McHugh won the sprint event in 56.61, touching a tenth of a second over his teammate Kyle Yu (56.71). McHugh’s time sits within a second and a half of the Sheerr pool record of 55.18. The record belongs to McHugh’s older brother, U.S. Open record holder Brendan McHugh. West Chester’s Michael Oliver dominated the back half of the 200 breast to take the win over Penn’s CJ Schaffer, touching in 2:03.13 to Schaffer’s 2:04.63.

Luke Maguire granted the Golden Rams another win in the 100 fly, crushing the competition in 50.97. Penn’s Blinstrub touched the wall second in 53.04, narrowly edging out his teammate Sam Haley. Hunter Brakovec won the longer fly for the Quakers in 1:51.50, touching ahead of Haley (1:54.88). West Chester’s Eric Long took bronze.

The Quakers swept the relays and diving events, winning the 200 medley relay in 1:31.96 and the 200 free relay in 1:24.01. Andrew Bologna emerged victorious in the one-meter diving event with 272.70 points over his teammate Trent Hagenbuch and West Chester’s Dan Roy. Roy managed to top Bologna in the three-meter event, winning 317.40 to 311.88.