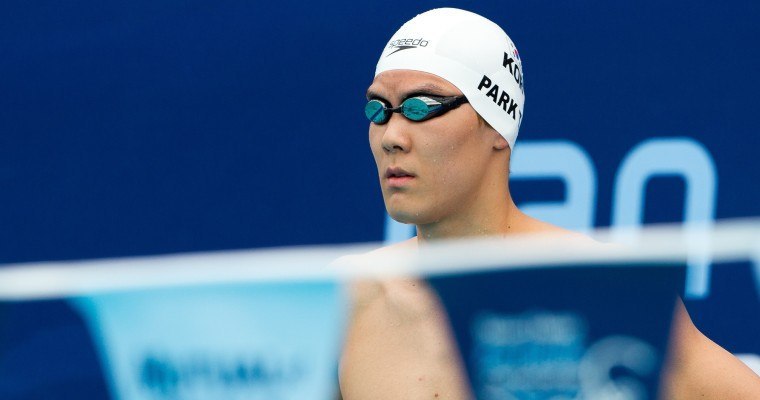 "I especially want to do well in the 200m and the 400m," says Korean Park Tae Hwan of the upcoming World Championships. Archive photo via Tim Binning/TheSwimPictures.com

2008 Olympic champion Park Tae Hwan of Korea has returned home from Australia this week, where the 27-year-old has spent the last several months training at Warringah under Coach Tim Lane. He will be in his home nation just briefly before moving on to a training camp in Rome, then on to Budapest to compete at the 2017 FINA World Championships, his first in a LCM pool since 2011.

Using the Arena Pro Swim Series in Atlanta as his qualifying meet, Park qualified for Worlds in the 100m, 200m, 400m and 1500m freestyle events, although it’s not yet certain if he’ll go as short as the 100m.

“As an athlete, you want to collect a good result in every event,” Park said in an interview with Yonhap this week. “But I especially want to do well in the 200m and the 400m, and I hope I can beat my personal best this time.”

“Short distance swimming is still tough,” he said. “I did train, but I’m still considering whether I should compete.”

Park is listed among the world’s fastest in all of the freestyle events, highlighted by a 4th place ranking in the 400m from that Atlanta meet. The freestyle specialist was faster in the 200m back in November where he registered a mark of 1:45.16, which still sits as the 2nd fastest in the world only behind China’s Sun Yang.

After a troubled lead-up to the 2016 Olympic Games where Park was only granted the go-ahead to compete at the 11th hour, he failed to make the Rio finals in the 100m/200m/400m and ultimately withdrew from the 1500m event.

Heading into Budapest, Park states, “It’s not about competition, but I frequently thought about how I need to show something and prove myself. For this year’s worlds, we’ll see newcomers and those who have performed well at the Olympics, so this is a good opportunity for me.

“I think next year’s Asian Games will probably serve as a good period for me to set a world record before I quit swimming,” he said. “But it’s going to be too hard for me to break a world record at the upcoming worlds.”

As perhaps a vote of confidence, Arena has entered a sponsorship agreement with Park, per the Asian news source ChoSun.