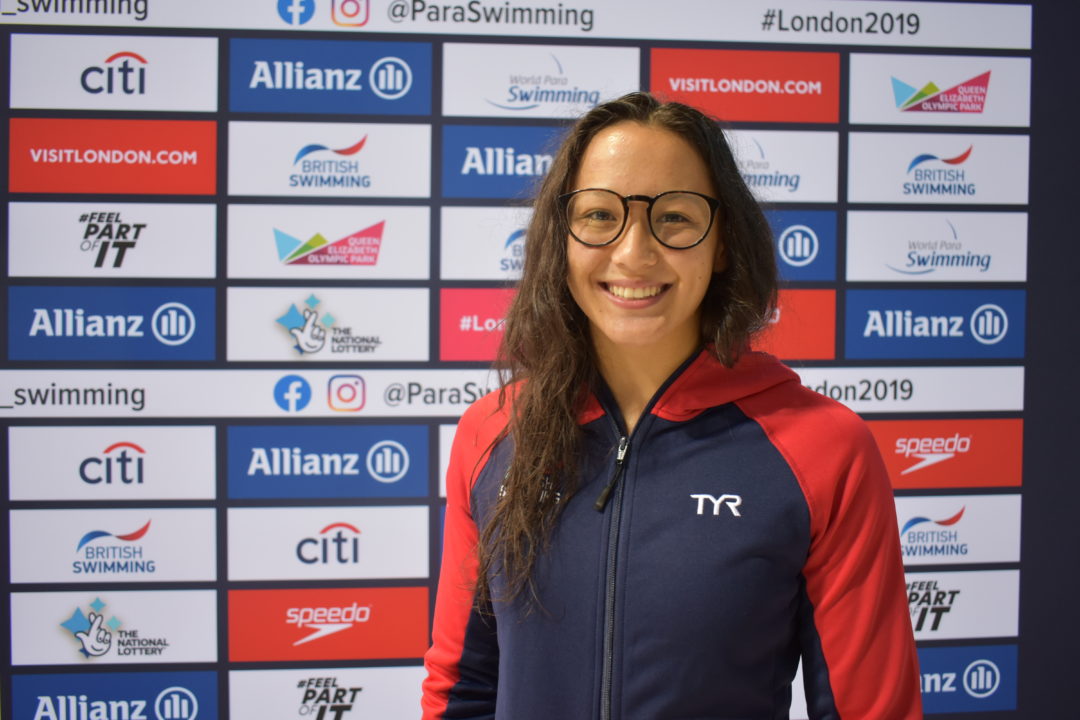 Britain’s Alice Tai says her stellar form at the 2019 World Para-Swimming Championships is down to concentrating on herself instead of external factors. Current photo via Nate Williams Media

Britain’s Alice Tai says her stellar form at the 2019 World Para-Swimming Championships is down to concentrating on herself instead of external factors in London.

The 20-year-old from Poole, Bournemouth, in southern England has competed every day since the event started on Monday, earning a streak of four golds in the S8 100m freestyle, backstroke, butterfly and the 400m freestyle on Thursday evening.

Tai, who has bilateral talipes (commonly known as club foot), was originally in the highest physical category of S10 but was moved down in the controversial classification changes made by World Para-Swimming.

Tai was reclassified down to an S9 after her first Paralympic Games in 2016 before being moved down further in 2018. She says that at first, she felt she couldn’t compete at her true best but now, winning races is all that matters.

“When I first got moved down, I struggled a bit because for me, having been in an upper class it felt a bit awkward,” said Tai.

“I felt I couldn’t perform as good as I could because I felt bad on the other competitors. But this year, I’ve just been focusing on swimming for myself. Regardless of where I come in a race, if it’s a good swim for me then I couldn’t be more happier with that.”

USA’s Jessica Long, a 13-time Paralympic champion of the S8 category, has questioned the classification changes, saying to the BBC this week that at times she feels ‘heartbroken’ by the new introductions.

In Thursday’s 400m freestyle, Tai was behind Long but gained a good length on the turns against her American rival.

The difference coming from Tai having both her legs to push and double-amputee Long needing extra power through her upper body to try and close the gap.

“Being an amputee there’s not much I can do with the turns,” Long commented on the disparity.

“But I try to use other parts of my body like my arms or lats but that wasn’t a great race for me. On form, I’m probably 11 seconds faster and I can do that with proper training.”

She added:  “My body just shuts down. That race really requires endurance and I haven’t been training for distance so I want to go back to the drawing board and start doing that.”

However, even though Tai knew the winning margin would come on the turns, she admits that was a race that really brought the best out of her.

“That’s a time I’ve not gone in a while so having her in front of me for the majority really pushed me and I couldn’t be happier with that outcome.

“Me and my coach (Dave Heathcock) sat down and watched her 400 just before the final and I knew her turns would be her weakest point, but her biggest strength is her swimming stroke, it’s incredible. We really try to utilize my turns, my breakouts and rotation speed.”

Tai sportingly admitted that she could possibly change class again in the future and will be next reviewed by World Para-Swimming classifiers in 2021, but this leaves her with a feeling of uncertainty.

“I am a borderline S8 slash S9 from the results of my last review so anything could happen,” Tai said.

“After Tokyo 2020, I could move back to an S9 or stay as an S8. If they (the IPC) change the system again, I could end up somewhere else. It’s all down to what the classifiers see and their decision is fine with me.”

Meanwhile for Long, her outstanding record of at least one gold medal at every major competition since the Athens 2004 Paralympics is in jeopardy. The 27-year-old has won 13 Paralympic golds and 23 world titles since 2006.

In London this week, she has finished behind Tai for silver in three of five events, while not making the podium in fourth place for two others with two events remaining.

However, Long has had other personal commitments on her mind.

“I’m getting married in a month,” she said.  “This (record of gold medals) means nothing to me.”

If the week had caused upset then last night was another level, how can that be an 8 breaststroke perfect dive perfect turn perfect finished and perfect balanced stroke. and the live stream highlights, highlight this in form the girl behind the block is most certainly not the girl then swimming !!!!! It’a shameful it has also been mentioned that she was national silver medalist able bodied in 2016, this is a disgrace To the sport British’s swimming have been shameful this meet ….

Where are you getting this from? I looked up the British Nationals in 2016 and the silver medalist was Sarah Vasey.

I checked all the age-group results and the heats, too, and Whiston wasn’t anywhere on there.

So, in short, she didn’t win silver at British Nationals at all, but instead came third (second in the heats) in some other, MUCH slower amateur competition (of unknown provenance– I googled “ASA Swim for Life 2016” and got nothing of any use) a week later. Vasey’s time would have demolished that competition by four body lengths.

I’m open to buying what you’re selling– as I said on another thread, Whiston’s 200 IM breaststroke split would have been world-class for an able-bodied swimmer, and that kind of insane outlier can’t help but raise suspicions– but you’re not helping your cause by misstating the facts. So far there’s still not a shred of actual evidence to support the theory that she’s… Read more »

No Paul. There is no misstatement. These results are from British Nationals. Whiston clearly won the silver medal in the 17yrs and over able bodied age group category. Fact. Whiston claims congenital Left Hemiplegic CP. Her results, which are listed in full on British Swimming’s website, paints a story of a major performance dip which coincides with classification for Para Swimming and then a return to form. Fact. The focus should be on British Swimming.

So the Brits are off to cheating as usual. Like someone above said she should be embrassed because it was not a fair swim.
If this is a sign of what the olympics will be like not worth going or watching.

If it’s not been embarrassing enough for the Brits then tonight took it too another level the British team have truly stepped up the cheating… surely if the Russians get pulled for doping this is the equivalent in Paralympic sport… I’ve never seen 8s swim like the brits did tonight especially the breaststroke leg !!!!! such a shame that Paralympic sport has worked so hard to gain a following and this Is now what is shown cheating at huge level…

It was awful to watch. We certainly have experienced the extraordinary with both Whiston and Patterson. Sad that they have allowed this blatant abuse to go on and on. Craig Nicholson, what say you about Whiston’s performance in the pool?

Are you kidding. I would handle it well too if it meant I got all the world records and gold medals eventhough I didn’t deserve them.How do you think Jessica Long feels

Very similar to all the other genuine athletes who have walked away or are cheated of medals by these frauds.
The IPC have a lot to answer for.

Putting aside that Tai is ‘not a 400 freestyle swimmer’ and Long clearly is performing below her best, this particular race almost perfectly demonstrates how unfair bilateral club feet v double below knee amp really is. The ‘scientists’ behind the clearly flawed system need to speak up. Hats off to Tai though, as a young athlete she’s handling a difficult situation, which is not of her doing, very well.

Just to throw it out there…Jess has been almost 10 seconds faster than what she went in finals in the 400, and her prelims times would have won the finals. Not to say that Alicia shouldn’t be moved up however….

Speed has nothing to do with it. Look at ability.

IPC swimming classification is, sadly, a circus. Look at the men’s 100 meter fly finals. Only one man without a leg, others had both legs and both arms. I’m glad I stopped swimming before this nonsense that happened in 2016.

They(the IPC) should publish a paper documenting the science behind the determination that two club feet is an S8.

This is not and apples to apples race. So difficult to even wrap one’s head around how clubbed feet is equal to double amputee of the legs. Para swimming is becoming irrelevant and not worth watching as it’s just too frustrating to see misclassifications rule the pool.

I completely agree! Unsportsmanlike is the norm now.
How can you be proud if you are swimming the wrong
Classification? She should be embarrassed!

Don’t get personal , it’s not her fault. The classification system is something that will always be controversial.

Not true, if you are aware that you are part of cheating, the classy thing to do would be to question the classification. But most of the blame I put on the USA coaches and those who could protest the classification. They should be stepping up and protecting their swimmers and they don’t. They even try to make it as hard as possible for the team when they are travelling. There are times when the team has to walk from where they are staying to the pool. I have seen that happen more than once. That means three trips to and from the pool before the final swim. Therefore they are using their energy for transportation. Surely, The USA can… Read more »

I wouldn’t go as far to call it unsportsmanlike (there is too much hate and shade thrown in this world)- the athletes dont classify themselves- other bodies and organisations determine all that. I just think it is just an impossible task to compare apples and oranges… and I have lost interest too.

Correction. Her classifications have been S10,NE,S9,S7,S8 and now S9.

Don’t fool yourself. Unfortunately many of these athletes know exactly how to classify down. We see and hear about all the time. Unsportsmanlike is when you take advantage of the system knowing what class you should be in just to set records and win money!