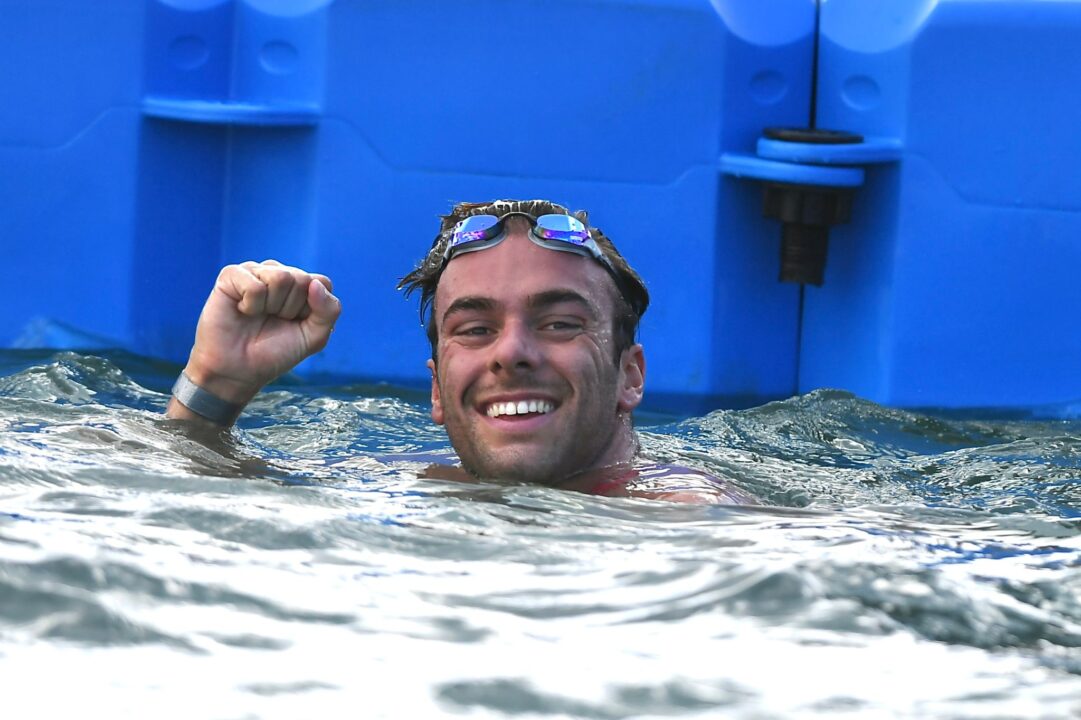 Paltrinieri's win moved him into a tie for the overall series title with Kristof Rasovszky, while Ana Marcela Cunha emerges as the women's series winner. Archive photo via Fabio Cetti

The 2022 Swammy for Male Open Water Swimmer of the Year goes to Italy’s Gregorio Paltrinieri, the gold medalist in the 10k event at the World Championships.

Despite finishing second, Ana Marcela Cunha claimed the women’s overall title for the FINA Marathon World Series while Gregorio Paltrinieri and Kristof Rasovszky tied for the men’s overall title based on their final positioning in the Israel ocean-side resort city of Eilat.

The pace was hot in the final stop of the FINA Marathon World Series in Eilat, Israel as it was Gregorio Paltrinieri coming out on top on the final sprint with a 1:46:41.80. It was Paltrinieri’s third win in the series after sitting out the race in Canada and taking victories in Portugal and France.

“It was a good race, all the toughest guys were here,” Paltrinieri said. “That makes it enjoyable to win this race.

“There were a lot of tactics; we were all keeping our eyes on each other, but that’s open water racing,” Paltrinieri added.

Coming into the weekend, in order for him to win the overall title he would need to win, and Hungary’s Kristof Rasovszky would need to finish fifth or worse.

🇮🇹 @greg_palt takes home the win 🥇 after a sprint in the final stretch of the Men’s 10km in Eilat 🇮🇱 #openwater pic.twitter.com/MuH8uz8dpC

However, Rasovszky finished fourth at 1:46:45.40, and those two ended up tying for the overall title. Rasovszky was one-tenth away from fifth place in the race – Domenico Acerenza was a 1:46:45.50 to just miss allowing his teammate Paltrinieri to enjoy the title solo.

Rasovszky had led the race at halfway, but Paltrinieri had kept the lead in his sights, pouncing on the right opportunity and hitting his speed on the final lap to perfection, touching first at the very end by nearly two full seconds.

Hungary’s David Betlehem, one of the rising stars in the 10K, led the race early to set the fast pace. Betlehem, just 19, has been tabbed as one of the future stars in open water swimming, winning the gold medal at the FINA World Junior Open Water Championships earlier this year and winning team silver at the FINA World Championships and the European Champs in 2022. He finished third overall, hanging near the lead the entirety of the race at 1:46:44.20.

Moving forward, Betlehem will certainly be one to watch for the 20th FINA World Championships next summer in Japan and the Paris 2024 Olympics.

France’s Marc-Antoine Olivier had been among the leaders for the race, waiting to make his move, but in the end, Olivier could not match the speed of Paltrinieri as he finished second overall at 1:46:43.40.

Paltrinieri, winning three of the four World Series races he competed in, topped the money list while he tied Rasovszky for the points standings.

Bethlehem was third ahead of Acerenza and Andrea Manzi, who was sixth in Israel at 1:46:47.10.

“Oh, that feels good,” Paltrinieri said while receiving his global 2022 series title. “It’s my first year winning the overall. In the past years, I never did the entire world series. It’s a great achievement for me.”

A bit of a surprise, the 2022 overall world series title is Paltrinieri’s first, with the open water and pool swimmer saying he wanted to emphasize the longer distance racing this year.

For the women’s race, with all the attention on the deadlock between Ana Marcela Cunha and Sharon Van Rouwendaal, it was Australia’s Chelsea Gubecka in the very end who came out on top with the race win at 1:56:19.80.

“I’m a bit speechless, to be honest,” Gubecka said. “I got on that last lap, and I just had that little extra surge of energy. Yeah, that felt great.”

However, Cunha finished second in the race at 1:56:23.60 and won the overall title as Van Rouwendaal had made a move on lap four but couldn’t quite get it going, as she finished fifth overall at 1:56:28.20.

Gubecka paced the race well, climbing to the lead on the final lap with Italy’s Ginevra Taddeucci, who faded to ninth despite holding the lead heading into lap six.

Gubecka held her lead, despite veering a little bit away from the pack on the final straightaway but held on to claim her first win in the series in only her second race as she beat two of the best open water swimmers in history in Cunha and Van Rouwendaal.

Race water temperature was reported to be around 24.8 degrees Celsius at the start of the men’s race early in the morning.

Ana Marcela Cunha keeps writing her name into the record books, with her 2022 overall title marking her sixth in the FINA Marathon Swim World Series. Her global overall title this year follows her previous triumphs in 2021, 2018, 2014, 2012 and 2010.

“We have a new generation of swimmers coming up fast, but I can still use my experience,” Cunha said after the final race in Eilat. “I am happy with my results, not just here but throughout the whole year – from the FINA World Championships to the World Series events to the South American Championships.”

So happy for Chelsea!