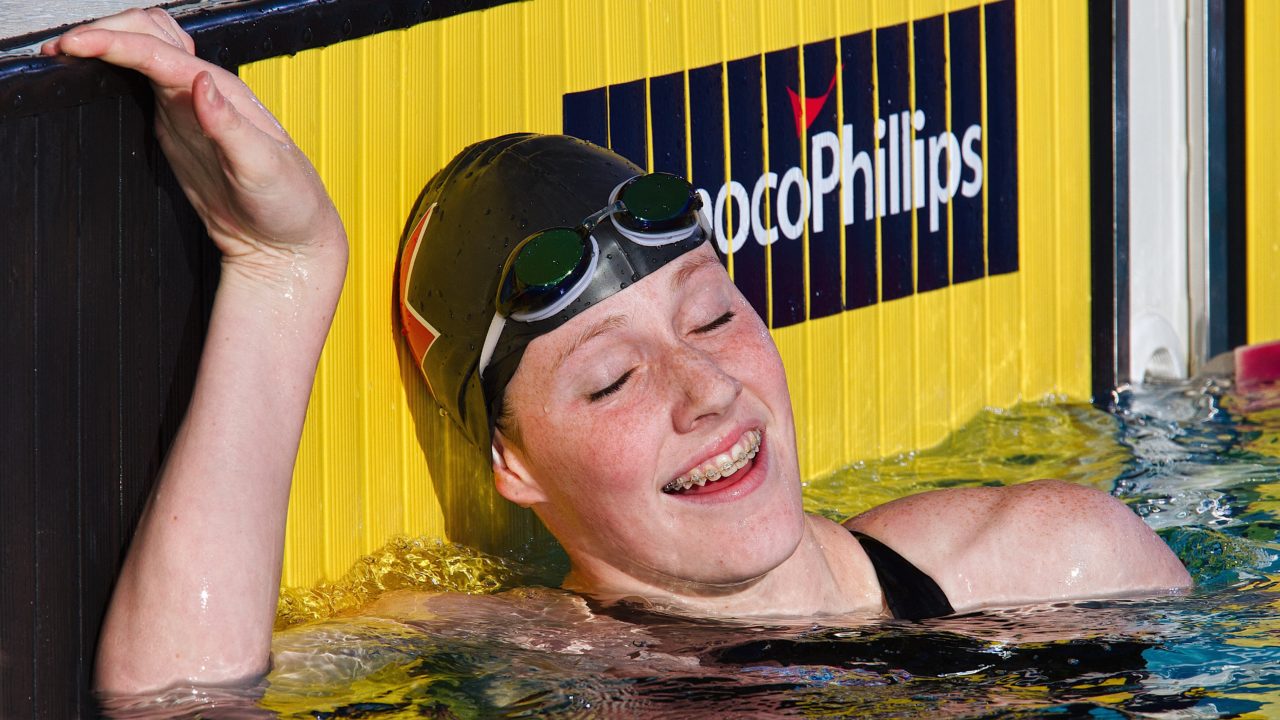 Missy Franklin is the obvious number 1 recruit in the class of 2013, but who's behind her?

July 1st, 2012 was the opening of the 2012-2013 college recruiting season where NCAA coaches were first able to legally call incoming seniors who they hope will attend their institutions.

Coaches are now allowed to make one phone call a week, and send an unlimited amount of mail and email, to seniors who will be graduating in the spring (or, in some cases, at the end of the fall semester).

And in Olympic years, the feeding-frenzy is even bigger. The recruiting period opens while in Omaha, and don’t think that coaches don’t take advantage. Every high school senior at that meet can expect a new watching-partner for a race or two, because if a high school senior is good enough to qualify for Trials, there’s a coach there who is going to try and recruit them.

Here’s our top10 recruits for the class of 2013, for the women. We’ll focus on Americans, because it’s never a certainty what international swimmers will end up doing. If you would like to announce a verbal committment to SwimSwam, please email us at [email protected]

1. Missy Franklin, Colorado – What more really needs to be said about the world’s best teenage swimmer (if not female swimmer, period) Missy Franklin. As a freshman, she would be a near-lock to place top three in the 50/100/200 free, 100/200 back, and probably quite a few other events that she just hasn’t raced often enough to know (100 fly/200 fly, 500 free, 200/400 IM). Keep in mind that her yards swims are done largely in Colorado altitude, as well. School’s that she’s said she’ll take visits to are Stanford, Georgia, and Cal.

2. Lia Neal, New York – Lia Neal is the other “Olympian” in this class aside from Franklin, having placed 4th at the Olympic Trials in the 100 free and earned herself a relay spot for London. She is right along Vredeveld as the best 1-2 sprint combination we’ve ever seen coming out of high school. Her experience at the Olympics is going to be invaluable, and she still has mega-potential to improve. The only knock against her is that she’s going to be good enough to go pro before finishing her college career (and hasn’t been as adamant about finishing all four years of eligibility as Franklin has been – though she probably hasn’t been asked as much until now either).

3. Emily Cameron, Pennsylvania – In another year, Cameron might be closer to the number 4 or 5 recruit in the country. But in this year, where the breaststroke class is so thin, she carries enormous value for teams that are in need (like the Cal women). Only one other junior last year was within a second of her 1:00.54 in the 100, but she’s really demonstrated amazing versatility in the last year to rocket her stock up. She broke the Pennsylvania 50 free State Record with a 22.75, has a 49.4 in the 100 free, and a 1:57 in the 200 IM as well. She’s a 5-relay swimmer as a freshman for many programs.

4. Kristen Vredeveld, Tennessee – Out of the famed Baylor program, Vredeveld gets high-honors as being the top yards-sprinter in the class, to date. Given the history of Baylor School athletes to stay in the Eastern half of the country, for teams in the SEC and ACC, this signing is likely going to be a primary objective. Her older brother Nathan is a senior at Virginia, and this program has sent some elite swimmers to both Georgia and Tennessee the last few years. She’s already got multiple state titles and NCSA Junior National titles under her belt, and she still seems to still have some room for improvement (she’s got a frame that could handle a little more musculature still). If she can even make small improvements next year, she’ll be in the conversation with the likes of Maddy Schaeffer, Kara Lynn Joyce, and Amanda Weir for the best high school sprinters in the last decade.

5. Olivia Smoliga, Illinois – Smoliga doesn’t quite have the versatility as a swimmer like Missy Franklin, but it can’t be overlooked that she also broke a minute long course in the 100 back at the Olympic Trials. Aside from her backstrokes (she probably has a top-8 200 as well in yards, but hasn’t swum it much in the last year), she’s a good enough sprinter to take either bookend of the medley relay in most programs. For teams who need premier backstrokers, Smoliga will be a huge consolation prize if they can’t land Franklin.

Im thankful for the article post.Really thank you! Keep writing.

Calif already has three backstrokers, Boothsma, Pelton and Tran in the 100 yard. Pelton is good in the 200 yard. Boothsma and Tran are also good at 100 yard fly. So, Franklin may pick another school.

Franklin is also a pretty great freestyler.. I’m fairly certain she could throw down a ~1:53ish in the SCY IM if she ever swam it fully ready to go. Any college is going to throw everything they’ve got into getting that one.

With all the talk from her about how much she loves her team and her high school swimming experience, it seems like her an McKeever (who is pretty big on the team thing herself) would be a great fit.

I see her going to Cal.. even though if they get her the NCAA Team race isnt even going to be fair. But hey, 4 possible Olympic Gold Medals later it might be too hard to say… Read more »

I would not be shocked to see Vredeveld at UVA just due to the fact that her brother swims there, and when Perdue leaves there will be huge hole on the sprint side. I think they would offer her the moon to come there.

Also, I think Celina Li would do quite well training with Beisel/Crippen in Florida

Crippen is retired. but there are other good butterfly/IMers there

I’m generally of the opinion that swimmers stay close to their home, culturally and/or geographically. So I say:

Franklin – Cal. Good school (we know that’s important to her), and fits well with her quality-over-quantity background training. From what I hear, she’s on the low-distance end of the training spectrum; Georgia just doesn’t seem to fit that, and Stanford is going through an uncertain coaching turnover. The Franklin-Pelton-Bootsma-Tran training group kind of gives me shivers, though.

Neal – Columbia. Total wildcard, I know. But city girls always seem reluctant to move to a college town; it’s a great school and has an ascendent program. She could probably still train at AGUA.

Celina Li goes to Cal (close to home, right events for Cal)
Emily Cameron goes to Texas (Capitani is great with breaststrokers)
Vredeveld and Zilinskas to Florida (Zilinskas is tailor made for Florida, Baylor has sent several swimmers to Florida successfully)
Neal and Franklin to Stanford (Want the best education)
Cheneault and Leah Smith to Georgia (Middle distance freestyle haven)
Smoliga to USC (They will throw the kitchen sink at her to land her on their team)
Kaitlyn Jones to Tennessee (Kredich needs her versatility)

The last girl Baylor sent to Florida was a sprinter, and she left an NCAA champion, both as a team and in the 200 free relay.

Best times out of high school vs. Best times at Florida –

I suppose NCAA Champion isn’t a bad title after four years of college swimming. Congrats to her for doing that and I certainly do not want to take away from those accomplishments. I do believe however that a different program would have produced very different results. Yes, she dropped time at Florida, but based on her high school times did she reach her full potential? When you’re already 22.5 out of high school you need world class sprint training to make any significant drops thereafter, and especially coming from Baylor where kids already doing weights… Read more »