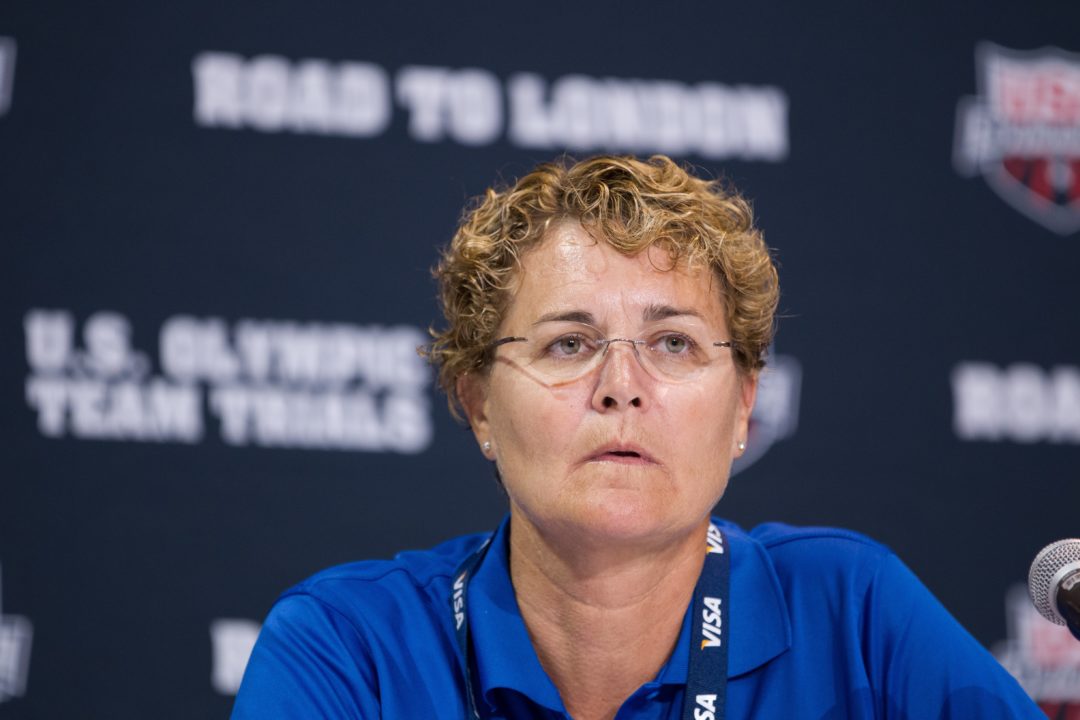 To see all of the latest news on recruiting, check out the category listing here.

Celina Li from the Pleasanton Seahawks and Foothill High School (less than an hour’s drive away) has committed to Cal, giving the two-time defending champion Cal Bears their second mega-recruit in the last week.

Li is a member of the United States Junior National Team for the 2012-2013 season after finishing 6th in the 200 IM at the Olympic Trials in June.

That time in the 400 would have left her 11th at NCAA’s last season. The opportunity to train with senior Olympian Caitlin Leverenz (who will likely be a Cal postgrad after this season) will be invaluable to Li’s development, though the two swim very different races. Whereas Leverenz has an explosive breaststroke, Li has taken a much more balanced approach to her race.

It will be interesting to see if like she did early Leverenz’s career, Cal head coach Teri McKeever encourages Li to focus on attacking her primary stroke. Li comes in with bests of 52.7/1:56.8 in the 100 and 200 flys, both of which would have put her very close to B-Finals last year at NCAA’s as well.

Li has some international experience already, having traveled to the FINA World Cup Series in both 2010 and 2011, and is the California North Coast Section record holder in the 100 fly. She joins Kristen Vredeveld in giving a verbal commitment to McKeever and the Golden Bears. Interesting to note is that Li and Vredeveld both visited Cal on the same weekend as the biggest high school recruit ever: Missy Franklin.

How many scholarships do they have?? It’s seems like they are endless amounts of top recruits going to cal. My guess Is that this is the last big time recruit they are bringing in besides missy Franklin, who’s going there seems inevitable. Not enough scholarships with all the stars they already have.

Interesting to note that Caitlin is the only senior this year, which means Teri has been saving those scholarships.

True, but you know Teri is keeping 1 full scholarship around for Missy.
On a different note I know that California state schools admission has sky rocketed in the recession, there have been big student protests about it. I am sure this has made them give out some higher percentage scholarships then they have wanted to.

According to Cal’s website, their non-resident tuition is $36,078 n.i. books, health ins., room/board & personal transportation which would bring the total costs up to between $51,478 and $54,578 depending on whether living off or on campus.

Leverenz is a senior, and while it’s likely that she will stay in Berkeley to train for 2016, she and Li will never swim together for the Bears.

Cal turns down 40k applicants every year, so there’s great demand for slots at Cal. Cal rugby doesn’t offer scholarships, but they do have some pull with admissions and consequently attract recruits from around the world who appreciate Cal’s athletic and academic excellence.

Possibly some of the instaters qualified for academic scholarships or need-based financial aid?

Cal doesn’t have academic scholarships, except for the Regents and Chancellor’s Scholar award, which is only given to the most academically elite applicants (~200) as a way to attract those who are likely considering Ivies, Stanford, MIT, Hopkins, etc. Monetarily it’s only $1000 a year so it doesn’t really help much financially, though it does provide benefits such as early registration, priority housing, academic support, scholars’ only events, etc. Need-based financial aid is extremely difficult to get–you essentially need to qualify for the Pell grant. I think duckduckgoose is right in terms of the pull the athletic department is able to have in terms of admissions. Two guys from my high school, both excellent swimmers though probably not elite-level, ended… Read more »

We are fortunate in swimming to have many great academic institutions that also have great swim programs- USNews top 25 include (in alpha) Columbia, Notre Dame, Princeton, Stanford, UC-Berkeley (Cal), UCLA, USC (Southern Cal) and UVA who also happen to be in the top 25 womens &/or men’s Div 1 S&D 2012 programs. These schools are top 25 academic & top 4 in women’s div 1 S&D and top 7 in men’s div 1 S&D – Stan, UC-Berkeley (Cal) & USC. Just saying PAC 12 S&D…..

According to their website, the 2012-12 Cal Women’s roster has 24 on it including divers. 12 of the 24 are non-residents which means $22,878 more in tuition for them. When non California residents, at least the playing field for the tuition costs for goign after recruits is more comparable for the other 2 private schools in California competing for the same athletes.

0
0
Reply
Sam I Am
Reply to  anonymous

Roth left the team after this past season, leaving another opening.

I know this isn’t about Celina Li, but I laughed when I read that Missy Franklin is apparently the “biggest high school recruit ever.” I get it because she has WRs, Gold Medals, and her success in LCM. She probably is, but I can’t imagine her ever winning 3 individual events at NCAAs. She is a much better LCM swimmer, and probably isn’t going to beat Tran or Bootsma in the 100 Back in SCY. I’m sure she will win both the 200 Back and 200 Free, but I really wonder if she has the speed/UWs to win the 100 Back. If it wasn’t for Natalie Coughlin completely shutting down her last 30 of her 200 Back her senior year,… Read more »

I’m pretty sure the honor of “Biggest High School Recruit Ever” would have to go to Tracy Caulkins. Even though you could swim more than three individual events at NCs back then, she won 12 individual titles in three years, and held 6 individual NCAA records when she retired following the 1984 Olympics. She didn’t even swim her senior year.

Is the award for “biggest high school recruit ever” given at the completion of their college career or on July 1 before their senior year of high school?

At age 15, Tracy Caulkins won 5 gold (both IMs, 200 fly, relays) and a silver at the 1978 World Championships and was supposed to be the big star of Moscow 1980. At 16, she broke American yards records in the 100 breast, 100 and 500 free, and the 200 and 400 im. By the time she was a senior in high school, she added the 200 backstroke to her list of American records and rebroke all of her prior records, so yeah. Imagine a recruit who by the age of 18 holds American records in every single stroke, and has won a World or National title in nearly every single event. That was Tracy Caulkins.

Appreciate the knowledge (and sass), but my question is still relevant to the original posts on Caulkins and Coughlin, which only made mention of collegiate accomplishments. And yes, I also know that Coughlin had qualified in every event for Nationals by age 16 or so.

No competition even if Cal hasn’t Missy. Rachel Bootsma, Elizabeth Pelton, Cindy Tran, Lauren Driscoll, Kelly Naze, Kristen Vredeveld and now Celina Li! Is there a rule like in NBA with the salary cap? Can an university buy all swimmers they want? You talk about scholarships but I don’t know the rules. Is there a limit? Because if almost all biggest talents go in the same place it means the end of the competition.

Women are limited to a maximum of 14 scholarships, men have 9.9. Cal is fully funded, so they have one scholarship left for Missy or Lia Neal, if they want to swim for Cal. Would also not be surprised if Teri added an instate Californian (Linnea Mack) like they did last year with locals Rachel Acker and Alicia Grima.

Thank you for the answer. So if I understand well a school can take the 5 or 6 best swimmers of a season.

You’re welcome. Schools can divide up their scholarship money within the men’s and women’s teams anyway they want, so there’s no limit to how many swimmers they bring in every year, but there are limits to the total amount of scholarship money they can spend. Teams generally want a balance between classes and events, so on average a women’s team spends 3.5 (14/4) scholarships per year and men will spend 2.5 (9.9/4) per year. Superstars like Missy get full scholarships, and most everyone else divides up partial scholarships. Someone who doesn’t receive any scholarship money is called a “walk on”, Public schools in large states with a large number of swimmers (Cal, Texas, Florida) have an advantage because they charge… Read more »