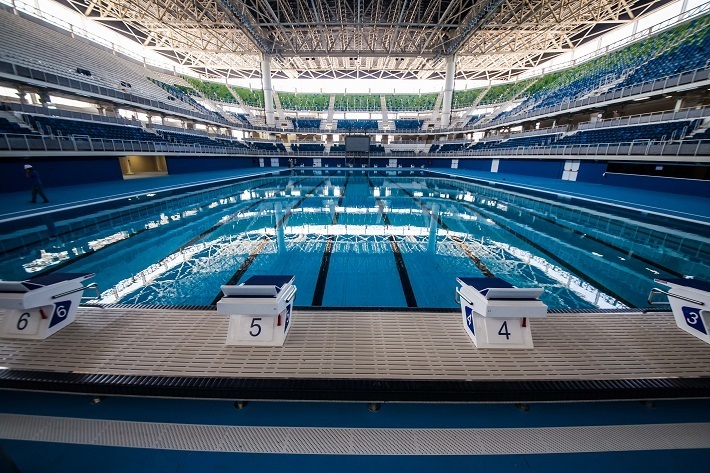 After hosting the Maria Lenk Trophy in April, which served as Brazil’s second Olympic qualifying meet, the Aquatic Stadium was closed for renovations that were found necessary during the competition.  Maria Lenk, which served as a test event for the facility, was closed to the public, allowing only athletes, coaches, officials, and athletes’ families to attend.

Air quality and the lack of a forced-air ventilation system was the most common complaint during the competition.  The Aquatics Stadium was built with no air conditioning system, relying instead on “natural ventilation” to circulate fresh air throughout the pool and stands.  Rodrigo Garcia, Rio 2016 sports director, told Globosport that a forced air ventilation system would not be necessary as temperatures outside will be much different in August than they were in April, but both FINA and the Brazilian Swimming Federation have requested that fans be installed inside the natatorium.

Inside of Olympic Aquatics Stadium Courtesy of Rio 2016

Ricardo Prado, general supervisor of all water sports during the Games, was present during the FINA inspection, though neither party has commented yet whether the requested ventilation updates were made.  The Olympic Games will be the first event hosted at the Olympic Park Aquatic Stadium that is open to the public.

In addition to the renovations in the natatorium, the outdoor warm-up pool has been covered by a tent to keep out mosquitos, which were cited as a problem during the Maria Lenk Trophy.  Before the Games begin in August the warm-up pool will also feature an air conditioning system.

Is there still enough time to do a GoFundMe page for this?

No ventilation? Its gonna be a disaster, like everything else in South America.

I was thinking the same thing!!! Can’t believe there is no air conditioning??

It may need some sort of fan system to force air ventilation, but it certainly doesn’t need air conditioning.

To be fair, the pool for the ’96 games was similar to the Rio pool with its outdoor set-up. I think Atlanta in July is also hotter than Rio is in August. I think people are just trying to find more things to complain about

I disagree. Although I see your point about finding things to complain about, this is the Olympic Games. Little things like a lack of ventilation or protection from the elements (or little beasties) should not be an issue nor treated lightly. The best athletes in the world spent their lifetimes for this one chance. They deserve the best facilities to compete in. I am sorry to say that the pool in Rio isn’t quite at that standard. Rio dropped the ball on this one.

Fair enough. I still think it is a great facility and don’t see ventilation being an issue. I could understand concerns about the warm down pool and it sounds like that has been remedied with the tent and air conditioning.

Now it is all about doing the best with what you have been given. If the athletes have any complaints, they will probably keep it to themselves as they have one reason for being there and that is to do their best and/or to win.

London and Beijing spoiled us with their beautiful state of the art swim facilities. I look at the Rio pool and think not much.

Air conditioning and ventilation isnt exactly state of the art …

I don’t understand why mosquitos are/were a concern at the warmup pool, and not at the open air competition pool???

Since it is winter in the southern hemisphere, there has been a suggestion that Zika-carrying mosquitoes will not be as active as in the summer months. I’ve heard it said that August in Rio is probably similar to Jacksonville, FL, in February.

As for the competition pool: it is a temporary Myrtha Pool. The seating bowl around it has 11k+ seats. A roof is supported overhead, so that there will be no sun on the pool or spectators. The roof is supported by four giant columns (that block some sightlines). It looks like the gap between the top seats and the roof is 10-15 feet. I think the assumption is that the weather is pretty good at that time of… Read more »

Check how close the equator is to Rio. It is not winter. The Zika is there 24 hrs a day in less they are wearing Hazmad suits.

It is winter and the average temperatures at that time of the year in Rio are 66 F for the low and 78 F for the high (in the late afternoon). I think it will be fine.

It’s Winter!
And the weather is not warm.Some days we have 10C(50F) of minimum down here.The mosquitoes reproduction are severely affected by that.At night(the hour of finals) is very cold…