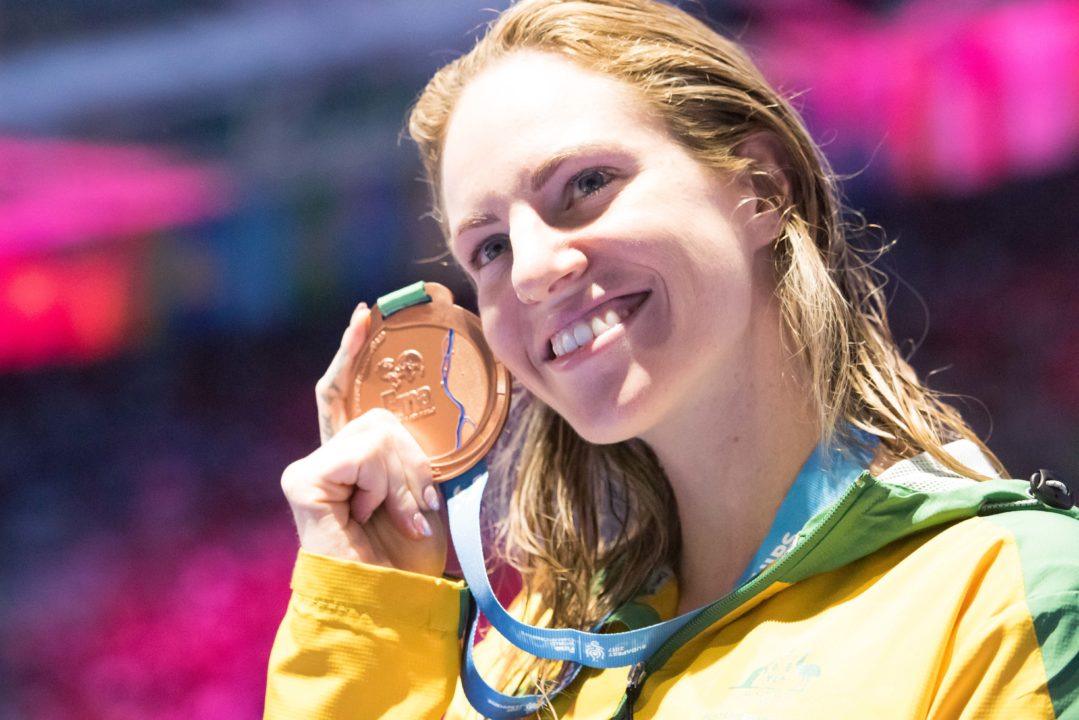 The 28-year-old Australian revealed she's dealt with an eating disorder for over two years in an Instagram post on Friday morning. Archive photo via Mike Lewis/Ola Vista Photography

Five-time Olympic medalist Emily Seebohm revealed that she’s been dealing with an eating disorder for “over two years” in an Instagram post on Friday.

The 28-year-old Australian, who was a fixture on the Energy Standard club during the recent International Swimming League season, detailed some of the things she has experienced, including being told that in order to swim faster, she needed to lose weight.

“I’ve binged, purged and taken laxatives,” Seebohm wrote in the heartfelt post. “I’ve counted calories, skipped meals and constantly weighed myself. I’ve been embarrassed to be in my togs. I have judged my body every time I have been in front of a mirror.

“I’ve been told that the only way I can swim faster is by losing weight and I have believed it.”

The Adelaide, South Australia native vows to “be braver” for herself in 2021, and hopes by sharing her story she can help others going through a similar situation.

“This year I’m going to be braver for myself,” she said. “To give my body the love it deserves and to start I needed to be honest to everyone including myself. I’m not asking for anything but hoping that I can help someone who could be feeling the same. I got this butterfly tattoo late last year as the butterfly foundation helps people struggling with eating disorders and I wanted a reminder that I can do this!”

Seebohm is a three-time Olympian for Australia, winning a gold medal in her debut at the 2008 Games in the women’s 400 medley relay at just 16 years of age. She went on to win three medals in 2012, including a gold in the 400 free relay and an individual silver in the 100 backstroke, and then added a fifth Olympic medal (silver) in the 400 medley relay in 2016.

In addition to her Olympic success, Seebohm is also a five-time Long Course World Champion, including winning the women’s 100 and 200 backstroke events in 2015 and successfully defending her 200 title in 2017.

After winning the inaugural ISL championship with Energy Standard in 2019, Seebohm helped the club to a runner-up finish in November inside the Budapest bubble, scoring 162.0 points for the season which ranked 14th among women and 25th overall.

You will never be any more , any better, any slimmer, than you were at 26. Your social media has topped out.

Appreciate those years because they ain’t coming back. After that we are all just flattening the curve , trying not to over burden every system incl graveyards.

Just a thought, maybe, just maybe, she “wants” to keep swimming… Huh wow what a concept…a professional athlete that may or may not have seen their best years go by, but is still an elite athlete and can contribute to her National team or ISL team in many ways if not with world recs or golds. ISL could/will be awesome for the non-#1s but still excellent swimmers to extend their careers and be role players to various teams. Not unlike essentially every other pro League…

Do you even know about life as an athlete with an eating disorder? Based on your comments, I would assume, no. As a former national champion and 7 year national teamer in my sport, I believe I can attest to and speak from experience. I developed an eating disorder at age 11 due to coaches forced weigh-ins, extra hours of plyo metrics if a girl gained a pound, and the constant nagging of “you’re fat, once you go over this amount you’ll never amount to anything in the sport…” I was in middle school, was almost 5ft tall, and weighed 52 pounds. I was constantly sick, had never-ending bladder and kidney infections, battled anemia, and the list of injuries (specifically… Read more »

I was a gymnastic judge . Frankly not many girls can get beyond level 5 . I think these sports are a case of certainly start them but acknowledge when the body line & skill factor are beyond you . Move on .

Emily decided to take on pole dancing about 3-4 years ago. This pursuit is a highly competive one as a pole dancer in a pub or even worse with the women in the studio. Posting on Insta takes it to another level. Seems to me a self goal.

Go o d luck with your life & thanks for responding .

You need to go away and take all of your ridiculous comments with you. Sure hope you are no child’s parent. I’m making sure I DO show this article to my daughter. You obviously have never experienced the pressures that many female swimmers face- especially from insensitive male coaches. And by the way, I myself weigh less than I did at 26. Bet you don’t. I also happen to be a psychologist.

Agreed. Corn Pop is a troll and should be banned.

As a member of QAS , Emily has had access to top psychology , physiology & nutritional services since 2006. I doubt there is anything you can tell her.

And yes 26 is peak physiology for a woman. Males might make 30 but its downhill from there on . That includes you.

Surely you have no idea about plenty of swimmers and other athletes who have won Olympic medals, WC medals post the age of 30.

You need to get a life mate, Emily has achieved more in sport and life than you ever will!

what are you a redditor?

The above is not going to touch Kaylee’s $$$ value next year .

emily has a good 200 im, an event which is very open behind kaylee in australia

W200IM, like its 400 counterpart, has been somewhat of a competitive wasteland since Rice, and later, Coutts departed the scene. McKeown’s recent times suggests a return to competitiveness but with the major IF factor being whether she will add one/both to her Tokyo program. Seebohm’s 200IM PB is comfortably inside the AUS QT but it was several years back. The QT is still do-able for her albeit no “done deal”. The event IS, probably, still her best avenue for Tokyo selection. I think she is most likely shut out of the 100back by McKeown and Atherton with O’Callaghan the potential “sniper”. The 2nd 200back spot is still plausible as Atherton is not yet as “proven” over the distance LCM as… Read more »

Let this be the last reply to this. This ignorance should not be given the attention it wants.

Everyone who thinks like corn pop, and corn pop, should ve removed from the sport. Comments should be removed by swimswam too,

LMAO Emily is just trying to rain on Kaylee’s parade. Her problems are a smokescreen for the green monster . Ppl like you feed it & encourage victimhood .

I’m sorry to hear about this and glad Emily’s getting the help she needs. I hope her coaches didn’t push her into this eating disorder. There must be a lot of pressure in being a swimming star in Australia and those athletes really live in a fishbowl.

Going back and listening to Emily’s interview on 24th with Coleman, she began to open up about this. Would be great to have a follow up interview that really engages with her, not just pause, yeah, for sure.

Brave to admit, and hopefully with things out in the open she can continue to recover and swim well.