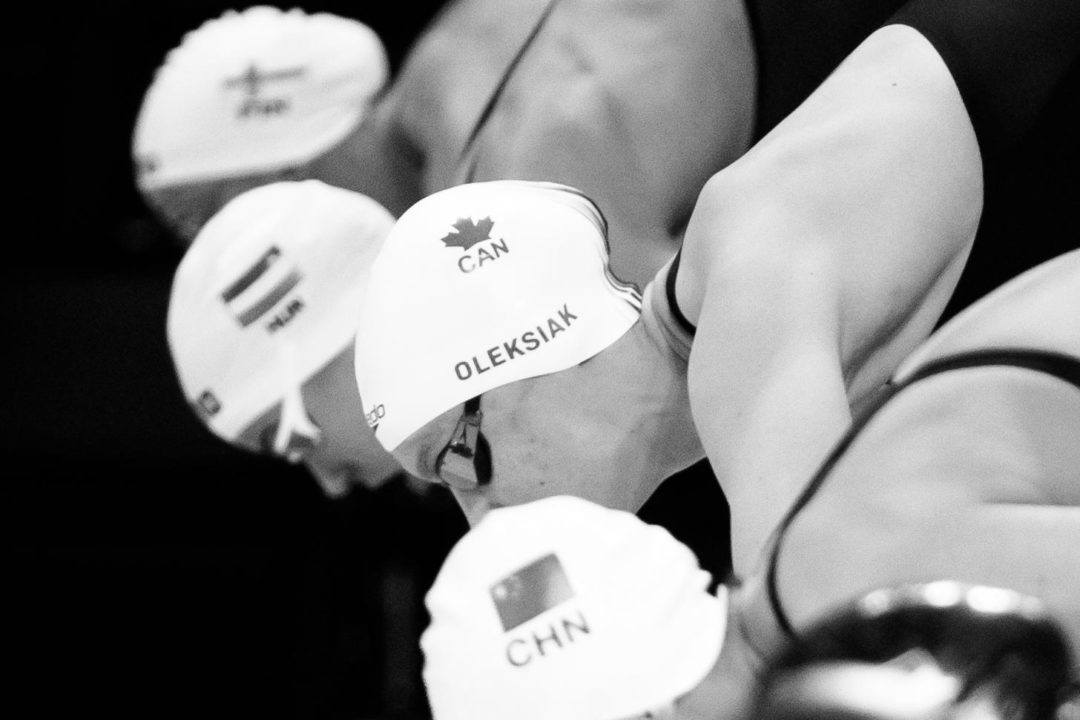 Penny Oleksiak has scratched out of the 200 free on day 1 of the Canadian Swimming Trials. Archive photo via Mike Lewis/Ola Vista Photography

Four-time Olympic medalist Penny Oleksiak has scratched out of the women’s 200 free on day 1 of the Canadian World Trials in Victoria, choosing to swim the 50 fly instead.

Oleksiak was seeded 2nd behind Katerine Savard with her best time of 1:57.59 from the 2016 Trials, but had to be considered the pre-race favorite after her 1:54.94 split on the 800 free relay in Rio. Savard was also the top seed in the 50 fly, but has scratched that event to focus on the 200 free.

There were five other scratches from top ten seeds. #3 seed Mary-Sophie Harvey scratched the women’s 200 breast, #10 seed Emma Ball is out of the women’s 50 fly, and Josh Zakala (2nd), Alexander Pratt (3rd) and Brian Palaschuk (4th) all scratched out of the men’s 800 free.

how does the Canadian WC selection process work? Does it mean that Oleksiak won’t compete at 200free at all in Budapest? Neither individually nor in relay?

Not individually anymore, but she can swim the relay. If the top four girls in the final go fast enough to all qualify for the relay, they could still put Oleksiak in for the final of the relay.

Thanks.
What a petty? Who is going to challenge Ledecky at 200 free. The only distance where there is some chance to dethrone her. Nobody left but 28 yo Pellegrini.

I think that Sjostrom won’t change her decision to not compete at 200 free. She had enough of such a “joy” in Rio. She has a great rare opportunity to win all sprint races in fly and free. That will be unprecedented feat. She won’t risk it for very tough and doubtful win at 200 free. Comerford was 1:59 in March. At the same meet she went under 54 at 100 free. Is she able to drop 5sec ? (It is a rhetoric question. No need to answer)

Comerford might be a serious surprise comes the summer ……

American 4×200 relay has two 1:56 low vacancies.
Will Mallory participate at PSS next week? Is 200 free in her program?

I doubt Oleksiak would be ready this year to pose any sort of challenge to ledecky in the 200. She’s had somebody injury problems since rio.

It’s true but she is the only elite sprinter beside Sarah Sjostrom, who has strong second half at 100 and is capable to extend sprint up to 150 and not to die after last turn at 200. If Katie Ledecky could expect some challenger on the rise then it could be only Penny. 200 is too much for McKeon to expect her to progress beyond shown in Rio. And nobody else are capable to dive under 1:55. Maybe other Canadian youngsters surprise us. We will see it tomorrow.

Good if she does it. After six or so years of being consistently the most intriguing and open race of the meet we don’t want this discipline to get back in stagnation. Unless Katie Ledecky is up to the Pellegrini’s world record (that may not be the case) the 200 free race can get boring.

Surprising for Penny to drop the 200 over the 50. The 50 is not a selection event, guess she’s just using it as a first swim to get comfortable?

Yes, I think so.
Too many physical troubles hampered her preparation to begin in this season “the 200-free project” (or the even more futuristic 200 fly-project)
I’m curious to se how she will be swimming in her real races at this trials, i.e. the 100 fly and free.

Taylor Ruck, “victim of OT”, 12 months later is the favorite for individual 200 free. Kayla Sanchez the most improved swimmer so far in the season.

Since Oleksiak swam the 200m free at the 2015 Trials (finishing 2nd) and dropped a 1:54.94 relay split in Rio, I would say that the 200m free project appears well-advanced. I agree that her injuries may have been a factor in this decision to scratch the 200m free. It will be interesting to see if she elects to swim the 200m fly -as noted in previous SwimSwam articles, this is a rare women’s event with nobody in the field having a FINA-A standard. My personal theory …. with 4 spots up for grabs in the 200m free, Oleksiak scratching gives a better chance for her training partners – Rebecca Smith and Kayla Sanchez – to punch their tickets to Budapest… Read more »

There’s also the fact that the 50m butterfly is right before the 200m freestyle. Both Oleksiak and Savard would have needed to pick one or the other, with not enough recovery time between races, even in the heats.

This may be Taylor Ruck’s breakout senior meet (long course) if she’s healthy. Excited to see what she can do– a very versatile swimmer.