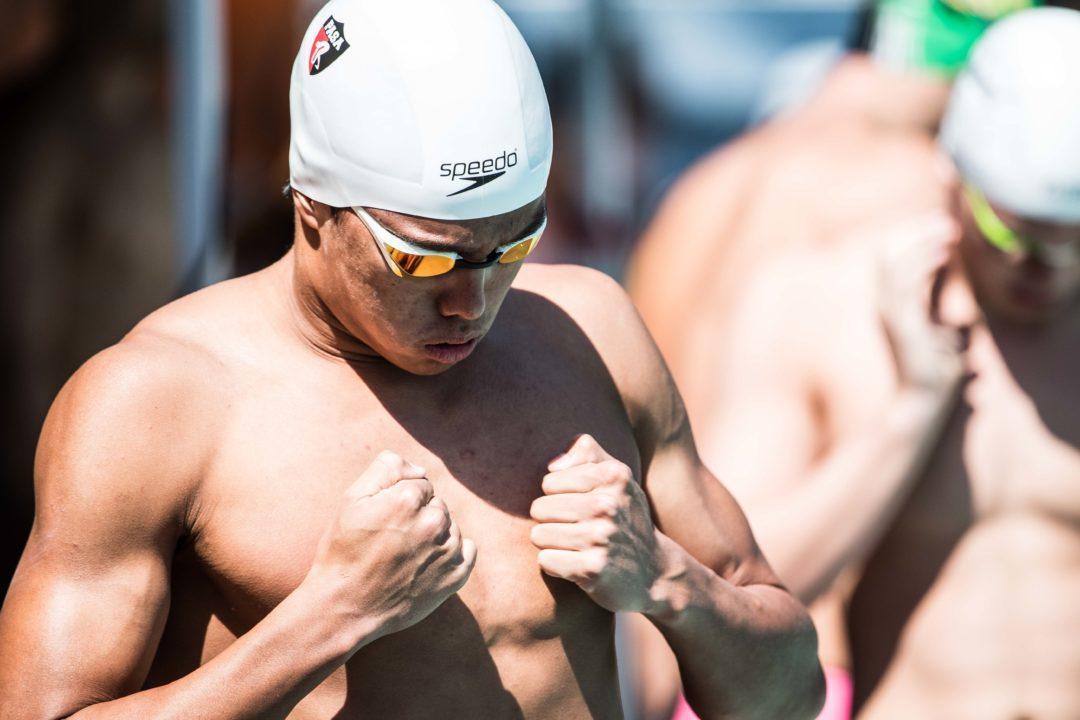 Former top-20 recruit in the class of 2016 Albert Gwo is set to join Columbia University after sitting out what would have been his freshman year in the NCAA. Archive photo via Mike Lewis/Ola Vista Photography

Former top-20 recruit in the class of 2016 Albert Gwo is set to join Columbia University after sitting out what would have been his freshman year in the NCAA.

Gwo originally committed to California back in the summer of 2015. But he never showed up on the Cal roster this past season with the rest of that high school class of 2016 recruiting class. Now CollegeSwimming.com reports on Twitter that Gwo has committed to Columbia:

Gwo was one of the only 19-second sprinters in his recruiting class, holding a 19.90 best time in the 50 free. His top times:

Those sprint freestyle times come from high school. Gwo did do some swimming at the club level this year while taking his gap year between high school and college. His lifetime-best in the 100 fly comes from this past February. He’s also recently been 20.0 in the 50 free and 44.4 in the 100 free.

Gwo will jump all the way across the country to compete for Columbia. He comes from Palo Alto Stanford Aquatics and Los Altos High School in California. His lifetime-bests would have placed him 3rd in the 50, 6th in the 100 free and 17th in the 100 fly at this year’s Ivy League Championships.

He was enrolled at Cal but withdrew before the swim season started. Must’ve really hated it.

He came for one practice and left

OOO are we speculating about things we don’t know about! Count me in!

Not sure why you’re being downvoted, you made a pretty objective observation

Good for him. Found the best fit for him.

Well, we will miss him at Berkeley as he is from the SF Bay Area (Palo Alto), so we will have to go with the following returning 50/100 free swimmers coming back for next season: Michael Jensen, Matt Josa, Justin Lynch, Kyle Coan, Pawel Sendyk, Quah Wen Zhang. And incoming frosh Bryce Mefford and Ryan Hoffer. Should be OK

According to College Swimming Cal is getting three #1 swimmers- Hoffer, Daniel Carr,Mefford and the #9 ranked swimmer Sean Grieshop. Interesting that the other 6 in the top 10 are all going to separate schools. Thats an entirely interesting discussion by itself and how it relates to intra conference competition.

You are correct JJB about a discussion needed when you see Cal, Texas, USC and Stanford et al “load up” in the Men’s ratings and have you looked at Stanford’s Women’s recruiting these past couple of years? J don’t see how they can miss on 3 more straight NCAA titles.