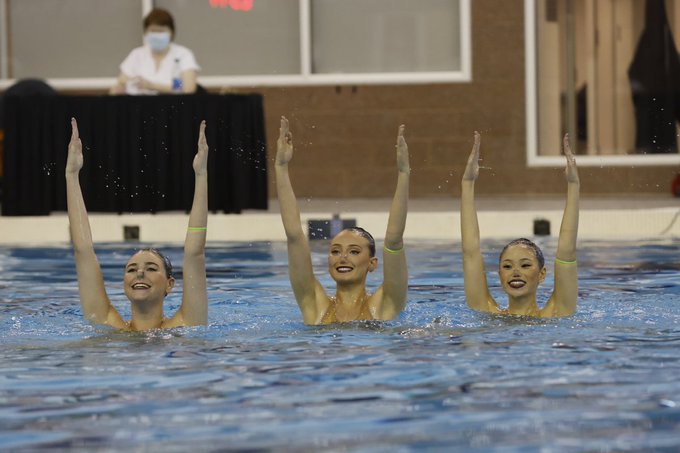 In its final competition before Nationals, the OSU synchronized swimming team won each category at the 2022 North Regionals to remain unbeaten on the year. Archive photo via @OSUsynchro/Twitter

COLUMBUS, Ohio – In its final competition before U.S. Collegiate Nationals, the Ohio State synchronized (artistic) swimming team won each category at the 2022 North Regionals to remain unbeaten on the year. In addition, the team qualified all its routines for this year’s national championship meet.

Competing 10 routines at the meet held in Ann Arbor, Mich., the Buckeyes displayed powerful, athletic swims for season-best marks in all routines at the meet. The team also swept the A and B figures with 21 total student-athletes competing in the technical portion of the meet.

The Buckeyes started off the day with wins in both the A and B technical competition. Freshman Ruby Remati won the A figures competition with a score of 82.2116 among the all-Ohio State field. Junior Trinity Patton led the way with a score of 74.22456 in the B figures as the Buckeyes took the top nine finishes.

Nikki Dzurko earned her fourth solo win of the year with a season-high score of 88.2667. She picked up her first career regional championship victory for the Buckeyes in the category after taking second in 2018.

The veteran duo of Dzurko and Laila Huric picked up their third win of the year in the duet category with a season-best score of 87.4000. Emily Armstrong and Ruby Remati followed close behind, scoring an 87.2000 in their first regional championship meet.

Armstrong, Remati and Cassie Neeley combined to put together a strong, winning trio routine, earning their best score of the year with an 84.9000 on Sunday. Coming in second was the Buckeye trio of Hannah Heffernan, Paige Hopper and Rachel Jager (83.6667).

The Buckeyes set their sights on the 2022 U.S. Collegiate National Championships set for March 25-7 in Columbus at the McCorkle Aquatic Pavilion. This year’s meet marks the eighth time Ohio State will host the national championship meet and first time since 2017.