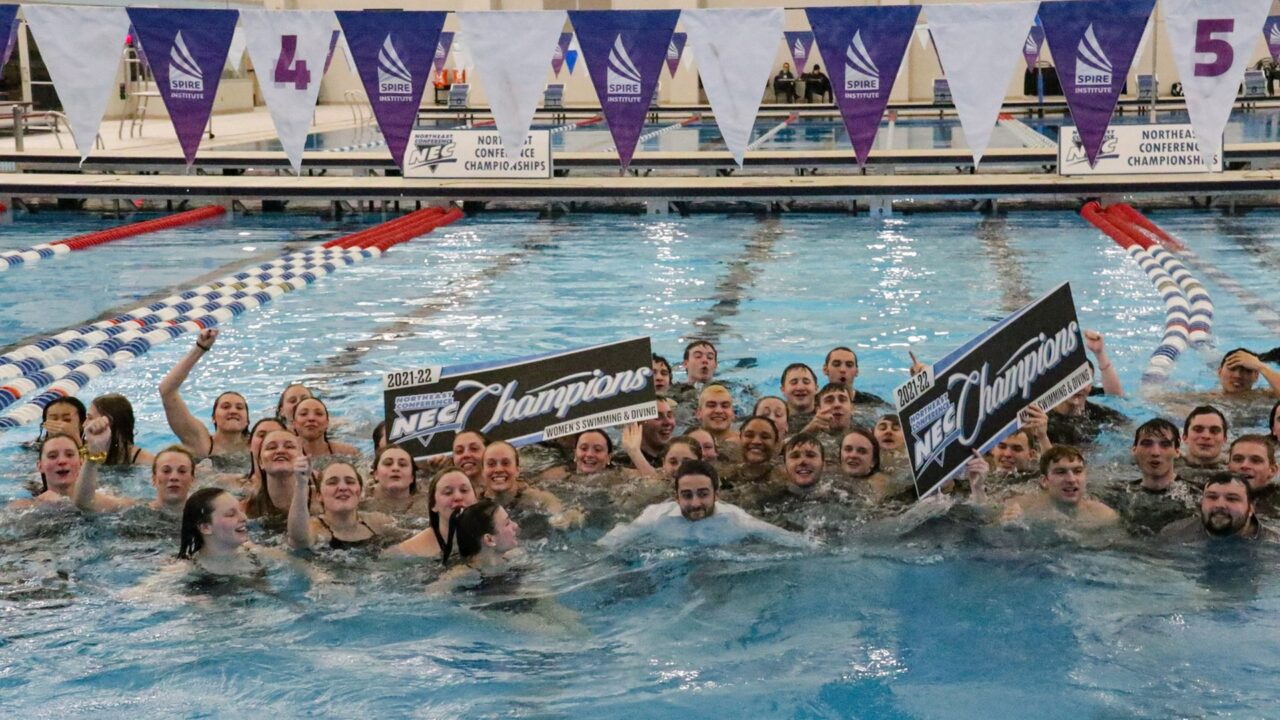 NEC Rookie of the Meet

Bryant made history last night, becoming the first NEC program to win 5-consecutive team titles. It didn’t come easily, however, as the Bulldogs entered the final day of the meet trailing Central Connecticut State by 23 points.

It didn’t take Bryant long to take the lead, thanks to a massive team effort in the first event of the finals session: the 1650 free. Bulldogs grabbed the top 3 spots, plus 8th and 13th to outscore CCSU by 49 points in the event. They were led by Samantha Grenon, who swam a 17:02.61 to touch first by a comfortable 8-second margin. Natalia Kuipers and Paige Edwards were next in, clocking times of 17:10.73 and 17:10.82 respectively.

CCSU would severely cut into Bryant’s lead following the next event, the 100 free. Jeannette King, who was named Outstanding Swimmer for her efforts this weekend, won the event in 49.83, touching first by over a second.

Bryant was back on top in the 200 back, where Reagan Lord put together a massive victory, clocking a 1:57.53. She was the fastest swimmer in the field by 4 seconds. Additionally, Lord was faster in prelims, swimming a 1:56.67, which set a new conference record.

Wagner grabbed a win in the 200 breast, where Ellie Eastwood swam a 2:17.17, establishing an early lead and holding on through the finish. Bryant’s Kyriana Chambo took women’s 3-meter diving, racking up 245.50 points to win by a comfortable margin.

NEC Rookie of the Meet

Bryant also won the men’s NEC title, repeating as champions after a dominant team performance throughout the weekend. They got off to a roaring start on Saturday, with freshman Leo Luna winning the 1650 free, and downing the NEC meet record in the process. Luna swam a 15:47.56, taking over the lead from Howard’s Luke-Kennedy Thompson on the back half of the race.

The meet records kept falling, as the next event was taken by Saint Francis College’s Daniel Matheus Santos in 44.33. It was an incredibly tight finish, as Howard’s Mark-Anthony Beckles and Bryant’s Conner Lofstrom tied for 2nd in 44.40. All 3 were under the meet record of 45.13, which was set last year.

Mount Saint Mary’s got in on the action as well, picking up an event title in the 200 back. Jason Fitch put together a strong final 50 to push himself into the lead towards the finish. He swam a 1:45.86.

Bryant was back on top in the 200 breast, where Fu Kang Wong, who won Outstanding Swimmer of the Meet, swam a 1:59.31 to claim victory. Wong swam the fastest split in the field on all 4 50s, establishing the lead out the gates, and continuing to grow it as the race progressed.