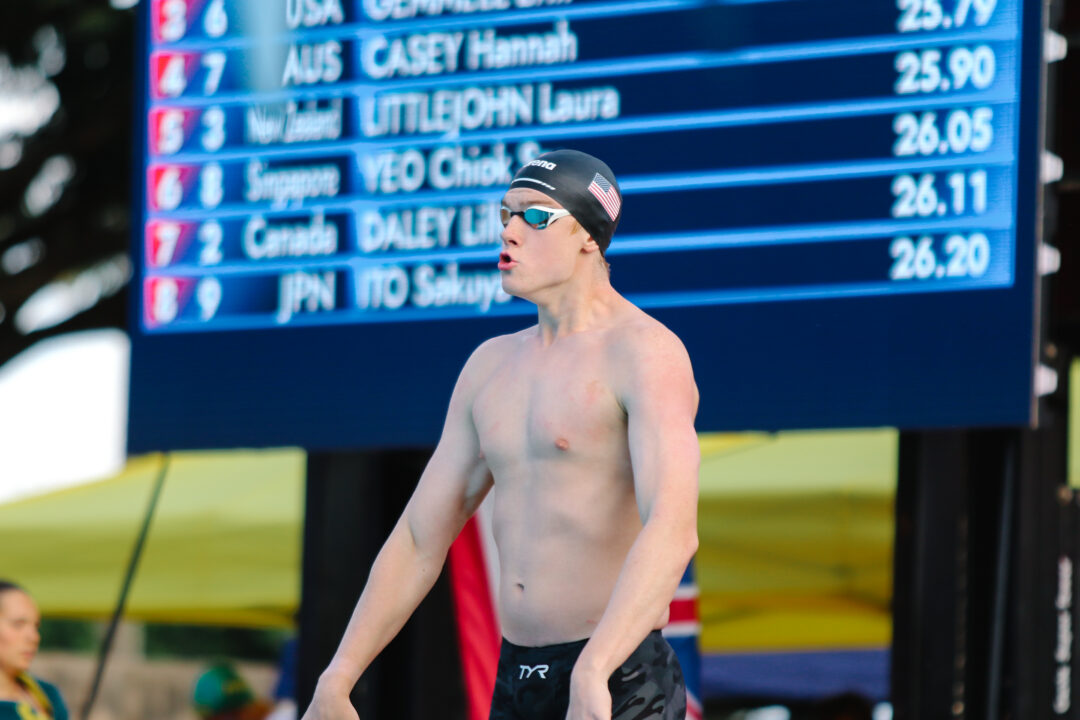 Hudson Williams, a member of the US team for Junior Pan Pacs, is the defending Ohio Division I State Champion in the 50 free. Archive photo via Jon Reiter

The Ohio High School Athletics Association (OHSAA) has expanded the number of State Championship qualifiers in individual events from 24 to 32 for the upcoming high school championship meets. Relays will remain at 24 qualifiers.

The Ohio high school swimming and diving season runs from October 28, 2022 through the state championship meets, which will be held from February 21-25, 2023.

Ohio advances qualifiers through its post-season system based on placement and times in each tier rather than by season-long qualifying standards, which some states use.

Besides expanding the number of qualifiers to the state meet, the state has also expanded to 32 qualifiers in individual events from the sectional meets to the district meets.

After that, the next 20 best times swum in district championship meets per individual event, and 16 per relay event, are invited as at-large births. The 32 divers are chosen based on a calculation of participation levels from each district meet.

This hybrid system, which advances swimmers based on a combination of placement and time, is used in several states, including Texas. That system has a few advantages: it keeps focus on the high school post-season, which can create parity as compared to allowing the best swimmers to qualify early in the year and coast through regional sub-state meets, which we see in some parts of the country.

It also balances representation from different parts of the state where swimming might not be as well-developed while ensuring that teams from more competitive areas aren’t substantially disadvantaged by the depth of their districts.

Kate Barnett, a spokesperson for OHSAA, says that the recommendation to expand the fields came from the state’s coaches’ association and member schools, which is true with most changes to OHSAA regulations.

“The expansion of 32 individual qualifiers for swimming and diving is a positive change for the sport and will allow more participation opportunities for swimmers and divers to compete at the state tournament,” she said.

The Ohio High School Championship meets are held at the C.T. Branin Natatorium in Canton, Ohio. The venue is part of a large sporting complex that includes the Pro Football Hall of Fame.

Since this article somehow ended up in the NCAA DIII category of this website, I feel obligated to offer my thoughts on this new policy from the OHSAA, being a D3 Athlete-Student myself. Rumor says that all 32 qualifiers for each individual event are preparing to commit to Case Western Reserve University, after a strong push from Head Coach Douglas Milliken. His new innovative recruiting strategy, propagated by first year computer science student John Drumm, enables him to communicate with every CollegeSwimming.com user at once, allowing for every single OHSAA state athlete to be in talks with the greatest coaching staff in the country. Expect a flood of commitments coming soon, as the Spartans turn their eyes toward the 2024… Read more »

Can confirm! My son swims for St. Xavier high school near Cincinnati. He, and all his buddies, have received these communications from head coach Doug Milliken. In fact, I’ve heard whispers that my little guy and ALLL his buddies (the entire senior class… Men and Women) are highly considering committing to CWRU so they can spend 4 more years together as a team (and see their great friend, William Froass). Doug, along with assistant coach Elizabeth Levy, have certainly ‘Changed the Game,’ (as the youngsters say) when it comes to recruiting!