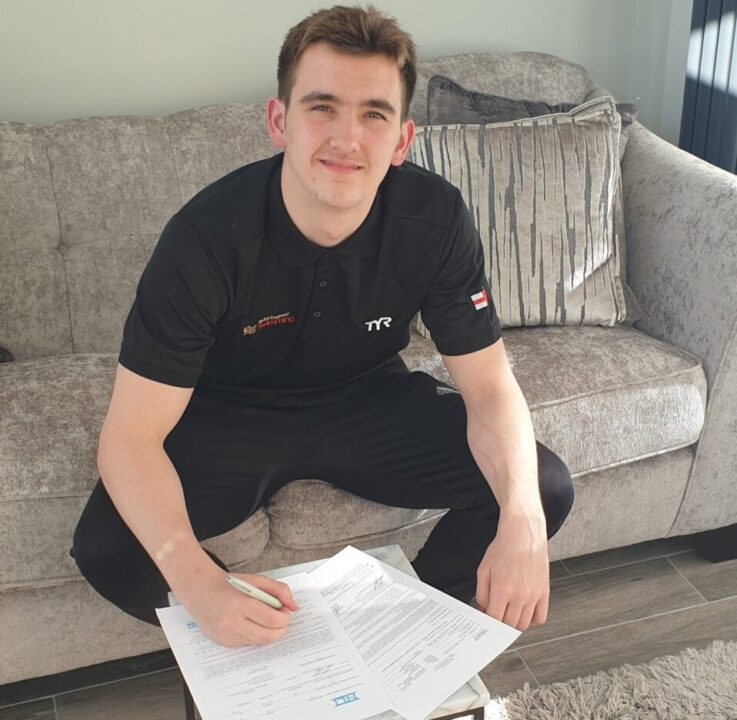 Nicholson is the fastest 18-year-old 200 backstroker in Great Britain this year. At Oakland, he has conference finalist potential in at least five events. Current photo via Andrew Nicholson

Great Britain’s Harry Nicholson has announced his verbal commitment to Oakland University for the fall of 2022.

“After speaking to coaches and seeing the facilities as well as programme there was nothing to think about and I’m looking so forward to my studying and progression over the coming years along with becoming a golden grizzly.”

He trains with Newcastle Swim Team and will have a long trip to Rochester Hills, Michigan from his hometown of Sunderland. He just graduated from Durham Sixth Form United Kingdom. In April, he posted lifetime best times in the 100 meter backstroke and 200 meter backstroke at the City of Sunderland ASC National Qualifier meet. His new long course 200 back time would have placed 6th at the 2022 European Junior Championships in Romania. No British swimmers made the final in that event.

Nicholson is now ranked #1 out of the fastest British 18-year-olds in the 200 back this year, ahead of Kaden Edwards and Jonny Marshall who represented Great Britain at the recent European Junior Championships (Edwards competed in the 400 IM.)

This season, Nicholson is ranked #3 out of the fastest British 18-year-olds in the 100 back behind only Marshall and Robbie Hemmings. Marshall, who won bronze in this event at the recent European Junior Championships, will be swimming for Florida in the fall of 2023. Hemmings was a semifinalist in the 200 back in Romania.

While Nicholson has not swum short course yards, his converted long course times (49.18/1:46.43) would have placed him 6th in both the 100 and 200 back at the 2022 Horizon League Conference Championships. This would have made him the Golden Grizzlies’ second-fastest swimmer in both events since rising junior Jack Wike placed 5th in the 100 and rising senior Marko Khotynetskyi won the 200 back.

His converted times also would have placed him in the 100 free, 200 free, and 100 fly finals at last season’s conference championships in 7th place (44.70), 9th place (1:40.14), and 14th place (50.15), respectively. He would have been Oakland’s third-fastest swimmer in the 100 free and 100 fly, but the Golden Grizzlies had a deep 200 free group last season, placing 1,2,3,4 in the ‘A’ final. Nicholson would have been their 5th-fastest swimmer. Now that Mack Flowers, who placed 3rd in the 100 fly last season, has graduated Nicholson would be the second-fastest in this event.

Nicholson is one of two British commits in Oakland’s class of 2022 verbal commitments alongside James Hart who trains with Plymouth Leander. They also join Charles Brown, Micah Scheffer, James Hart, Sofus Balladone, and Kieron Bezuidenhout, in the Golden Grizzlies’ class of 2022.

Backstroke conversions are no longer at all accurate due to underwaters