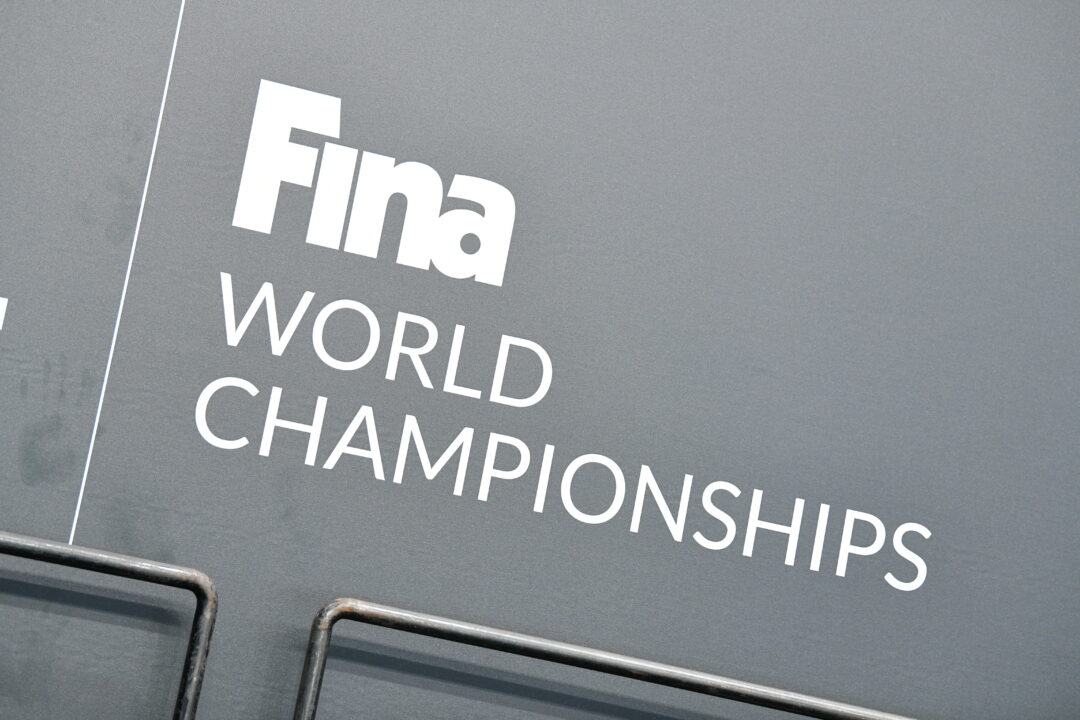 The competition will run from February 2-18, 2024 in the Qatari capital, ending some 159 days before the opening of the Paris Olympic Games. Stock photo via Fabio Cetti

The competition dates for the 2024 World Aquatics Championships have been announced.

FINA revealed Tuesday that the competition will run from February 2-18, 2024 in Doha, Qatar, ending some 159 days before the opening of the Paris Olympic Games.

The World Championships in Doha were originally slated to take place in November 2023—at the time the latest the event has ever been contested in the calendar year—but was pushed back to early 2024 after the 2022 championships in Fukuoka, Japan was postponed to 2023 due to COVID concerns.

This will be Doha’s first time hosting Long Course Worlds, though the Qatari capital has held several FINA competitions over the years, including the 2014 Short Course World Championships, nine editions of the FINA World Cup and four Marathon Swim World Series events.

While not mentioned in FINA’s announcement, the venue was expected to have temporary seating for 10,000 spectators.

Diving will take place at the nearby Hamad Aquatic Centre, while open water and high diving—which was not contested in Budapest but will be in Doha—will be held around the Museum of Islamic Art, which is built on an island off an artificial projecting peninsula near Dhow Harbor.

“At FINA, we are committed to giving athletes additional opportunities to compete on the championship stage,” said FINA President Husain Al-Musallam.

“Today’s announcement is a testament to this. We are extremely fortunate to have an event host in Doha that shares our passion for aquatics with the willingness and flexibility to organize this prestigious event to the benefit of aquatics athletes everywhere.”

At the time of the announcement that the 2023 Worlds in Doha would take place in November, one of the primary reactions from fans—and presumably athletes, coaches, etc.—was how close the event would be to the Paris Olympic Games.

Now the event is significantly closer to Paris. November meant the Olympics would be eight or nine months away, now we know it will be less than five and a half (159 days from the conclusion on Feb. 18 to the opening of the Games on July 26).

February is also right in the thick of the NCAA postseason, surely contrasting with conference championship meets, meaning the vast majority of college swimmers will not be attending.

One of the primary reasons why the competition was originally scheduled to run in November (rather than the normal summer timeslot) was due to the weather, especially for the open water athletes.

The average water temperature in Doha in February is 66.9°F, which is actually on the colder side compared to somewhere like Budapest in June (average of 71). In November, water temp typically ranges between 75 and 77°F in Doha, while it can get up into the 90s in the summer.

The weather itself in February falls between 71 and 76°F.

The frequency of WC meets really diminishes the impact and the status of the event. The original plan, after the initial ’73 and ’75 events, was to have every 4 years beginning in ’78, to run in the even years opposite of Olympic years. I can’t see ever having an entire A-list meet with all the key players when they’re scheduled so frequently. There’ll always be some other competing event.

This is a really poor decision, it is more about money, and not about athletes. It really needs to be considered further. Moving the Championships to 2025 starts to be a sounder decision.

Whoops just got confused with the dates lol

It is kind of unnecessary to have a worlds that year IMO. College swimmers will likely not attend, pros will be training for trials, it may just be a meet dominated by junior athletes… idk seems a bit weird to me

FINA thought they had seen mass non-attendees at these past championships.

And the winner is Claire Tuggle!

Klete Keller will show up at this meet and medal in the 400m free.