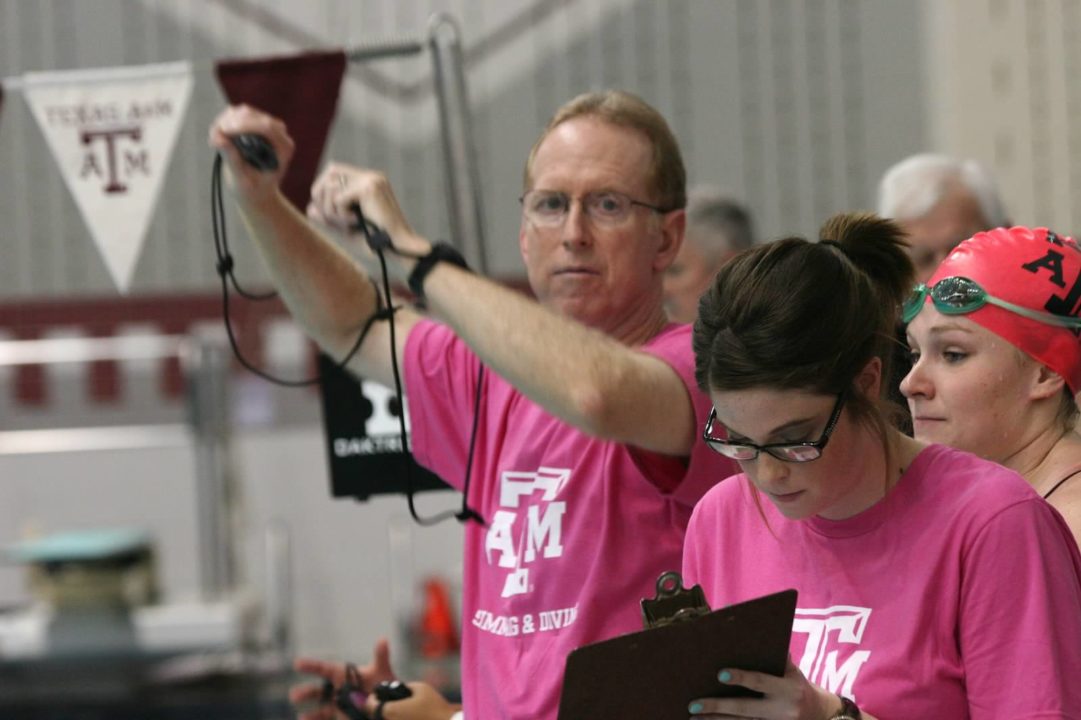 Steve Bultman's Texas A&M women qualified 16 women for the 2015 NCAA Championships - but many, many fewer teams will be at this year's meet than last year. Current photo via Liz Dittmer

Only 63 teams earned invitations to swim individual events at the 2015 women’s NCAA Swimming & Diving Championship meet, which is the lowest since the NCAA changed the way it selects swimmers following the 2011-2012 season.

The new qualifying rules meant, among other things, that swimmers who only qualified for relays didn’t automatically get individual invites as well. This meant that the same 281 qualifying spots would be divided up among individual qualifiers (relay-only swimmers don’t count against that cap, which is why institutes have to pay for their travel themselves).

Initially, as was expected, this led to an immediate expansion of the number of teams who qualified swimmers for the NCAA Championships, and that expansion continued into the 2nd year under the new system.

But, this year, that took a sharp downturn to just 63 teams. That’s actually fewer than the year before the changes went into effect – in 2012, 64 teams sent swimmers to NCAA’s.

One might suspect that teams have adjusted to the new qualifying system – whereas previously, power teams could count on getting swimmers in to NCAA’s without much effort due to relays, now everyone has to be a little more focused for their mid-season invites and conference championship meets. That could be one reason why we’ve seen a shift back to a consolidation of power.

This is an interesting observation, and Braden notes, it’s difficult to come to any simple conclusion about what causes this trend without looking deeper. An even more dramatic concentration of power becomes apparent when you look at NCAA meet scoring each year. Typically, the aggregate scores of the top 5 to 7 schools is higher than the aggregate scoring of all the other 60 or so schools combined. I think this is because out of the 281 meet qualifiers, there are about 15-20 dominant “big gun” athletes that score big points in multiple individual events plus are huge difference makers on multiple relays. (A partial list from last year would be folks like Geer, MacLean, Margalis, Smoliga, Lee, DiRado, Franklin,… Read more »

Vote Up00Vote Down Reply
Sam I am

Another factor could be the last chance meets. Little schools with small swim team budgets cannot afford to fly 1 or 2 swimmers and a coach down to a last chance meet with the hopes of making it in under the line. Not saying it is a huge factor, but something that could be taken into consideration.

This shouldn’t come as a surprise at all. We’ve seen more and more of the top talent flocking to a small group of schools over the last 3 or 4 years.

As for whether it’s a good thing or a bad thing, I have no idea. The meet is clearly faster than its ever been. I don’t know if that’s just because USA Swimming in general is getting better or because the talent is finding each other and making each other better at the college level.