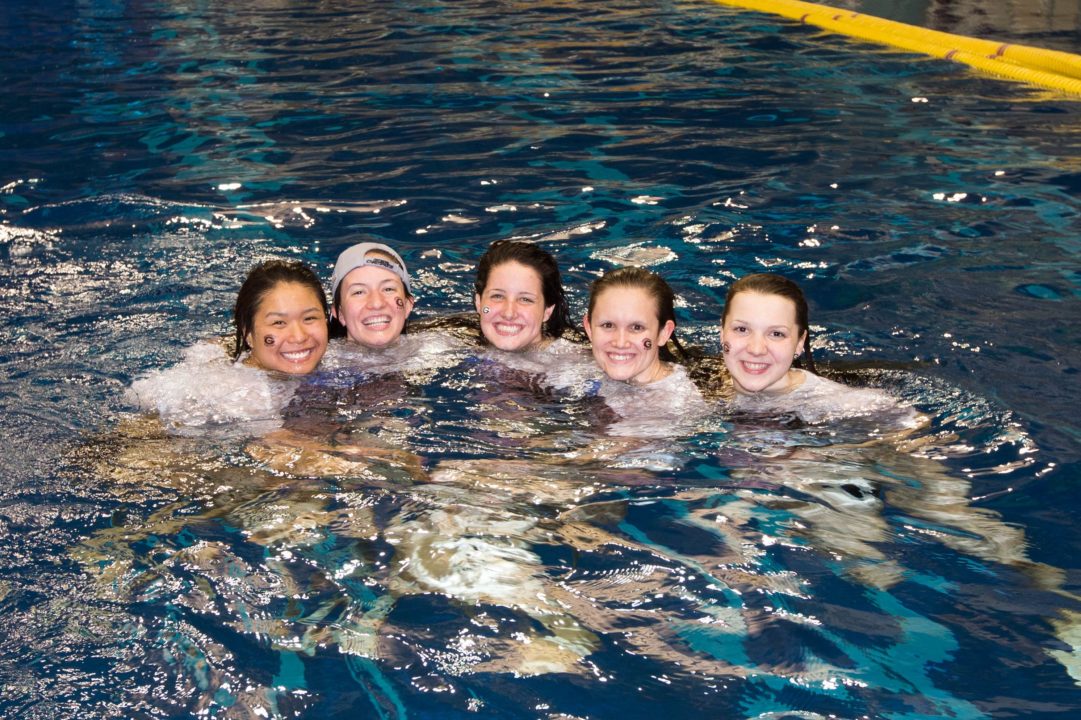 With divers yet to go, the Georgia women are the only team with a full roster of 18 athletes so far. Archive photo via Tim Binning/TheSwimPictures.com

The NCAA has released the official psych sheets for the 2015 NCAA Women’s championships, and Wagner College’s Bryee Nihipali, who we had as the first alternate in our analysis, has been invited to the field of 281.

That means that Wisconsin’s Maria Carlson is the only swimmer from the 39th-ranked line to not be invited to NCAA’s, and she is now the first alternate – who will await the results of zone diving to see if Georgia is forced to scratch a swimmer.

Note: the “rosters by team” only include events in which swimmers were invited to NCAA’s, not bonus events, which are all listed on the psych sheets.

Teams with at least 10 Invitees:

Last year I used the psych sheet to calculate points based on entry standings and correctly predicted a Georgia win. I haven’t done it this year, but a quick scan gives the edge to Cal. I realize that places change and teams and individuals can get hot with a perfect taper, but has anyone bothered to run the numbers

barkergk – here are the psych sheets scored, swimming only. http://swimswam.com/scoring-out-the-2015-ncaa-di-psych-sheet-womens-edition/

Wow! Thanks! How did I miss that?
Cal’s point spread explains how I was able to get the impression of their edge with just a cursory scan.

Gamble….. you are a little behind on Missy and Simone… Missy beat Simone in the 200 free in the PS
PAC12 Championships with both swimming in the 1:41s. Missy 1:41.03 I believe. Yes, it will be a great event. But there are a lot of great women 200 swimmers this year, but they should go 1-2.

Does the NCAA recognize the same altitude adjustments as USA swimming for purposes of making the qualifying times?

What about the relays? When are those determined?

Braden: Name teams on that one, if you can. I’d be interested. Teams with an A cut, but no individual invited.

dmswim – I saw your comment on that earlier, but can’t actually find “A” relay times for them. Are you sure they got them?

Isn’t there also a clause that teams can bring 4 relay only swimmers, but the school bears their expense? Or do they still have to have a minimum of one individual qualifier before that kicks in?

NM Coach – yes, they still have to have an individual qualifier if that kicks in.

confused because I know of a swimmer who’s right above the cut lines in 50/100 but not anywhere on the sheets — why would that be?

dee – if you told us the swimmer’s name specifically, then I could probably help you out.

If by “right above the cut line” you mean she just missed the cut off, then she wouldn’t be in this psych sheet. This psych sheet is ONLY for those who got invited. Anyone below the cut line (places 40-) in this document has been invited in other events, and these are their other events they got “B” cuts in.

ooooo cant wait for that 200 free… that will be a fun race to watch.