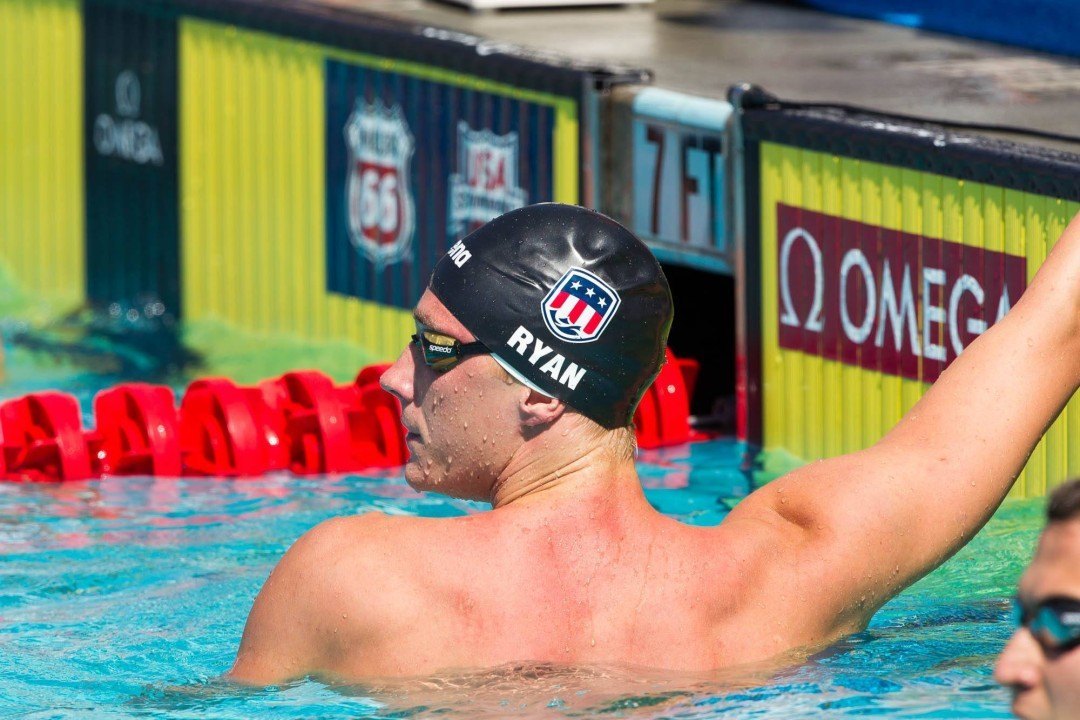 Celebrating the fact that he’s now able to officially represent Ireland internationally as of May 14th, Shane Ryan clocked his first national record while competing in London this morning.

In his first swim of this first prelims session of the 2016 European Aquatics Championships, 22-year old Ryan raced his way to the 3rd seed in the men’s 100m backstroke, earning a time of 54.21. That mark now rests as the 4th-fastest of Ryan’s career, but his first official Irish National Record as he is now eligible to compete for his new nation after having completed a mandatory year of residence in his new home nation.

53.93 is Ryan’s fastest time so far this year, but was it was scored at a meet before he was deemed officially eligible. As such, entering today’s competition, the Irish National Record was held by 16-year old Conor Ferguson, who earned a mark of 54.41 in Bangor this past March.

Ryan trains at the SwimIreland NAC Performance Center and has already hit the qualifying standard for the Irish Olympic team in the 100m backstroke in March.

I wonder what the relationship between Conor Ferguson and Ryan is? Ryan coming in as an “outsider” and establishing the record

I saw how well Ferguson has been doing including today, at a young age and thought maybe he’s benefiting from the extra competition?

2
0
Reply
Lost in the Sauce

What were the requirements for Ryan to become eligible to compete for Ireland? Were his parents born there?

Lost in the Sauce – yes, Ryan’s father is Irish. Under Irish law, that gives him the right “by descent” to be an Irish citizen, though because he wasn’t born on the island, it’s not automatic citizenship and would have required at some point registration in the Foreign Births Register. That citizenship is back-dated to his birth.

Practically speaking, anyone with a grandparent born on the island of Ireland can get citizenship fairly easily. Once citizenship is completed, FINA’s rules are the same for every country, regardless of that country’s individual laws (that apply outside of the world of sports) regarding citizenship. Ryan has been living there since May, which was required after he represented the US internationally at… Read more »

Correct – while it’s fairly easy on paper to get his citizenship, there was A LOT he had to give up in the process. He still had a year or two of eligibility left at NCAA’s. He went to Penn State and put that on hold if not forfeited eligibility (not sure which) to do this. Ryan was a great swimmer out of PA, but wanted to get to the olympics. Suffice it to say, making the olympics in the 100 back is extremely difficult as a USA citizen. Making it as an Irish citizen is much easier, and given his father is Irish, it makes sense to do it this way for the Ryan family. Given the 2 options… Read more »