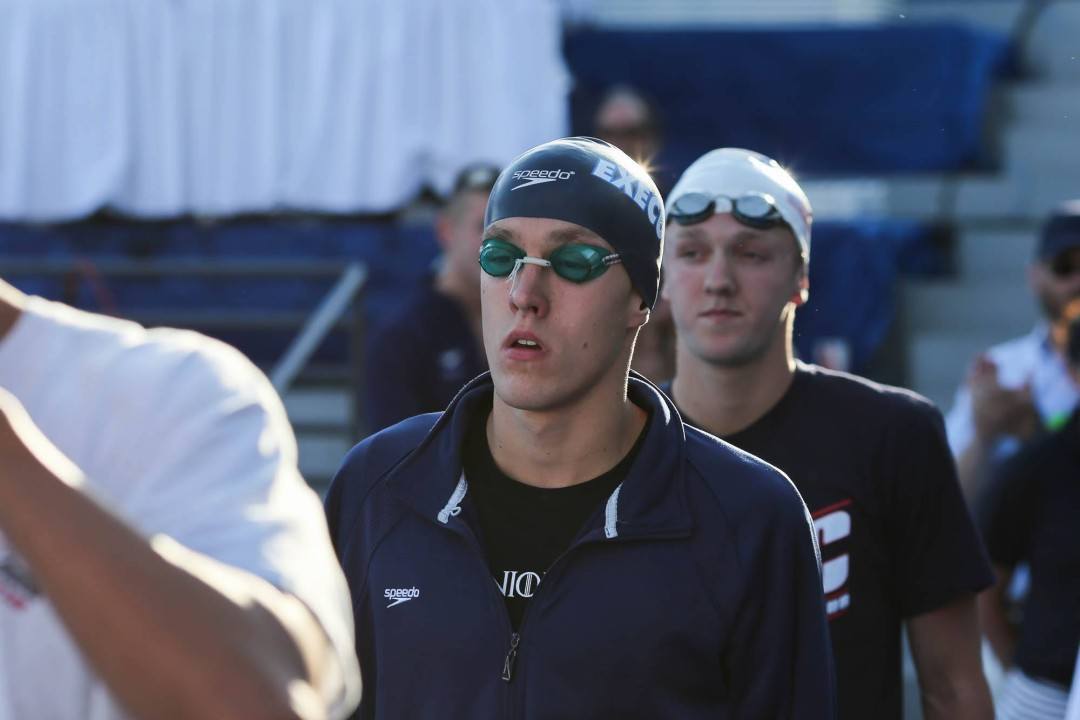 Spearheaded by back-to-back records to open the meet, the Notre Dame men and women downed in-state rival Ball State, with scores of 148.5-82.5 for the men, and 129-108 for the women.  Catherine Mulquin, Meaghan O’Donnell, Nikki Smith, and Katie Smith clocked a 1:43.02 in the women’s 200 medley to clear the old record by nearly 1.5 seconds, with Nikki Smith’s 24.50 fly leg serving as the difference-maker.  Mulquin and Katie Smith would later take part in the winning 200 freestyle relay.  In the men’s 200 medley, the Fighting Irish finished in 1:31.07, crushing the previous standard by 2.5 seconds, led by senior Trent Jackson’s 25.40 breaststroke split.

Notre Dame nearly swept every event, but Ball State got wins in both the men’s and women’s 100 breaststroke from Cullen Tyler (58.78) and Amanda Kedzierski (1:05.59).

Matt Grauslys was the other record-setter on the day; the sophomore better teammate Kevin Bradley over the back-half of the 100 backstroke to win, 50.12 to 50.32.  Both swimmers cleared the 50.78 pool record.

MUNCIE, Ind. – One week after a record-setting performance in the Shamrock Invitational, Notre Dame was at it again today breaking several pool records at Ball State. The Fighting Irish men beat the Cardinals, 148.5-82.5, while the women won, 129-108.

The women’s 200 medley relay team of Catherine Mulquin, Meaghan O’Donnell, Nikki Smith and Katie Smith broke the pool record with a time of 1:43.02. The former record stood at 1:44.47.

The men followed suit as the quartet of Jack Montesi, Trent Jackson, Justin Plaschka and Daniel Speers swam 1:31.07, which broke the previous pool record time of 1:33.65.

Matt Grauslys won the 100 back with a time of 50.12. His time broke the pool record of 50.78 that had stood since 2000. Teammate and fellow senior Kevin Bradley’s time of 50.32 was good for second place and also would’ve set the pool record.

NOTABLE DIVING
It was a great day on the springboard for the Fighting Irish men. Peter Meyers won both the 1 and 3-meter with scores of 283.35 and 314.55.

Cristian Herrera earned second place honors behind Meyers with scores of 248.55 and 280.80.

“It was nice to be able to travel in state and have the opportunity to compete. Hats off to Ball State for hosting us on their Senior Day.”

On what he enjoyed about today’s meet …

“Our team really enjoys internal competition, and we were able to create some great matchups today.”

On what is next for his squad …

“Now it’s on to championship preparation with different groups heading to the Ohio State Invitational and our women head to the ACC Championships in Atlanta. We have a lot going on and are excited about it.”

The Irish women head to Atlanta for the ACC Championships that get started Monday, February 13. The rest of the squad travels to Columbus for the Ohio State Winter Invitational on February 11-12. Fans can follow the meet on both team Twitter accounts, @NDWSwimDive and @NDMensswimdive. A complete recap of action will get posted to und.com.

The Cardinals started off the day with a second place finish in the women’s 200 medley relay, featuring senior Jessica Extine as the anchor. Extine was joined by freshman Anne Vormohr, junior Amanda Kedzierski and junior Andrea Richter for a final time of 1:45.29.

Extine also placed second in the 50 freestyle with a time of 23.99.

The men’s squad took third in the 200 medley relay with a time of 1:34.87. Seniors Tanner Barton andAustin Green teamed up with sophomore Luke Nondorf and freshman Ben Andrew for the third place finish.

Sophomore Cullen Tyler had the only first place finish for the men with a time of 58.78 in the 100 breaststroke.

The Ball State women’s swimming and diving team will be in action again at the MAC Championship meet Feb. 22-25.

The Ball State men’s swimming and diving team will return to action as they travel to Miami Saturday, Feb. 11. The meet is set to begin at 1 p.m.

For the most up-to-date news on the Ball State men’s and women’s swimming and diving team, please follow @BallStateSports, @BallStateWSwim and @BallStateMSwim.

Wow, what a performance by ND. I don’t think they have the firepower to beat NC State, but Louisville better watch out. When they are shaved and tapered, they are truly fighting Irish.

Not sure of your logic regarding ND beating Louisville. UL is extremely well coached, their athletes are disciplined racers also. I do not see any of the ND swimmers qualifying for NCAAs. ND might make strides in a few years up to the standard of UL.

Ball State University Men’s Swimming has 0 scholarship athletes and shares a budget with the women’s team.

Explains how a 50. backstroke is a pool record

Really tough pool to swim in. Shallow, flat end walls and drains on the sides every 10-15 feet that are the only gutter system. Don’t go into Muncie expecting fast times (.5-1 sec/25). Now saying that, a loud, intimate dual meet facility where the teams are on top of each other. GREAT dual meet environment!