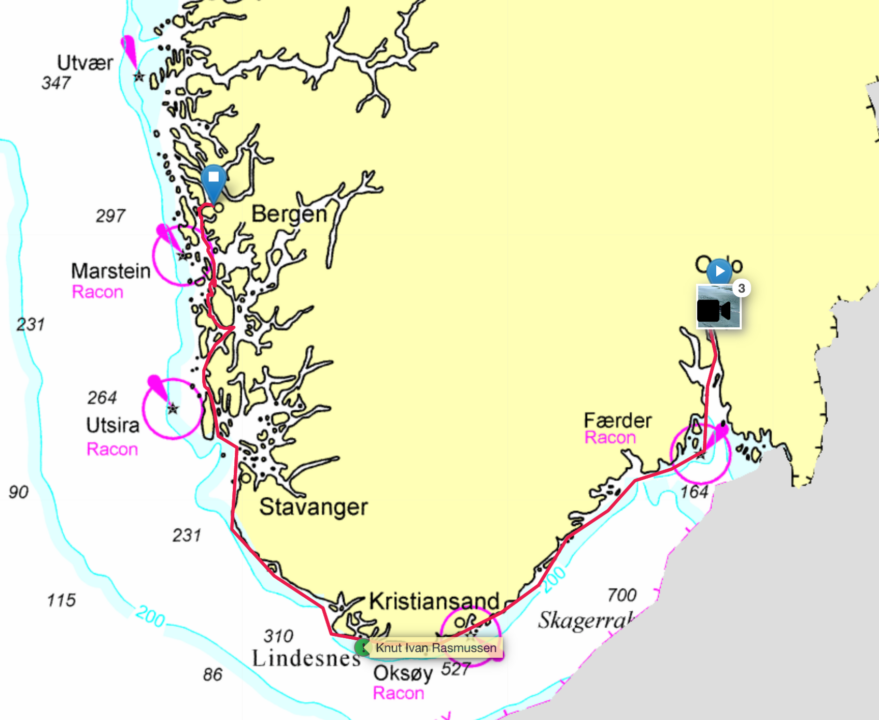 Rasmussen began his swim at the beginning of the month and is currently at about the halfway mark in the southern part of Norway. Current photo via Knut Ivan Rasmussen

Norwegian swimmer Knut Ivan Rasmussen is currently swimming more than 700 km (about 435 miles) in the Northern part of the Atlantic Ocean.

Rasmussen began his journey on July 1st and is currently at about the halfway mark around Lindesnes at the southernmost point of Norway. He is about 340 km away from Oslo, the capital of Noway.

Update: He completed the whole swim on August 17th around 2:55 p.m. and went to shore in Bergen.

Currently, Rasmussen is going up towards Bergen along the coast of Norway. His coach Rune Christensen told SwimSwam that this is the hardest part of the swim because it takes a long time and energy away, especially with the big waves.

This part of the swim also gets difficult as Rasmussen will be swimming against the water currents.

Rasmussen’s journey can be followed along via Facebook group here, live tracker of his swimming here, and his Instagram page here.

Outside of open water swimming, Rasmussen also competes as a master’s swimmer in the pool. Notably, Rasmussen attended the 2019 World Masters Championships in Gwangju, South Korea. There he competed in the men’s 40-44 age group. He finished eighth in the 200 butterfly swimming a 2:27.94, eighth in the 400 IM swimming a 5:12.94, and eighth in the 800 freestyle swimming a 9:31.74.

Rasmussen told SwimSwam that the goal of his 700 km swim is “simply to realize something I have envisioned for a very long time. I just feel I am meant to do things like this, it is just part of who I am. I love adventure, and I enjoy pursuing the sense of freedom that comes along with it.”

He also told SwimSwam that one of his biggest accomplishments as a swimmer so far has been his “100 km non-stop swim in 2014 (the Oslo Fjord), that took me 37 hours. Another is the bronze in the Masters World Championship 3 k open water.”