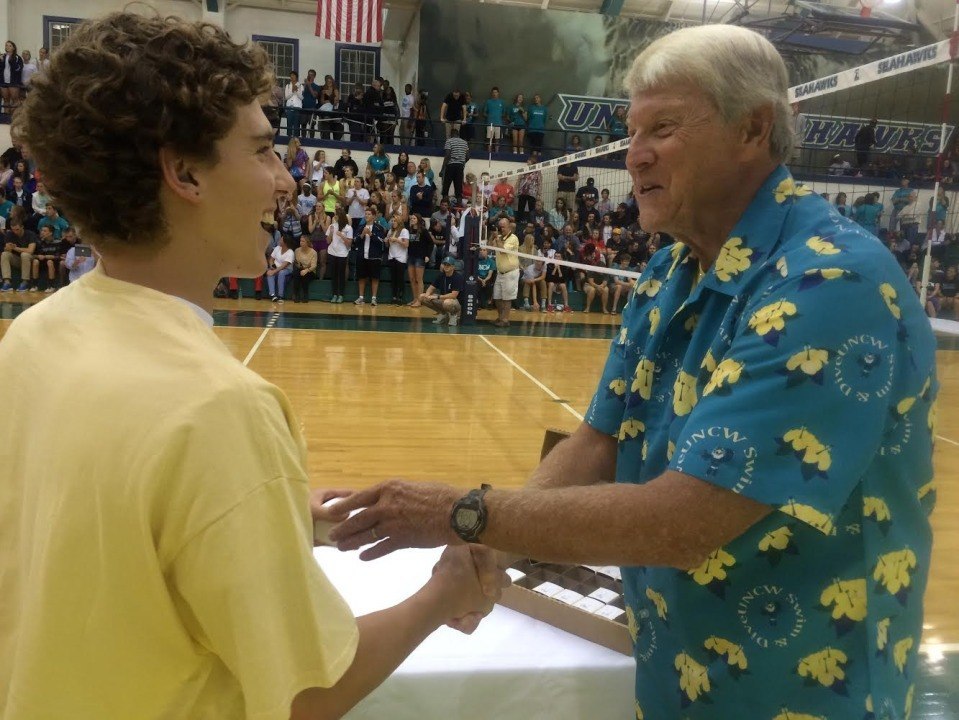 UNCW coach Dave Allen (right) is one of 5 individuals who will be inducted into the North Carolina Swimming Hall of Fame on Friday.

Two will be inducted based on their coaching resumes: former UNC Wilmington head coach Dave Allen and former Mecklenburg Aquatic Club (now SwimMAC Carolina) head coach Jeff Gaeckle. 1 is being inducted based on their swimming resumes: North Carolina native, former National Age Group Record holder, and 14-time collegiate All-American Todd Torres. The class includes a diver, 2011 NCAA 3-meter champion and 2012 US Olympian Abby Johnston McGrath, who dove at Duke. The final inductee cuts across categories: former collegiate All-American Janis Hape Dowd, who was a school record holder in the 50, 100, and 200 yard breaststrokes at UNC; and who is a also a great financial benefactor of the sport of swimming, including funding the annual Janis Hape Dowd Nike Invitational meet at UNC.

David Allen a native of Rochester, NY, swam collegiately at Springfield (Mass) College and began his coaching career at Allegheny College in 1970-71.  He spent a year at Allegheny before becoming head coach at SUNY Potsdam where he compiled a 44-26 record with the Bears. At Potsdam, Allen’s squad captured the state championship in 1977 and was ranked No. 15 that year in the NCAA Division III poll.  In his final two seasons in New York, Allen coached five All-Americans and was voted State University of New York Athletic Conference Coach of the Year.  He was inducted into Potsdam’s Athletic Hall of Fame in 1977. That same year the University of North Carolina Wilmington was building a new natatorium and Dave was named head coach of the inaugural UNCW Men’s Team. As such, David became the founder and architect of UNCW’s swimming and diving programs. In his 37 seasons at UNCW before retirement in 2014, Allen coached 15 All-Americans and 155 conference champions. Six of Allen’s swimmers have been inducted in the UNCW Athletic Hall of Fame. During Allen’s tenure the Seahawks racked up 494 dual meet victories and 16 Colonial Athletic Association championships, including 13 straight for the Men’s Team and three for the Women’s Team.  Dave was named CAA Coach-of-the-Year 15 times, including five times for his successful seasons with the Women’s Team and 10 times for his Men’s Team’s records. Allen and his wife, Ellen, have three children, Matt, Brian and Stephanie, each of whom attended UNCW and competed on the University’s varsity swim teams.

Jeff Gackle, attended Michigan State University where he was a Varsity Swimmer and served as Team Captain in 1979. After graduation Jeff moved to Charlotte, NC, and in 1981 became the Head Coach of Mecklenburg Aquatic Club (MAC). During his 12 years as Head Coach at MAC, Jeff built the club into one of the state and country’s premier age group swimming programs. His club athletes included U.S. Olympic Team members, National and Junior National Champions, State Champions, and National and State Record Holders. He also founded and served as long-time manager of the high-profile UltraSwim international swimming Grand Prix competition held annually in Charlotte. Jeff served on the Board of Directors of MAC for 29 years from 1981-2010 and was President of the Board from 2005-2009. He continues to provide leadership to MAC as an advisor and CEO. Jeff served as a Board Member and head of the Marketing Committee for USA Swimming.  In 2006 Jeff led MAC in forming a partnership with USA Swimming and the United States Olympic Committee to create the country’s first “Center of Excellence” in the sport of swimming.  This center, housed at SwimMAC Carolina, serves as a training center for post graduate and professional swimmers seeking berths on the U.S. Olympic Team.  As founder of Carolina Pool Management (1994), operator of 300 summer swim clubs throughout the Carolinas; founder of The Pool Management Group (1997), a parent company to 16 pool management companies around the country; and partner in the Paddock Evacuator Company, which is dedicated to improving air quality in indoor swimming facilities, Jeff also has had a very successful business career in aquatics.

Janis Hape Dowd, was born in Gary, Indiana. She grew up in Pittsburgh, PA and started swimming at the age of 10. at Sewickely Y.  She attended North Allegheny High School until her senior year, winning several State Championships as well as the 100 breast record.  She swam for the Pitt Aquatic Club and trained with Bob Miller during the summer at Totem Lake Swim Club in Kirkland, Washington.  She graduated early from HS to train with him for the 1976 Olympics. As a member of Team USA at the 1976 Summer Olympic Games in Montreal, Canada, Janis competed in the women’s 200-meter breaststroke and recorded a best time of 2:45.57. After the Summer Games, Janis attended college at the University of North Carolina Chapel Hill. Janis was a varsity swimmer on the UNC Women’s Swim Team and top competitor in breaststroke and the medley relays (200 and 400 yard) from 1977 through graduation in 1980. She was named All-American in both her freshman and sophomore years, and established new UNC records in the 50, 100, and 200-yard breaststroke events. Since graduation Janis has been living in Charlotte, NC, where she continues to support the sport of swimming. Janis, together with her family, is a benefactor of the USA Swimming Foundation, USA Swimming, and her alma mater’s Men’s and Women’s Swim Team programs. Janis helped found and fund the annual Janis Hape Dowd Nike Invitational, which features a number of the country’s top collegiate programs in a multi-day competition hosted by UNC at Koury Natatorium. Janis is married to fellow UNC alum Frank Dowd IV and has three children, Will, Diana, and Sally.

Abby Johnston McGrath grew up in Columbus, Ohio, where she began her athletic career as a young gymnast. She trained and competed for nine years before a back injury put an end to her gymnastics career. Shortly after, in 2002, Abby began diving and was quickly able to advance in the sport thanks to her natural talent. While in high school at Upper Arlington High School, Abby was a three-year varsity letter winner and two-time Ohio State Champion. Abby also became a USA Diving Junior National Champion on 3-meter springboard, a silver and bronze medalist at the Junior Pan Am Games, and a member of the USA Diving Olympic Medal Program (OMP). Abby went on to win the USA Diving national championship in 3-meter synchronized diving in 2005, 2006, and 2008. She subsequently enrolled at Duke and graduated with a psychology degree in 2013. While at Duke, in 2009, she became the first Duke diver in history to qualify for the NCAA Swimming & Diving Championships. In 2011 she became an NCAA Champion by winning the 3-meter diving competition, also making her Duke University’s first-ever NCAA Diving Champion. Beginning while she was at Duke, Abby was a four-time member of the USA Diving World Cup Team (2010, 2012, 2014, and 2016) and a finalist at the 2010 Diving World Cup. Her Junior year at Duke she made the U.S. Olympic Team and captured the silver medal at the 2012 London Olympic Games in 3-meter synchronized diving. Though she entered Duke Medical School in 2014, Abby continued to compete in diving at an Olympic level, and she closed out her Olympic career with a 12th place finish in individual 3-meter diving at the 2016 Rio de Janeiro Olympic Games

Todd Torres is a Tar Heel native who began his swimming career as an age group swimmer in Sanford before moving to Greensboro. In Greensboro Todd competed for the Greensboro Swimming Association (GSA) club and later for Grimsley High School. Todd became one of the fastest breaststrokers in the state and set both short course and long course records in the 200 breaststroke. After graduation Todd attended Louisiana State University on a swimming scholarship and became the most decorated athlete in the history of the LSU Swimming and Diving program. During his time at LSU, Todd set a national age group record in the 100 yard breaststroke, was a 14-time All American,  Southeast Conference (SEC) champion and NCAA Champion. During his collegiate years, Todd competed for the United States and won gold and silver medals at the 1987 Summer World University Games in Zagreb, Croatia and the 1991 Pan American Games in Havana, Cuba. Todd played a major role on the 1988 LSU team that became the only SEC Championship team in the history of the LSU program. That same team finished sixth at the NCAA Championships that year, making it the highest NCAA finish in the history of LSU Swimming. In recognition of these accomplishments, Todd was inducted into LSU’s Athletic Hall of Fame in 2015. After his collegiate career, Todd went on to compete in two Summer Olympic Games, in 1992 in Barcelona, Spain, and in 1996 in Atlanta. Representing Puerto Rico in the games Todd succeeded in placing as high as 12th in Barcelona in the Men’s 4x100m Medley Relay and finaling in the 100 meter breaststroke. Todd continues to swim and compete in Masters Competition as a member of the East Carolina Aquatics Masters Swim Team where he has set a number of new USMS National and World records. Todd is also currently serving as an officer of North Carolina Masters Swimming.

The 2019 N.C. Swimming Hall of Fame Induction Ceremony will be held at the Embassy Suites Hotel in Cary, 201 Harrison Oaks Boulevard, Cary, North Carolina 27513, on Friday, April 5, 2019. The evening’s festivities will start with a Cocktail Reception at 6:30pm, followed by Dinner & Ceremony beginning at 7:30pm. The Induction Ceremony is being held in conjunction with the North Carolina Masters Swimming State Championships in Cary.

Individual Tickets are available for $60 by visiting ncshof2019.eventbrite.com Sponsored Tables of 10 are $800 and are available by contacting:

Thanks SwimSwam and NC Swimming!