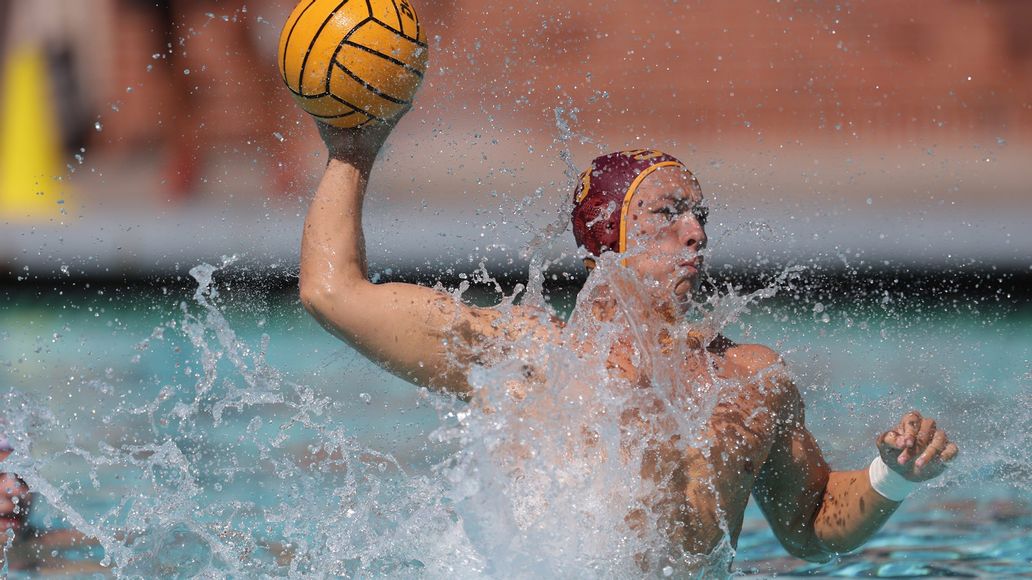 LOS ANGELES, CALIF. — The No. 5 USC men’s water polo team never trailed in a well-balanced home stand to beat visiting No. 9 UC Irvine 16-10 today at Uytengsu Aquatics Center. Ten different Trojans got to the back of the net while two Trojan goalies stepped up to protect it on the other end, led by Massimo Di Martire’s four goals scored and nine saves put up by goalie Blake Jackson in the win which improved USC to 12-4 overall.

The visiting Anteaters didn’t make it easy on their hosts early on. USC did manufacture a 5-2 lead with a balanced attack in the first frame, but UC Irvine carved that margin down to one in the second. A 5-4 scoreline seemed to spur the Trojans on, with Jake Carter coming up instrumental in a three-goal USC surge. He handed out assists to freshmen Evan Ausmus and Jack Vort while punching up a solo shot of his own, and USC moved ahead 8-4 entering the final minute of the first half. USC and UCI traded goals in that next stretch, as Di Martire answered an Anteater 6-n-5 finish with one of his own off a setup from Ashworth Molthen. That put a hat trick in place for Di Martire while crafting a 9-5 lead for USC at halftime.

USC continued to apply pressure in the next 16 minutes. Di Martire found his fourth while Carter cashed in on his second goal to take USC ahead 11-6. Jackson would snuff an Anteater 5-meter penalty shot next, and the Tony Nardelli earned and finished off a USC power play to build a 12-6 advantage in the third. In the fourth, Reed Stemler got in on the scoring action by putting away a penalty shot and later laying down the hammer for a 6-on-5 strike that had USC up 15-9. UC Irvine found a 10th goal three minutes later, but USC had the last word when Carter found Luke Brnetic for a sizzling score that wrapped the scoring to make it 16-10, with goalie Garrett Allen preserving that margin with a late save for the Trojan cause.

NEXT:
USC stays in home waters next week to host San José State at 12 p.m. on Saturday (Oct. 8) at Uytengsu Aquatics Center.