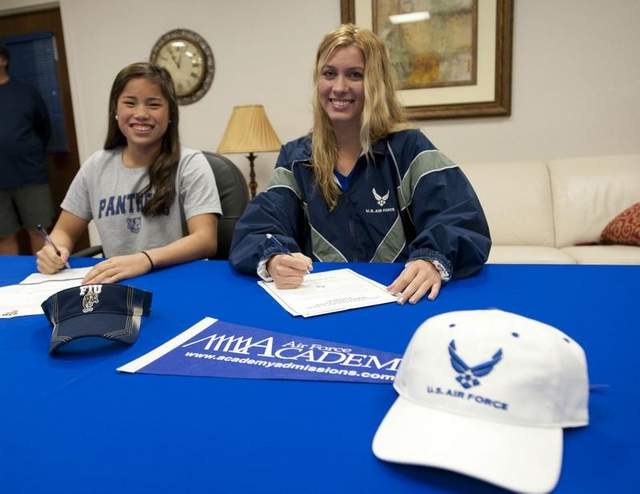 Jacquie Kinman, left, and Brianna Mount, right, from GPAC are two of the four swimmers will swim for Division I programs next year. (Photo Credit: Tony Giberson)

Four swimmers from Greater Pensacola Aquatic Club have signed their National Letters of Intent to swim Division I next fall.

Jacqiue Kinman will stay in her home state and head to Florida International University, Brianna Mount will hopefully (and very much likely) get an appointment to the Air Force Academy this winter, Olivia Weekley will head west to Arkansas, and Nate Thomas will leave the warm Florida sun and head north to Purdue.

Kinman and Mount are teammates at Washington High School, while Weekly and Thomas attend Pace High School. Kinman and Mount just ten days ago claimed the Class 2A Statie Title for the High School, the first ever Pensacola area team to win the state championship in swimming. The claimed state titles in the 200 medley and freestyle relays.

Weekley was a former gymnast, turned swimmer around the age of 11. She’s now a sprint freestyle and butterfly specialist. Her bests include 23.92 50 freestyle, 53.78 100 freestyle – which can quickly be improved at Arkansas, plus a 55.86 100 butterfly. Her versatility in the sprints will be valuable in the Razorback relays.