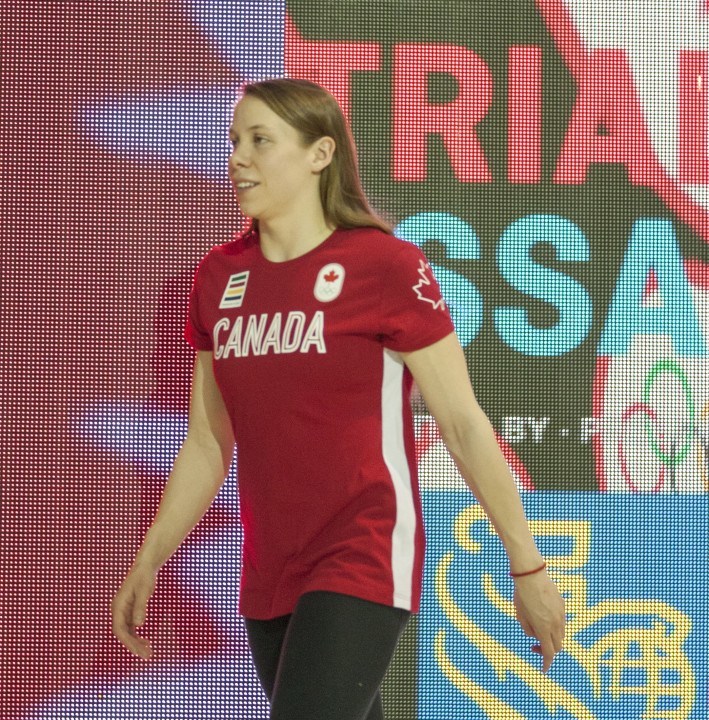 Rachel Nicol threw down a 30.84 PB in the 50 breast to move into 9th in the world at the Mel Zajac Jr. International in Vancouver. Archive photo via Chris Tanouye

The Mel Zajac Jr. International meet in Vancouver wrapped up tonight with some impressive swims from Canada’s senior swimmers, as they prepare for the upcoming World Championships in July.

2016 Olympic finalist Rachel Nicol cranked out a new best time in the women’s 50 breast, moving up to 9th in the world with a time of 30.84. Prior to tonight she had been 31.19 at Canadian Trials which had her tied for 19th in the world, and her best time sat at 30.86 from the 2015 World Championships in Kazan.

Richard Funk, Yuri Kisil and Markus Thormeyer all had dominant wins on the final night, representing the Canadian senior team. All three will head to Budapest this summer.

Kisil threw down a solid win in the 100 free going 49.35, less than two tenths off Brent Hayden‘s meet record of 49.16. With over two months until Worlds, 49.3 is a strong in-season time for Kisil, who will be looking to crack the final in Budapest after finishing 10th at the Olympics last year. The door is certainly open to do so, with two of the Rio finalists, Kyle Chalmers (gold) and Santo Condorelli (4th), both not competing.

Markus Thormeyer, who narrowly missed the Worlds standards at the Canadian Trials but was named to the team for relays, took 2nd behind Kisil in the 100 free in 50.60. He followed that up with a win in the 100 back about 16 minutes later, clocking 55.15 to drop more than three seconds from prelims. Robert Hill (56.34) and Tim Zeng (56.37), both on the Canadian senior team as well, took 2nd and 3rd.

Along with Nicol, the Canadian women swam well on the final night taking two more wins. Erika Seltenreich-Hodgson claimed the 100 free in 56.06 and Mackenzie Padington took the 800 in 8:37.99.

On the international side, German Johanna Roas from the University of Denver won the women’s 100 back in 1:01.29 over American junior Alexandra Sumner (1:01.61). Roas also placed 2nd behind Seltenreich-Hodgson in the 100 free.

Puerto Rican Andrew Torres, also from the University of Denver, won the men’s 200 fly in 2:01.95, with Connor Wilkins of Oakville and Nicolaas Dekker of the Richmond Rapids tying for 2nd in 2:03.26.