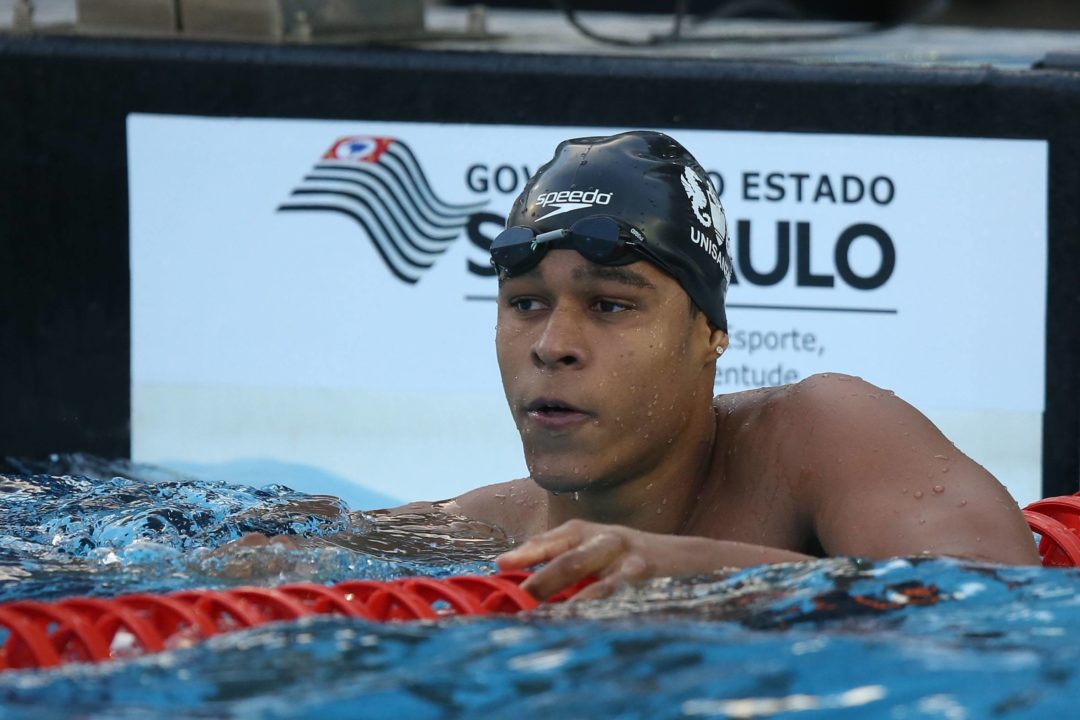 In what could be a seminal moment in the IOC’s efforts to improve national federations’ confidence in the relatively-new Youth Olympic Games, FINA’s newest Junior World Record holder Matheus Santana of Brazil has committed to skip the Pan Pac Championships in favor of the Youth Olympic Games this summer.

Santana took 2nd in 48.61 on Saturday to finish the Maria Lenk Trophy in Sao Paulo, Brazil. After his race, he said that rather than swim at Pan Pacs, where he could represent Brazil’s senior national team at their major meet for 2014, he would be swimming at the Youth Olympic Games in Nanjing, China.

Santana, pending ratification, is now the Junior World Record holder in the 100 meter freestyle. But rather than being on a Brazilian 400 free relay that is very capable (and in fact probable) to medal at Pan Pacs, he’ll instead contend against some of the better junior swimmers in the world.

Note that this is “some of the better,” rather than “the best.” For a meet with as prestigious of a title as the Youth Olympic Games, many swimming federations have been hesitant to send not only their best juniors, but even the best juniors who don’t qualify for their senior squads. For example, in 2010, at the first Youth Olympics, the Americans put priority on the JUNIOR Pan Pacs, and while this year they’ve left the option more open-ended, the feeling is that it’s still encouraged to go to Jr. Pan Pacs over the Youth Olympics. That’s partially because of limited event offerings at the YOG’s, and partially because smaller rosters (maximum of 4 boys and 4 girls for the top countries, 2 and 2 for lesser swimming nations) make it harder to send best relays.

For Santana to choose this meet over the senior Pan Pacs is significant, though. He’s definitely in Brazil’s plans for the 2015 World Championships and 2016 Olympics as they hope to medal there in the 400 free relays. For now, perhaps he’s seeking some closure after complications from his diabetes cost him a trip to the Junior World Championships next year.

This isn’t necessarily a bad thing, however, for the industry of swimming. More prestigious swimmers bring more prestigious attention to a prestigious-sounding meet, and as the IOC continues to push for growth in the Youth Olympics, the format will be changed and tweaked to better meet the developmental needs of the athletes. The marketing of sports relies a lot on how impressive something sounds. and Youth Olympic Games sound impressive, so the growth of that event will be good for the sport.

This could be good for Mateus, and definitely the Youth Olympics is slowly improving its quality, being held only for the second time.

So I’m sure there will be future worlds and olympic champions who will swim in Nanjing.