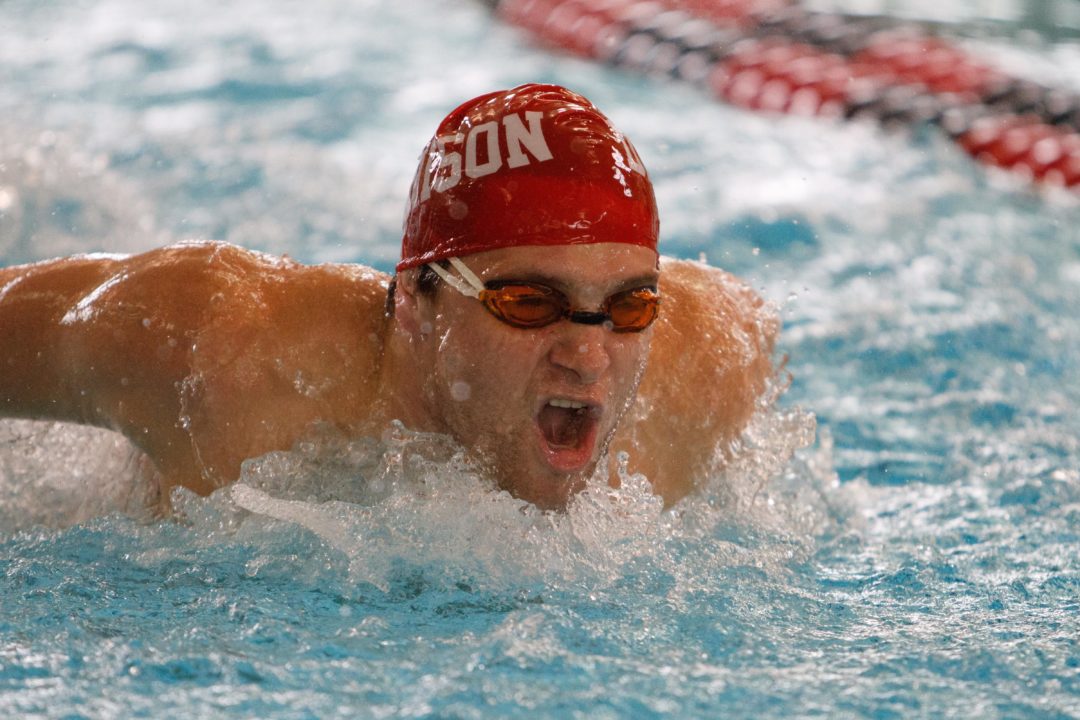 The men of Denison University continued to hold their lead through the final day of competition at the NCAC Championships while the women came from behind to catch and pass the Ladies of Kenyon.

The night began with Kenyon freshman Alex Seaver adding another individual title to his list in the mile. He posted a 15:36.03 to claim the crown, beating out PJ Fallon and Al Weik, both of Denison. Fallon was second (15:38.94) while NCAA record holder Weik came in third, touching in with a 15:40.47. Kenyon and Denison were pretty stacked in the top 9 of the mile; only Garrett Devenney of Allegheny and Joel Paquin from Wabash snuck in, finishing 8th (16:27.67) and 9th (16:34.33), respectively.

Harrison Curley picked up another title for Kenyon immediately afterward, winning the 200 backstroke by almost two seconds with a 1:46.38. In doing so, he reset the NCAC record set by Quinn Bartlet of Denison in the 2012 season (1:47.63), and came within a half second of the DIII A cut. He was joined in the top three by teammate Andrew Chevalier, who had been victorious in the 400 IM the night before; Chevalier settled for third in this race, putting up a 1:50.39 effort to finish behind DU’s Jackson Humprey (1:48.13).

Denison’s Conrad Wuorinen interrupted the start of a Kenyon title run by carrying off a victory in the 100 freestyle. He posted a 44.95 to win, resetting the pool record in the process and beating out Kenyon’s Joey Duronio and DePauw’s Alex Alfonso by almost half a second. Duronio and Alfonso tied for second with a time of 45.31. In the B final, Spencer Fronk and Andrew Rich went 1-2 with 45.98 and 46.03, respectively, earning Big Red more points.

In spite of the set back, Alex Beckwith and three other Lords stepped it up in the A final of the 200 breaststroke, sweeping the top four places. DU suffered a setback of its own with the disqualification of both qualifiers in the top heat (Al Nennig and Damon Rosenburg). Beckwith’s winning time was a 2:01.01 which set yet another NCAC record, this one set in 2009 by David Gatz of Ohio Wesleyan. The next two fastest times belonged to freshmen Lords Trevor Manz (2:01.35) and Ian Reardon (2:03.43). Mark Newell rounded out the sweep of places with his time of 2:04.90.

Casey Hooker of DePauw hooked another NCAC title for himself in the men’s 200 butterfly after coming up short in the 100 of the same stroke the day before. He posted the only time under 1:50, charging home to finish in a 1:49.85 to claim the crown. Kenyon’s Christian Josephson who dethroned Hooker last night in the 100 had to settle for second with a 1:50.20. Behind them in third was Denison’s Timmy Smith (1:52.98).

In the final event of the night, the 400 freestyle relay, the Kenyon Lords reigned victorious for the seventh year running. The team of Duronio, Percy Gates, Austin Pu and Austin Caldwell vanquished the competition with a 2:59.68, but the effort throughout the final day wasn’t enough to overcome the point gap DU earned from its numerical superiority in the diving events. Denison finished close behind with a 2:59.71, and DePauw rounded out the top three of the final event with a 3:00.61.

On the women’s side of the meet, the Ladies entered the final day of competition just a few points ahead of Big Red. The mile went Denison’s way – Taylor Johns and Campbell Costley went 1-2 with times of 16:46.91 and 16:51.02, respectively. Mariah Williamson of Kenyon, the defending champion in the event from last year, led until the 500 mark when Johns began inching by her. It wasn’t until the final 50 of the mile when Costley caught and surpassed the Kenyon sophomore, though. Williamson’s 16:51.20 is less than three seconds off the varsity record she set at NCAAs the previous year.

Denison kept up its momentum in the 200 backstroke with Molly Willingham taking the victory. She dropped over a second from prelims to finals, posting a final time of 2:02.24 to win. Teammate Elizabeth Dalziel joined Willingham in the top three as the third place finisher with a 2:03.33. A freshman from Wooster, Courtney McGovern took second place honors with a 2:02.49. Oberlin’s Lauren Wong dropped two seconds to win the B heat in finals, with a 2:07.01.

The women’s 100 freestyle finals saw a step in the right direction for the Ladies. Sophomore Haley Townsend took top honors in the event with her 51.01 a hair’s breadth ahead of DU freshman Carolyn Kane (51.03). NCAC champion Jourdan Cline joined her Kenyon teammate in the top three by edging out another Denison athlete by .01. Cline’s final time was 51.34. The only non-Red or Purple athlete in the A final was 7th placing Caroline Bridges of Depauw (51.69). In the B final, Big Red went 1-2 with Tully Bradford and Rina Jurjus touching with 52.09 and 52.29, respectively.

Natalie Lugg swung right back for the Big Red to claim the 200 breaststroke title in her senior year. Her final time was a 2:17.40, over a second ahead of second place Katie Kaestner (2:18.46). Lugg was joined by teammate Marissa Bednarek in the top three of the breaststroke. Bednarek’s 2:20.13 was good for third place. The Ladies minimized the damage by having three other swimmers in the A final.

The women’s 200 butterfly went to another DU swimmer, this time Michelle Howell. Howell was runner up in this event last year, but took the opportunity to shine. She posted a 2:05.13 to win, cruising in to the victory ahead of DePauw freshman Angela Newlon. Newlon – NCAC record holder in the 500 freestyle after the first day – clocked a 2:05.86 for runner up position. Krysta Garbarino – another DU athlete – was third in 2:06.07. Kenyon’s Megan McLaughlin dropped three seconds to win the B final running away with a 2:08.24. That time would have put her fourth in the A final.

The diving competition gave the Ladies another NCAC title, but bolstered Big Red’s point values more. Maria Zarka, the national champion on 3 meter from last year’s NCAA meet, as well as the NCAC champion on 3 meter from earlier in this meet, posted a score of 450 even to win the diving competition by a landslide. Emily Capone of Allegheny was second (372.20), but the trio of DU divers going 3-4-6 gave Big Red the boost it needed to overcome the Ladies.

In the final event of the evening, unless Denison was disqualified, it was pretty much a wrap for winning the meet. Kenyon posted a new NCAC record in the 400 freestyle relay to hold off Denison’s squad. The team of Cline, Townsend, Hillary Yarosh and Jenner McLeod turned in an exuberant effort, culminating in a 3:23.34, which is also a new varsity record for the Kenyon Ladies. Denison’s second place relay touched in at 3:23.50, followed by Depauw in 3:29.44.

Maria Zarka was the Female Diver of the Meet. Natalie Lugg was hailed with Female Swimmer of the Meet. Jessen Book earned Coach of the Year honors for women’s swimming.

Big Red can’t hide behind they’re diving as much come nationals time. Kenyon out swam DU by over 200 points in addition to not resting or even scoring some of their top guys. Everyone in D3 knows who the superior swim team is.