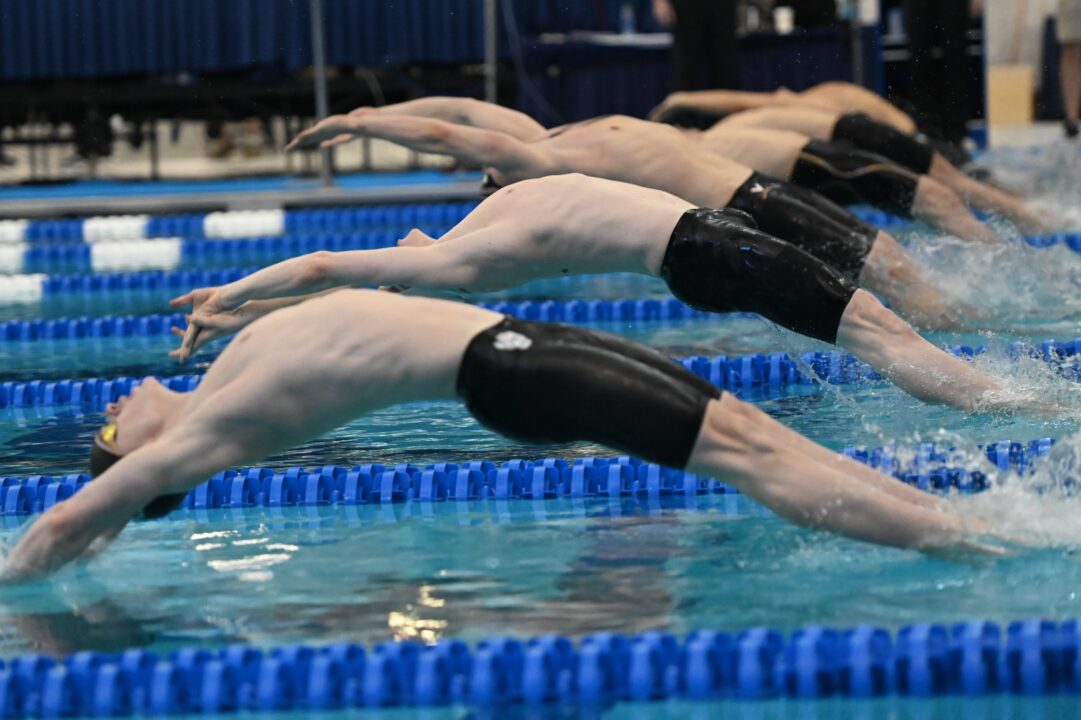 One rule change proposal before the NCAA Swimming & Diving Rules Committee would allow athletes to compete in an unlimited number of events in dual meets. Archive photo via NCAA Photos

The rule change would specifically affect dual meets, double-duals, triangular meets and quadrangular meets. The rule notably does not apply to invitationals, or to the NCAA Championships.

The NCAA goes through a rule change process every other year. This year, the Rules Committee will consider a number of rule changes that could go into effect as part of the 2021-2022 and 2022-2023 rulebooks.

SwimSwam has obtained a list of the proposed rule changes. We’ll run through some of the more notable ones below:

Current rules put limits on how many events each athlete can enter for dual meets. Dual meets, double-duals, triangulars and quadrangulars have three different event formats: a 13-event lineup, a 15-event lineup, and a 16-event lineup.

The rule change would lift those limitations for all three event lineups, allowing coaches and swimmers to determine how many events a swimmer can compete in during a single meet.

It’s worth noting that we already see some swimmers compete as exhibition in extra events beyond the limits. The new rule would allow swimmers to actually score points in those extra events. From a competitive standpoint, the new rule would increase the value of a versatile top-level swimmer. For example, someone like Beata Nelson could have swum the 100 back, 200 back, 100 fly, 200 IM and both relays in the same dual meet – provided she could handle that many swims in a short amount of time.

College coaches are somewhat notoriously reticent to place much value on dual meet wins or losses, though, so the rule change might have less significance to them than it does to fans hoping for more parity and more exciting dual meets. However, as you can read at the bottom of this story, survey results showed college head coaches overwhelmingly opposed this rule change at all NCAA levels.

NCAA rules requiring each school to compete in a minimum number of ‘bona fide’ competitions have caused some controversy among teams, particularly when finances are tight and meeting bona fide competition minimums requires extra travel costs.

One rule change would adjust the wording around USA Swimming or USA Diving events counting as bona fide competitions. The new rule would ensure that the NCAA Swimming and Diving Championship Committee could designate certain USA Swimming and USA Diving events each year as acceptable for hitting NCAA time standards, and those meets would also count as ‘bona fide’ competitions for a team provided enough athletes from that team were competing.

One rule proposal would standardize the size and distance of the lines on the bottom of pools in new facilities to match USA Swimming and FINA rules. The “T” at the end of the lane would be required to be two meters from the wall in new facilities. The rule does not require any changes to existing facilities.

A rule change would allow divers to wear kinesiology tape while in competition.

A couple of rule changes would allow meet organizers more leeway to use lanes as they see fit, based on the meet and facility. Specifically, one proposal would allow timed final relay events to be conducted in a different number of lanes than timed final individual events. Another proposal would allow meet organizers to use different seeding/lane assignment formats for individual and relay events. For example, a meet with multiple timed final heats of the 800 free relay could use 8 lanes for those relays, while still using 10 lanes for a timed final of the 1650 free.

The documents obtained by SwimSwam also reveal some results of 2020 and 2021 surveys asking head coaches and officials about potential and previous rule changes. Here are some of the high points:

The vast majority of coaches at all levels (Division I, II and III) said that allowing prelims heats to use more lanes than finals heats had a positive impact.

While head coaches were widely in favor of removing tape restrictions for divers and of standardizing lines on the bottom of pools, the other major rule change proposal did not fare so well among coaches.

Maybe allow one more swim ie, both relays and three individuals? A dual meet lineup is already pretty heavy for a short meet

On the flip side, swimming every event would be the most brutal lactate set even Greg Troy wouldn’t dare. Unless..

This rule goes through he’s back to the NCAA within the day.

Dumb. You could have 2 dominant swimmers win a dual meet. If they do this, the scoring system would have to be changed.

My college team would have benefited greatly from this change for the exact reason you said.

One of the benefits of 9-4-3-2-1, as I always saw it, was that winning the event guaranteed at least a tie of points in the event, even if the winner was the only swimmer from your team.

You can only score three swimmers in a race.

Under the 9-4-3-2-1 system, the 10 — 9 scoring balance referenced comes from having first and at least one other legal finisher to pick up the 5th place one point, as the other team is limited to only three scorers.

Can you only score 3?

Legs up with popcorn in hand