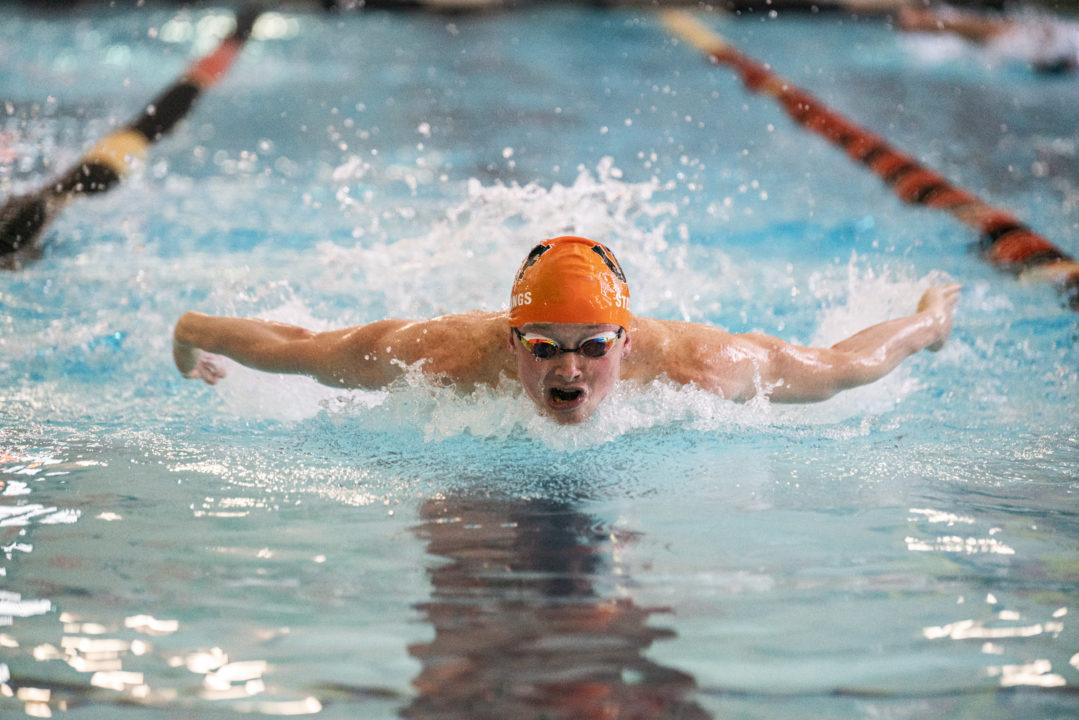 Victoria Beelner, the current S5 American record-holder in the 400 IM, has committed to swim at Emmanuel College beginning in the fall of 2021.

The University of Tampa men’s and women’s swimming teams defeated Nova Southeastern at the 2021 Shark Invitational on Sunday.

Lily Cunningham from Papillion-La Vista High School and iNspire Swim Club has announced her commitment to Gannon University’s class of 2025.

University of Findlay vs. Malone University

University of Findlay sophomore Tim Stollings had himself a weekend in a pair of independent dual meets against fellow NCAA Division II program Malone University.

Among a mountain of fast swims, Stollings swam a 46.02 in the 100-yard fly. That’s the fastest time in NCAA Division II dual meet history.

Other swims for Stollings across two days of competition include:

But those swimmers were all different than Stollings for a few reasons. Some of those swimmers, including Kusch, were much older than the 20-year old Stollings when they first broke 46.0. Kusch was already almost 24 in his first sub-46 swim.

Secondly, most of them were very fast swimmers already when their D2 careers began, owed largely to the Queens recruiting power when it was linked to David Marsh and his Team Elite program. Pijulet, a French swimmer, had been 54.3 in long course and 52.1 in short course meters by the time his Queens career began in 2016.

Kusch, a German, had been 51.9 in long course before his Queens career began. Ferrero, another German, was not as good as the others when he arrived but was Stollings’ age already when he arrived in the United States.

Josa was a top-tier American recruit who opted to stay close to home in Charlotte and start his career at Queens before eventually transferring to Cal.

While all of those swimmers improved to some degree at the College level, they were all much faster than Stollings when they arrived. Stollings came out of high school with a lifetime best of 48.11, which as a freshman he improved all the way to 46.53.

He’s now got more than half-a-second of clearance on the rest of the D2 programs in the country in that event.

The path to these results for Stollings haven’t been totally smooth, either, as Findlay, like many programs, has dealt with a number of COVID issues this season.

“This has been an interesting season,” head coach Andrew Makepeace said of his team’s year so far. “We had a meet on January 23rd at Ashland University and were happy with results and progress, so we lifted the following Monday morning, and then endured our second team quarantine of the year after some positive tests trickled through the team. So, we trained methodically over the next 17 days to prepare for this weekend. We trained effectively until Wednesday and then dropped off volume and intensity sharply until Friday. The rest speaks for our results. We originally planned to rest the same way for our meet with SVSU on February 6th, but that fell through because of quarantine and differing protocols.”

Findlay’s conference championship meet this season isn’t until the last weekend of March, rolling into April, so they had to use dual meets to try and get NCAA cuts. The NCAA Division II Championship meet runs from March 17-20 this year.

Stollings is confident that he can still improve on his 46.0 headed into championship season.

“I know what I can improve on after reflecting on my races to go faster,” Stollings told SwimSwam after his race. “If I make those changes, hopefully I can do a little better.

“It feels stress relieving to see those times. When I am in the pool, I am giving it everything I can, but with COVID-19 going on and the pauses, its tough. It is nice to see the work is paying off. To see the times on the board is a surprise, but a very pleasant one.”

His coach agrees, saying that he feels that the Oilers have more in their tank this season.

“Tim Stollings makes the magic happen for himself. That is why he will be a force at the NCAA Championships down in Birmingham,” Makepeace said.

Makepeace says he didn’t enter the year with any real expectations for his team’s results, but is happy with how they’ve dealt with the challenges.

“There has been a great deal of accountability on the student-athletes to earn their season by making decisions to allow for competition and training. When we finally competed at GVSU in January, and that was almost 10 months after our last meet, something most never thought would be taken for granted. I am elated about what we saw this weekend and given one more shot next weekend, I expect some more impressive performances. I feel our team’s confidence is skyrocketing now, and we want to keep that torch lit over the next 5 weeks.”

48.11 still seems pretty fast for a D2 recruit. I don’t know how many scholarships are out there for lower level power 5 teams, but would no schools in the Pitt/LSU/Utah/WVU class of D1 teams give money for a 48.11, given that most 47s go to upper tier programs? I’m sure some mid majors like Denver or UNCW would jump on the opportunity, but I guess if you’re working with well under 10 scholarships they can get locked up fast.

There’s a ton of reasons to choose D2 over a lot of mid-major (or even lower-level P5) schools if given the opportunity.

Wasn’t Ben Michaelson a 45.6 and should be on the list?

Ah, let’s not forget about Ben Michaelson’s 45.60 from 2003! I believe that was the third fastest 100 fly across all divisions that year.

You’re right – the databases don’t go back that far so I missed that one.

6
0
Reply
Coach
Reply to  JP input is too short

I think Ben’s time at d2 nats beat Crocker’s NCAA- winning time. But i might be wrong. Also, Ben was not close to those times before swimming at So Co..