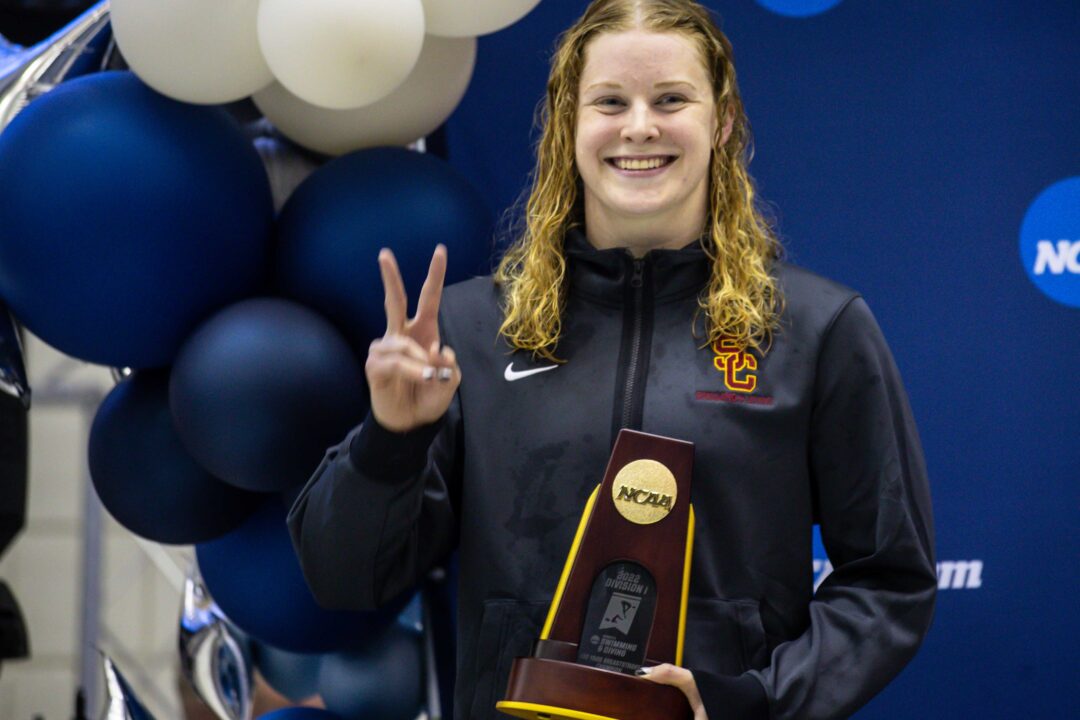 A total of 41 NCAA Division I swimmers and divers were named to their respective 2021-22 Academic All-District At-Large teams on Thursday as selected by the College Sports Information Directors of America (CoSIDA).

The recognition is earned by the nation’s top student-athletes for their combined performance both in athletic competition and in the classroom. Athletes are recognized across four divisions (NCAA Division I, II, III and NAIA) and eight different districts separated geographically.

The women’s honorees included 2022 individual national champion Kaitlyn Dobler, a USC sophomore who won the women’s 100 breaststroke at the NCAA Championships in March.

In 2021, Forde was also named the women’s CoSIDA D1 Academic At-Large All-American of the year.

*No D1 swimmers & divers were named to the District 6 team

You can find the full list of women named to their respective At-Large All-District teams across all four divisions here.

The men’s honorees include 2022 individual NCAA champion Drew Kibler, who won the 200 freestyle for the University of Texas at the national championships in late March.

Also getting named to an All-District team was Louisville’s Nicholas Albiero, who was the NCAA champion last season in the 200 butterfly and finished third in the event this year. Albiero was named to the All-District team last season as well and was also named the men’s D1 Academic At-Large All-American of the Year.

*No D1 swimmers & divers were named to the District 6 team

You can find the full list of men named to their respective At-Large All-District teams across all four divisions here.

No Regan Smith and Emma Weyant? Both of them achieved perfect scores with 4.00 GPAs as national champions back in HS.

Requires extreme dedication and discipline to achieve high level of athletic achievement while doing what’s necessary to maintain excellent grades. Congratulations to all who have achieved this honor!

Jake Foster gets nowhere near enough credit for having near-perfect pre-med (!!) GPA + MCAT score as well as managing to be all-American in all of his events. Mad props, hope he has a great senior year

How do you know his mcat score…

Carson posted it on his story

It circulated the UT insta stories a couple months back