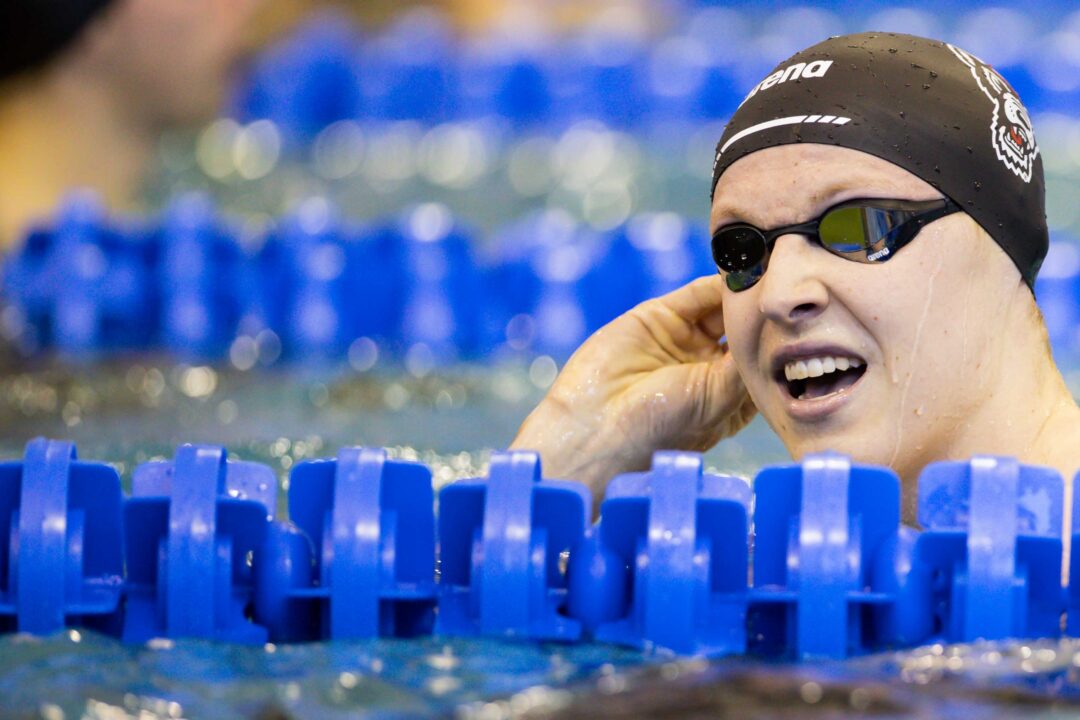 NC State’s Yara Hierath won her second event of the meet with a 4:16.88 in the 400 free. The rising junior also won the 800 free to start off the meet on Thursday.

Likewise, her teammate Abby Arens got her 2nd win of the week with a lifetime best and a win 59.04 in the 100 fly after winning the 200 IM on Thursday. Her teammate Kylee Alons was the only other swimmer under a minute, touching 2nd in 59.95.

Heather MacCausland made it three for three for the Wolfpack with a 1:09.17 win in the 100 breast. Her teammate Andrea Podmanikova took 2nd in 1:09.59. Both Alons and Podmanikova just wrapped up their senior seasons in Raleigh, but intend to return for a fifth year.

With only four teams entered in the 800 free relay, East Carolina Aquatics took the win in 8:33.00. The youngest two swimmers on the squad, Emily Armen and Adeline Cloutier, each split 2:06s.

The men’s side of the competition followed a pretty similar pattern. James Plage nearly got under the 3:50 mark with a 3:50.06 win the 400 free, with no one else within 8 seconds of his time tonight. That’s a new best for Plage, with his previous best of 3:51.41 coming from last summer’s Olympic Trials. Like Hierath, Plage won the 800 free on Thursday.

The Wolfpack men particularly dominated the 100 fly, taking the top three spots as those three swimmers battled it down to the final stroke. Luke Miller got his hand on the wall first with a 52.76 after going a lifetime best 52.64 in prelims. It was a battle of the Noahs behind him, with Noah Henderson just touch ahead of Noah Bowers, 53.05 to 53.06. The pair had previous lifetime bests of 53.40 and 53.41.

will scholtz is bae