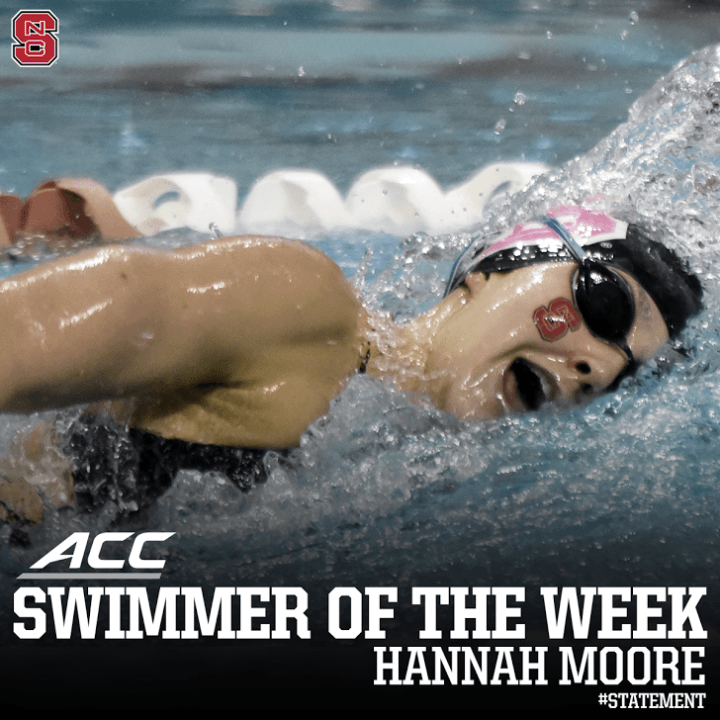 NC State swimmers Hannah Moore and Ryan Held, North Carolina diver Elissa Dawson and Pitt diver Dominic Giordano were named ACC Swimming and Diving performers of the week.
Moore took home three first-place finishes in the Wolfpack dual meet against No. 7 Texas earning her ACC Women’s Swimmer of the Week honors. The junior’s first-place time of 9:35.51 in the 1,000 free is currently the second fastest time in the nation. She met NCAA qualifying times with her performances in the 500 free (4:43.13) and 400 IM (4:15.35).
Dawson was selected as ACC Women’s Diver of the Week after placing in the top-two in each event in which she competed. The Tar Heel placed first in the three-meter dive (374.62) and second in the one-meter dive (295.43).
Both scores met NCAA Zone A qualifying marks.
Held scored 18 points over the weekend as the No. 3 Wolfpack topped two-time defending national champion No. 2 Texas, 173.5-126.5. The ACC Men’s Swimmer of the Week won both of his individual events in NCAA qualifying times: 50 free (19.49) and 100 free (43.10). The junior’s 100 free time is the second best time in the country. Held anchored the first place 200 free relay (1:18.86, 18.9 split) for the nation’s top collegiate time. The Illinois native continued his standout performance by anchoring the 200 medley relay team (1:27.10, 18.85 split), whose time ranks third nationally.
This is the third consecutive week Pitt’s Giordano earned ACC Men’s Diver of the Week honors. He continued his undefeated senior campaign by placing first in the one-meter (359.25) and three-meter (393.30) dive. Both scores met NCAA zone qualifying standards.
Swim news courtesy of ACC.