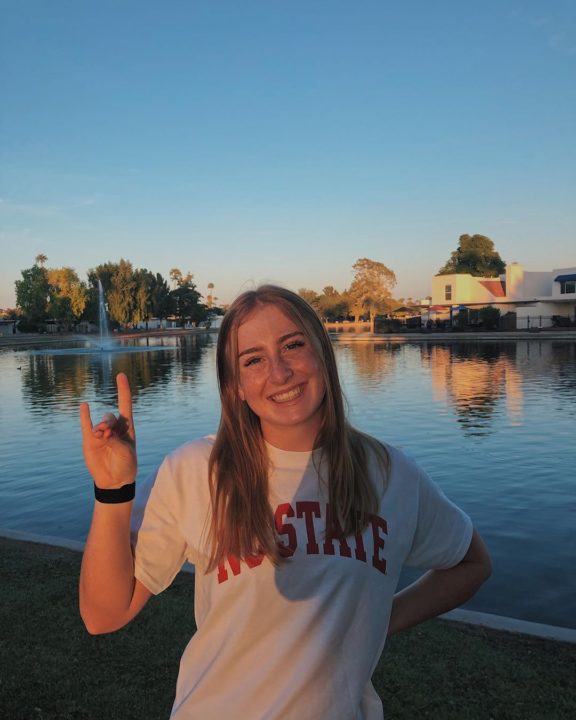 The spring Western Sectionals meet had two unique scheduling wrinkles. First, preliminary heats are being held at three different venues across the greater Phoenix area while finals are at one location. Second, the meet ran Friday through Monday which is unusual as most meets finish on a Sunday. Arizona State swimmers continued to pick up wins. ASU, which has red-shirted the 2020-2021 NCAA season, has used this event as an opportunity for their swimmers to race in a competitive setting.

North Carolina State commit Kennedy Noble picked up her third win of the meet in route being  the women’s high-point winner of the meet. Noble, a high school junior who swims with the YMCA Westside Silver Fins, won the race going away by over two seconds. Noble’s winning time of 1:56.18 was well off the 1:51.91 she swam a month ago. Chloe Isleta, an ASU alumna and teammate of Noble’s with the Silver Fins, took second in 1:58.81. Quinn Murphy of the Scottsdale Aquatic Club was the third place finisher in 2:00.13. Greer Pattison of SAC won the consolation heat in 1:58.94

Keaton Jones of Swim Neptune had a dominant performance in the men’s 200 back. Jones built over a two second lead at the halfway point. He continued to outswim the field, winning by over five seconds with a time of 1:43.19, less than a .50 off his best of 1:42.81. Robert Pearce of ASU, who was sixth at the 100 mark, moved ahead to finish second in 1:48.43. Pearce out-touched Nathan Lee of the Bellevue Swim Club, who placed third in 1:48.45. That was a best time for Lee and his first time under 1:49.

Erica Laning, the runner-up in yesterday’s 200 free, earned her first event win in the women’s 500 free. Laning and Ashley Strouse of SAC were neck and neck throughout the race. Laning’s third 100 was the key as she took home the win in 4:43.84 with Strouse just behind in 4:44.46. Laning was off from the 4:37 she swam at last year’s Pac 12 meet. Her time from yesterday would have placed her 18th at last week’s NCAA Women’s Division I Championship. Mia Rankin finished third in 4:49.44

A pair of Sun Devils led the way in a right race in the men’s 500 free. Gordon Mason of ASU swam a 4:24.51 at the beginning of the month and improved on that race in Phoenix. Mason, an open water specialist, dropped four more seconds yesterday winning in 4:20.18. Right behind Mason in second was teammate Andrew Gray in 4:20.51, about three seconds off of his best time. Third place went to Daniel Matheson of SAC in 4:21.30, within a second of his best.

Lydia Jacoby, the winner of the 200 breast earlier in the meet, picked up the victory in the 100 as well. Jacoby, swimming unattached and a Texas commit for the fall, was the only woman under 1:01 in this event. Her winning time of 59.35 was an improvement from her previous best time of 59.46 from February. Eva Carlson, of The Dolphins Swim Team in Portland, was second in 1:01.59. Abigail Maoz of Lake Oswego Swim Club finished third with a personal best time of 1:02.28.

ASU swimmers went 1-2-3 in the men’s 100 breast. John Heaphy led the pack by nearly two seconds as he broke the 53 second barrier for the first time to win in 52.98. Elijah Warren came in second in 54.76. Jordan Dunn took over half a second off his previous best to place third in 54.91.

Men’s high-point winner Grant House picked up his fifth win of the weekend. House’s time of 45.84 was another best time for him as he dropped .15 from the 45.99 he swam earlier this month. Using the USA Swimming database as the standard, House had four lifetime best swims out of the five events he swam at the meet. ASU swimmers joined House on the podium with Cody Bybee in second (46.27) and Alexander Colson (46.63) in third. That was a best time for Colson as he swam a 46.76 a few weeks ago.

SAC would win their fourth women’s relay event of the weekend as Pattison, Brophy, Stephanie Sifferman, and Strouse teamed up to win by over two seconds in a time of 3:21.83. Elevation Athletics out of Colorado took second in 3:23.19. Tualatin Hills rounded-out the top three in 3:24.05. Note: splits are unavailable for this race